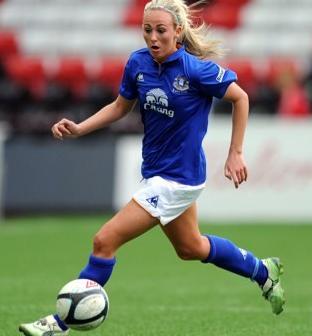 Everton Ladies forward Toni Duggan is one of the brightest emerging talents in the women’s game in this country at present and although she recently made her way into the England squad, with a dream trip also lined up for her 21st birthday, home is undoubtedly where the heart is for the Liverpool-born starlet.

Toni, 20, joined Everton at just 11 years old and has become a standout figure for the first team in recent seasons with pace and innate goalscoring ability on display all through her development taking her into the international reckoning with her call-up to the senior squad last month. As will be discussed, her native surroundings are reflected in her personality and feelings towards her team, but they also show up in her music choice too!

“My favourite music I would say is dance music – coming from Liverpool it is very big here. My favourites would be DJs like Avicii, Calvin Harris, Swedish House Mafia, David Guetta, that type of thing, although I do like r&b too and my favourite artist would have to be Rihanna, she’s amazing at what she does.”

The first festival she mentions was one I went to myself in 2009 but Toni also got to see Australia’s eternal pop princess while at the 2008 FIFA U-20 Women’s World Cup, a tournament in which she scored twice for England en route to reaching the quarter-finals. 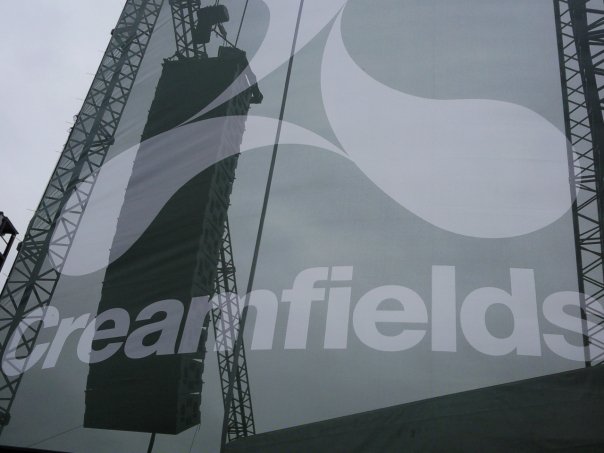 “Yeah I’ve been to Creamfields, a huge dance festival in Liverpool, I have also been to the White Party in Barcelona which was amazing. I have been to many concerts including Rihanna, Katy Perry, Take That, Westlife, Coldplay, but the one that stands out for me and is a bit random is seeing Kylie Minogue at the Under-20 World Cup in Chile… that was amazing!”

While the first ever tape or CD she bought is a pretty standard late 90s offering it was more than likely her own renditions of it she came up with as a kid that ultimately led (on some level at least!) to her rousing performance in front of her Everton teammates some years later!

“Wow that was some time ago, I’d have to say it was S Club 7 or maybe B*Witched, I loved all that cheesy music when I was younger and would practice dance routines to it all the time. I do it (singing) without thinking about it, but there has been the one occasion, which all the girls at Everton will remember, when I sung ‘I Will Survive’ by Gloria Gaynor.

“We were in Lithuania for the Champions League and I got up singing and dancing. That was a performance in itself, however it did put me off for life, I’ve never lived it down – must have been so good!”

Music tastes throughout the team is something I’ve gone through in detail since the start of this site, with some interesting and often spectacular responses along the way, and it is something of a much-discussed topic for Toni and the other players at the club too.

“It’s funny you say this because we have this debate every week with who the best DJ is. At the minute hands down it’s DJ Dan Hill (goalkeeper Danielle Hill), she sorts out the music on the team coach and in the dressing room and it varies from Usher to Cheryl Cole to Avicii to Tina Turner, it really is random.”

Toni’s Gloria Gaynor performance was memorable for those who saw it but the rule of new players singing hasn’t yet become a staple part of being an Everton Ladies player. However another of the England internationals in the team, (confused by some people apparently with her r&b singer namesake!) does like to provide some robotic moves!

“Not so much singing, we don’t have that initiation at our team, although we must introduce it. Jill Scott likes to do dances for us – she’s like Peter Crouch.”

Making her club debut at the early age of 15 Toni would go on to feature prominently in the 2010 FA Women’s Cup final in which Everton defeated Arsenal 3-2 after extra-time at Nottingham Forest’s City Ground. She provided the cross from the left for England mainstay Faye White’s own goal to temporarily put Everton ahead at 2-1 before Natasha Dowie would go on to win the game in the 119th minute. In the 2010/11 Champions League Toni was a key part of the Toffees side who hammered opposition from Macedonia, Lithuania and the Faroe Islands in the group phase before convincingly beating MTK Hungaria and Brondby, though German outfit Duisburg knocked the team out at the last 8 stage. As I alluded to early on although Toni has been to a whole host of places through football already despite her young age there is still that feeling of ‘home sweet home’ in her life and career to this point. 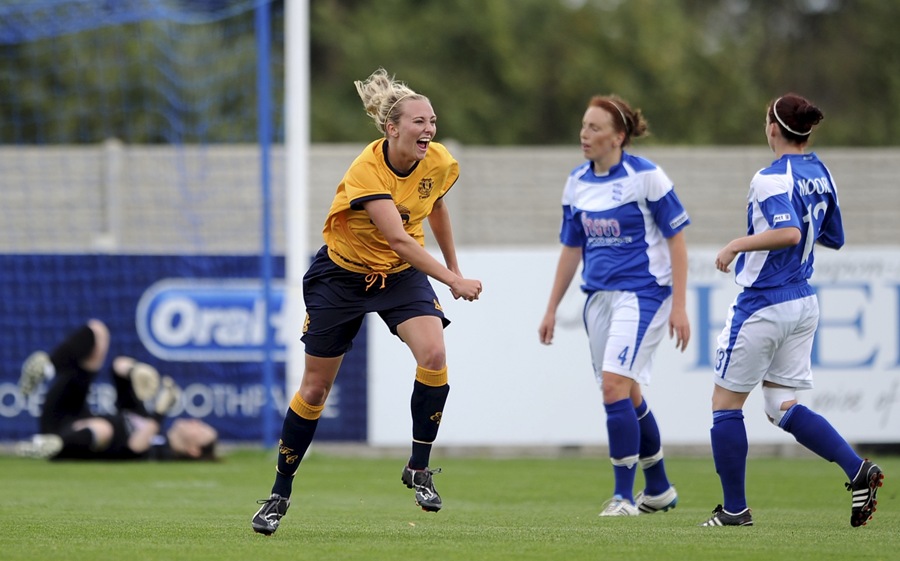 “I’m from Everton, right in the middle of the city, and I love it here. There really is no place like home, especially Liverpool, it’s so different to anywhere else.

“I have loved playing for Everton, I have had the same manager since Under-12s and all the girls have known each other for years so it works well.”

She has also been contributing to the women’s game in a local sense by launching a ladies’ league at the Liverpool North Goals Centre on Thursday nights to help more female players to get into the sport. Everton and Liverpool Ladies met at the end of May with the Blues winning 2-0 at Halton Stadium and while Toni is helping football in the city as a whole the two teams’ will to beat each other is as strong as ever when they meet.

“Yeah the rivalry is there of course, it’s the derby, I really look forward to them games, we always manage to get a great turnout so it’s always good when you win. I get on with a few of the girls at Liverpool but once you’re on the pitch everyone becomes your enemy until the final whistle.”

Everton were beaten 3-2 by champions Arsenal in April but Toni scored both of the team’s goals that day, including a superbly-executed goal past Gunners keeper Emma Byrne after five minutes, something I mentioned to her of course!

“It’s a good job you caught that one because I haven’t scored many since! Yeah it wasn’t a bad one to be fair, but personally I would have liked to have scored a few more.

“My role has changed this season, sometimes midfield, sometimes out wide and the occasional centre forward role. I’ve been happy with my personal performances but there is always room for improvement, I’d like to be getting on the scoresheet more often which is something I will be working towards.”

Mo Marley’s team secured an impressive 2-1 win away at Birmingham City last Sunday and with Arsenal leading the way in the FA Women’s Super League Everton are one of four teams currently tied in 2nd on 11 points from 7 games with goal difference placing them in 4th at present.

“The mood is really good, probably the best it’s been this season. The Birmingham game really lifted us as a team and I feel it was a great team performance.

“We’re taking each game at a time now but our ultimate aim has to be to qualify for Europe next season – anything less will be a disappointment.”

Toni has scored consistently at various levels for her country and in Belarus in 2009 she scored her 4th of the tournament on her 18th birthday as England beat Sweden 2-0 in the UEFA Women’s Under-19 Championship final. The manager was her club coach and former England international Mo Marley and the tournament success was a significant step in Toni’s development. That progression has moved up a notch further just lately with her first call-up to Hope Powell’s squad for the senior team’s Euro 2013 qualifiers with Holland and Slovenia last month.

“It was a long trip, ten days on the road but I must say I loved every minute of it. The standard of football was very good which made training really enjoyable and all the girls were great with me so there was that time for a bit of a laugh off the field.

“I’m hoping I get more opportunities in the next few months as that has always been my goal.”

This is the second season of the FA Women’s Super League and it is something I have discussed on here previously with Megan Harris (Lincoln Ladies) and Claire Rafferty (Chelsea Ladies), as well as talking about the Women’s Professional Soccer division (and its subsequent break-up) with US internationals such as Carli Lloyd and Shannon Boxx. While the league here is not a fully professional one as yet the implementation of it was bound to alter the everyday schedule of those who play in it and Toni, who works as a receptionist at present, is of course one of these to have experienced a slight change in her life as a result.

“For me it has changed a lot as prior to the WSL I was in Loughborough five days a week training and studying there on a scholarship and travelling home for games at the weekend. Now I’m at home working full-time and trying to fit in all of my training schedule.

“It can become very tiring but if you want to get to where you want to be you have to put in the hours. I do feel though that the new league is a massive step in the right direction and hopefully it can only get bigger, it would be great if one day we could all be professional and earn a living from playing football as it can be a real struggle balancing the two, football and work or uni.”

Her career on the field has been gathering momentum and all the suggestions point to more prosperous times to come but Toni is set to turn 21 on July 25th and the plans are in place to do it in style!

“Yes I think the whole world knows, well especially my followers on Twitter! I’m off to Vegas with my teammate Michelle Hinnigan and my England teammate Chelsea Weston (Birmingham City).

“They are both really good friends of mine and I am so excited as I have never been to America before never mind Las Vegas!”