In the US Women’s National Team, Lauren Cheney has been a mainstay as the player tasked with catering for all music tastes through her pre-game playlist, and with the Olympics in London fast approaching, her esteemed teammate, midfielder of 165 caps Shannon Boxx, is more than happy to leave the tricky responsibility to her!

Eagerly anticipating what will be her third Olympic Games, Shannon, one of the world’s leading defensive midfielders, allied with a creative attacking edge, believes that forward Cheney is the ideal national team DJ, as she’s proved.

“Lauren is still in charge, which is great. It’s stressful to find the right mix to play in the locker room ’cause our team has such different tastes but I think she does a great job.

“I have put my iPod on a couple of times and the girls have liked it but I don’t want the stress before a game.”

A prominent performer in three World Cups, California native Shannon made one of the West Coast’s all-time hip-hop standouts the first addition to her music collection as a kid, managing in the process to get around the parental advisory label!

“I was probably around 12 and I bought Eazy-E. No idea how I was allowed to buy it but I did.

“I am very open to a lot of different types of music – I like hip-hop, r&b, alternative, rock, and I will even listen to some country. I mostly lean toward hip-hop and r&b, especially when I’m getting ready for a game.

“I will say the one genre I am not into is heavy metal. The mix of artists I am listening to a lot these days is Jay-Z, Kanye (West), Drake, Adele and Black Keys.”

In a career that has seen Shannon display resilience in light of injury as well as battling characteristics and no shortage of accomplished class, the two-time Olympic Gold medalist and third place in the 2005 FIFA Women’s World Player of the Year has found that another genre aside from the motivational music she draws on can have an excellent unwinding quality.

“I have been to a couple (of) country concerts, Kenny Chesney, which are so relaxing. I have been to see The Dave Matthews Band, which was great.

“The only music festival I have ever been to was in San Francisco. It was fun to walk around and hear a bunch of artists I had never heard before.”

Although it is something of a tradition for players here in England, especially new recruits as an initiation procedure, to sing in front of their colleagues, Shannon has so far avoided having to take on that nerve-inducing solo performance but as part of a trio she did blast out a Fergie rendition.

“Thankfully I have never had to sing in front of my whole team. I did sing with a couple of them at a karaoke bar – we sang ‘Big Girls Don’t Cry’ and I’m pretty sure we sounded horrible!”

Shannon and her older sister Gillian share the remarkable honour of being the only two American sisters to have won Olympic Gold in separate years and sports as Gillian, now a fire engineer and paramedic, tasted glory with the US women’s softball team in the 1996 games in Atlanta.

After attending South Torrance High School where she was a Parade High School All-American in soccer in 1995, Shannon was a big part of the Fighting Irish team at Notre Dame that won their first NCAA women’s soccer title in her freshman year.

She graduated in 1998 with degrees in psychology and African American studies in addition to sporting accolades such as selection three times for the All-BIG EAST Conference team before spending time with the Boston Renegades in 1999 and German team Saarbrücken.

Having spent the second of three spells with Ajax of Los Angeles in 2000 there were considerable doubts about whether the sport would provide her a sustainable future, but the formation of the Women’s United Soccer Association took her to the San Diego Spirit.

After joining the New York Power for the third and final year of the WUSA before it folded, Shannon’s form earned her a place in the All-WUSA First Team and the WUSA All-Star Team, as well as her first chance in the national team ahead of the 2003 World Cup.

She made her international debut in September 2003 scoring in her first two friendlies against Costa Rica and Mexico before also netting in the US team’s opening game of the World Cup in a 3-1 win against Sweden in Washington.

As well as scoring the USWNT’s 1000th ever goal in a 3-1 victory over Canada as the US came in third place, she was named in the tournament’s All-Star Team and the following year would start all six games of the 2004 Olympics in Athens.

After scoring in the opening game against hosts Greece she helped the team on their way to Gold after defeating Brazil and they would repeat the glory against the same opponents four years later in Beijing.

Having had such success already on the big stage the mention of an opportunity to compete for a third successive Gold this summer has Shannon looking ahead with great feeling as she reviews the previous triumphs. 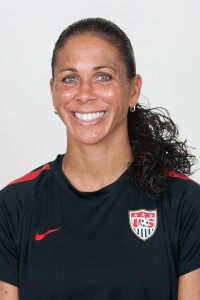 “Yes I am so excited about the Olympics in London, I have only been there once and I loved it. Each Olympic Games have been so different from each other.

“Athens was my first experience and I was a new player on the team, we had our veterans who were playing in their last Olympics and I felt like we wanted to win for that group of players. In China I now was one of the veterans (at 31) and I felt like we were a closer group as a whole, we lost one of our best players right before and we had to figure out how to come together to still be the best team.

“Winning the Beijing Olympics was amazing because each player had to step up and there wasn’t one superstar but 18 superstars, which was pretty cool.”

Shannon identifies a selection of players, from her own team as well as other nations, who she believes will be among the distinguished competitors in this summer’s tournament.

“The London games are going to be amazing – I honestly can’t wait for them to start. I think for the US team you are going to see Alex Morgan continue to stand out, of course Abby Wambach who thrives in big games, and Christie Rampone, a four-time Olympian who quietly goes about her job but is impossible to beat.

“For other countries I see (Louisa) Nécib from France, Aya Miyama from Japan, of course Marta from Brazil, Kelly Smith from England.”

The Women’s Professional Soccer league’s first season in 2009 saw Shannon allocated to the Los Angeles Sol where she was captain as the team came 1st in the regular season but were beaten in the WPS Championship game by Sky Blue FC.

Having represented the short-lived Saint Louis Athletica she would then be part of the FC Gold Pride team that won the WPS title in 2010 and she made the league’s All-Star Team for a second time in a row. 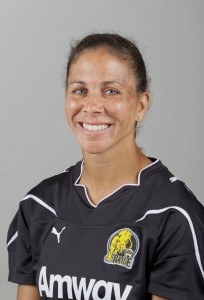 While remaining integral to the national team and going all the way to the final of the 2011 World Cup she spent time with the Florida-based team magicJack last year.

The team fell at the penultimate hurdle of the WPS Play-offs, losing to the Philadelphia Independence and recent weeks have brought about the news that the league would not be temporarily suspended as first thought but would actually fold after just three seasons.

Former US midfielder and Boston Breakers captain Leslie Osborne spoke on here last week about the need for the relevant organisations to come together to make women’s soccer a priority in the country and I asked Shannon how the news of the WPS’ demise affects her in the immediate future.

“When I finally heard the WPS was officially folding I was disappointed and sad that we still haven’t figured out how to make a women’s professional league successful in the US. My immediate plans are to continue to focus on the national team and helping to win an Olympic medal.

“After we will have to see what our coach wants us to do, some players may go abroad, we may have a residency with the national team. Right now everything is focused on this summer and we will have to figure everything else out after.”

When discussing men’s players she finds inspirational I also brought up the question of whether Shannon had a favourite team, though the suggestion I made to her of following the team I support, Sheffield Wednesday, brought a laugh!

“Sorry no I don’t have a favourite team! I watch more for individual players – I have always been a Paul Scholes fan because I feel he plays the way I play, works hard, not flashy, good on both sides of the ball.

“I like Frank Lampard, Yaya Toure, of course Messi.”

We’ve had the male competitors she derives enjoyment from watching and learning from so what about the female players (to clarify, these are specifically players she has played alongside who she would describe as the best)?

“Christie (Rampone) is the best one-versus-one defender in the world – there is no one else but her that I would want to have my back in the defence. Aya Miyama – I loved playing with her, her technical game is flawless and when we played with each other I always looked to her to combine with.

“Marta – she’s the best player in the world. Two things I love about her – one, she works hard on the field and she works hard in training, two, her speed and her talent to score goals will always make you look good, I would play an imperfect ball and she would make it look perfect.

“Kristine Lilly – she was great at reading the game and she always had your back. If you made a run or got out of position she would fill your spot until you could get back.

“From the first day I was on this team I would hear her screaming at me giving me directions – at first it scared me but as time went on I realised she was doing it to help me and make me a better player and I respected that.”

Shannon is now the fifth USWNT player past or present to feature on here since I started the site last year and she played the full game late last month as the US defeated China 4-1 in front of a sell-out crowd at PPL Park  in Chester, Pennsylvania as Pia Sundhage’s team continue to step up their Olympic preparations.

Away from the sport she will be launching her online t-shirt shop over the coming days and as I always look to bring in new ideas for the questions on here I asked what the perfect day would be for Shannon, who of course comes from such picturesque surroundings in California.

“My perfect day would be to have a barbecue with my friends and family down by the beach on a sunny day. I would enjoy relaxing, playing some sports on the sand and enjoying being together.”