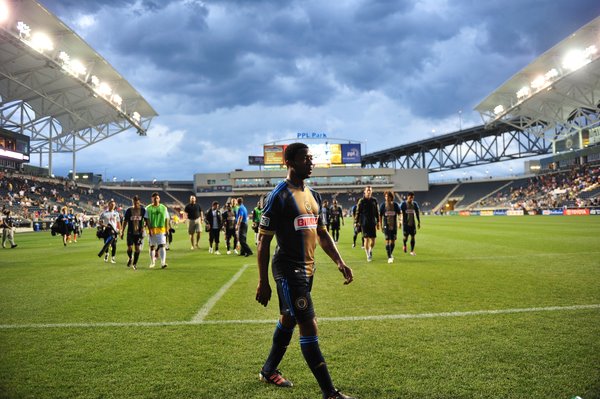 Having recently moved from the West to the East Coast, Philadelphia Union’s Sierra Leonean-born midfielder Michael Lahoud is adding new chapters to his tale as an MLS player, and with so much to write home about he has found music to be a therapeutic outlet in his time away from the field.

The 25-year-old joined the Union in May as part of the trade that saw captain Danny Califf move to Chivas USA in California and the burgeoning stages of Michael’s move have been positive, if ever so slightly linguistically different!

“California is definitely different from Philadelphia, everything from the weather to the people, but it’s been a good move so far. I’ve enjoyed the down-to-earth nature of most people I’ve come across, the people of Philadelphia are very supportive of their sports teams and it seems to be a big sports town.

“One thing I can’t get my head around yet is how people say ‘water’. When I hear it, it sounds like they’re saying ‘warter’, just got to get used to it I guess!”

While with Chivas Michael put together a track entitled ‘Livin’ The Life’ with his former Rojiblancos teammates Justin Braun and Chukwudi Chijindu with the subject matter exactly as it suggests, giving a taste of life from their viewpoint. There is the sense that music is high on Michael’s list of pastimes but understandably certain constraints for a professional player come into play meaning that getting in the studio is not always an immediately accessible option.

“‘Livin’ The Life’ was a very fun track to make, I really enjoyed it because it forced me to put myself out there in a big way. I’ve made some other songs over the years as well, I’m getting more courageous with my music, so if you guys want to listen to some new songs then check out my Facebook page.

“Music is a sense of release for me, it has become a way to say a lot of things I usually don’t express to most people. The amount of time I spend on music varies with such a crazy schedule, whenever I get free time you can find me humming or whistling a catchy tune in my head.

“Like most people I’m into a whole bunch of stuff, I’ve been known to like anything from hip-hop and r&b to alternative and indie rock. Some artists that I currently enjoy are Justin Timberlake, Timbaland, Frank Ocean, Ed Sheeran, Jason Mraz, John Mayer and James Taylor.

“I’ve got to admit that I’m not the biggest country music fan but we’ll see if that changes in the future. The first record I ever bought was The Offspring’s ‘Americana’, I was about 12 years old at the time and a bit new to the world of music.

Before buying that 1998 album Michael had spent much of his early years in the States having moved with his family from the conflict in his native Sierra Leone as a young child. Born in the West African nation’s capital of Freetown he would grow up in the Washington, D.C. area but the music of his origin would latterly come into his listening pleasures, a sound he finds extremely expressive.

“My Sierra Leonean heritage didn’t really influence the music I listened to until I was well into my late teens, as I’ve gotten older I’ve learned to appreciate African music. The sounds are very rhythmic and always make you want to get up and dance, even if it’s just a little bit.

“African dance contains a lot of loose movements that require your body to be relaxed. The movements are on cue to the beat and leave room for you to add your own personal touch.”

When talking about gigs and concerts Michael has enjoyed he gave a mention for the Los Angeles singer/songwriter John Torres, an acclaimed artist who fuses a number of genres and has sang with Grammy-nominated singer Sara Bareilles back in college, also inspiring her to write her first ever song.

“The concert I enjoyed the most was John Torres Live at Hotel Café in Hollywood, CA, John is a great up-and-coming musician who is also an amazing guy as well. Two years ago I went to a Train concert at the Greek Theater in LA, Need to Breathe opened for them and I got the treat of two great bands for the price of one ticket.

Michael’s former teammates Justin Braun (Montreal Impact) and Chukwudi Chijindu (Wilmington Hammerheads) as mentioned earlier collaborated with him on ‘Livin’ The Life’ and he speaks highly of their talents. He also references three other players who all either originate or have spent part of their career here in England, with one of the names the brother of Peterborough United defender Gabriel Zakuani, a past interviewee on this site.

“Justin and Chuck definitely have musical talent, Justin has a pretty decent knowledge of hip-hop and Chuck is one of the smoothest rappers I’ve met thus far. A few other players who are involved in music are Ryan Smith, Steve Zakuani, Patrick Kanyuka.

“Maybe you can talk them into collaborating on a track. Just a thought!”

Although Montreal Impact forward Braun was praised by Michael in the main he did reveal a slightly different musical penchant that his former colleague has when discussing some of the teammates’ selections he has witnessed.

“Most of my teammates have always had pretty solid tastes in music, during my time in LA I got introduced to a lot of bachata (Dominican Republic), banda, mariachi (both Mexico), reggaeton and salsa (Latin America), which were different but kind of cool. Most teammates generally enjoyed hip-hop, house, and alternative rock.

“The most interesting choice I’ve heard is Justin Braun’s collection of Taylor Swift hits. You’ll have to ask him about that one.”

When Michael moved to Philadelphia he linked up again with defender Sheanon Williams, someone he had played alongside at Carolina Dynamo, and he is someone at the head of the PPL Park playlist selectors.

“Usually we play a variety of hip-hop and house music but today I had the pleasure of hearing some reggae for a change courtesy of our assistant equipment manager, Dan Nolan. Guys like Chris Albright, Freddy Adu and Sheanon Williams take care of the music selection.

“I’m still contemplating the right time to drop my demo in the locker room! Maybe after a big game I’ll play a track for the guys in the near future.”

It was before Michael’s senior year at college that a two-and-a-half-week trip to Brazil would convince him that his future lay within soccer, after he witnessed the supporters’ passion at a Corinthians game. Having won the NCAA National Championship with the Demon Deacons at Wake Forest University in Winston-Salem, North Carolina, the 2009 MLS SuperDraft saw Michael become a Chivas USA player. He would represent the team 64 times in the MLS with two goals and seven assists in his three years in California. While at Chivas he also took part in an interesting video to encourage fans to attend their games (shown below)!

Another notable contribution Michael made, amongst numerous others, was to join up with the non-profit organisation ‘Schools for Salone’ to rebuild the schools in Sierra Leone decimated by the nation’s previous conflict. In May he spoke of relishing the perceived pressure that comes with being part of a trade that saw Philadelphia Union’s captain Danny Califf move in the opposite direction, and as an adaptable player, though primarily a holding midfielder, he has enjoyed the understanding with his fellow Union charges so far.

“It’s been a pretty smooth transition on the field, I’m still learning my teammates with every session and game that we play but I already feel like I’m starting to have some chemistry with a few guys on the team. Some important aspects to my game are my mobility and ability to cover a lot of ground, and my technique on the ball.

“I’m pretty versatile so when something out of the ordinary happens I feel pretty comfortable in being put in a spur of the moment decision. I try to keep it simple and just focus on doing whatever it is I have to do in that game to help my team win.”

He has so far played six times for the Union who having defeated last year’s MLS Cup winners LA Galaxy, as well as Toronto, in their last two games are 9th in the Eastern Conference, though they have played less than all but one of the division’s nine other teams. Since interim coach John Hackworth came in the team have enjoyed an upsurge in goals and certain aspects have begun to turn the Union’s way, offering renewed hope for the coming games.

“Our team has begun to gel together pretty well of late, I think we’re doing a good job of playing attractive soccer when we need to and also making sure we play for the result when we have to. Moving forward, I think we will continue to improve on our road form.”

Gaining an insight into how the English game and some of its facets are perceived in the US is something I look for and I also took the chance to tell Michael about the team I support, Sheffield Wednesday, so hopefully he’ll see more of us, and vice versa, in the future!

“I went to England to play in a summer tournament in Blackpool with D.C. United’s academy team when I was 15, we played against a few English teams like Blackpool and Everton. I am a big fan of the English Premier League, I’ve supported Manchester United since I was a boy.

“I’ll be sure to check out Sheffield Wednesday. I’m hoping they meet up with United in the Carling, FA Cup, or Premier League down the road.”