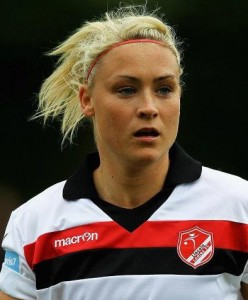 As midfield enforcer, time as captain and now Community Manager to name but three, Megan Harris has been with Lincoln Ladies since the club’s inception and she is one of the contributory factors to the unashamedly brazen soundtrack running through the team!

Leading the Lady Imps in this the second season of the FA Women’s Super League, Megan was assigned the role of the club’s digital media ambassador, bearing her Twitter username on her kit as part of the league’s drive to capitalise on social media interest and to increase the profile of the WSL.

A player from each club is doing the same, including a recent interviewee on here, Chelsea’s Claire Rafferty, and it is a similar step to that which was taken by Spanish footballing giants Valencia last year.

Megan joined Lincoln Ladies as a 10-year-old when rules and age group regulations stipulated that the girls could no longer play on the boys teams and she undoubtedly plays a pivotal role at many levels for the Imps today, which naturally extends to the music on offer!

“My iPod has a wide spectrum of music on it, I must admit there is a lot of pop and cheese, which is there to put a smile on my face and to remind me of my time at uni. ‘Mr. Brightside’ (The Killers) is my ultimate feel good tune, but generally I like more chilled out music, my most-played albums at the moment are Ed Sheeran, Adele, Emeli Sandé and Colbie Caillat.

“I can’t stand rock or ‘shouty’ music, other than that I will listen to most things dependent on the mood I’m in or what I’m doing. My Spice Girls playlist is my guilty pleasure!

“Bradders (Sophie Bradley) is generally in charge of the playlist for the iPod pre-match, we normally choose a song each so it is a bit of a variety but before we go out we always have Spice Girls ‘Stop’. The perks of being a senior member of the squad!”

The Spice Girls theme continues with Megan’s favourite ever gig or festival, although there was another influential occurrence in her ‘Girl Power’ choice it seems and it was one regarding a slightly well-known male ironically!

“My favourite ever concert I’ve been to would have to be the Spice Girls reunion, I went with a group of my best mates and was four rows from the front, with David Beckham behind me! I went to V Festival whilst I was at uni about 8 years ago which was really good fun, I had tickets to go last year but had to give them up as we had a fixture.

“I can remember when I was about 8 going into town with my Mum and getting her to buy me two cassettes – Take That’s ‘Take That & Party’ album and Kylie (Minogue)’s ‘Kylie’ album as you got a free poster with both! The first actual CD single that I bought was Puff Daddy’s ‘I’ll Be Missing You’ when I was 12.” 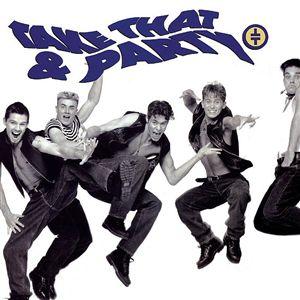 Megan’s club teammate Casey Stoney reached 100 England caps this year and the ex-Chelsea defender and player-manager exerts her wealth of experience in a different way too.

“Casey brings a little bit of garage to the table at times, taking her back to her youth, not sure what the youngsters think about it but I quite like it! We have an extremely young team so the majority of the music taste is pretty similar, upbeat chart songs are normally what gets us through our weights sessions.”

In the interviews I’ve done there have been some particularly interesting responses to the subject of singing in front of teammates, from Birmingham City’s Curtis Davies’ Barry White effort to Charlton Athletic’s Jason Euell ‘cheating’ by using the iPod to help him!

Megan could be being modest but she chooses not to list the karaoke as one of her top arenas for showcasing her skills!

“I’m like one of those people that gets brought back on The X Factor for the final show, doing the horrendous medley, so I stay well away from any karaoke. We do have some very good singers though in our ranks, Jess (Clarke) and Lucy (Staniforth) did a little song each at our presentation night last season and both were amazing.”

After studying sports science and gaining her PGCE at Loughborough University, Megan worked as a PE teacher but eventually made the bold decision to focus solely on football, and the Women’s Super League coming into play meant further changes in her day-to-day life.

“I was a PE teacher for four years but left a couple of years ago so I could dedicate my time to training and giving myself the best possible chance of being an established part of the Lincoln Ladies FC FA WSL team. I have been at Lincoln since the very beginning (formed in 1995 from a trial team) so having the opportunity to play for them at the highest level was always my ambition.

“Juggling my job in Leicester and trying to train on a full-time basis in Lincoln was never going to work so I took the plunge and left my job to concentrate on football. I didn’t want to look back in years to come and regret not giving it a go.

“Financially there is a difference but football is my passion so to be able to do something I love day in day out far outweighs the financial side of things and once I hang up my boots going back into teaching is always an option. For me the biggest change has been the amount of training – before the WSL I was training twice a week, now I try to train at least eight times a week, whether it be with the squad, in the gym or just on my own or in twos. 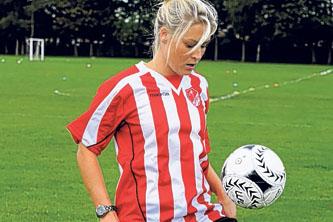 “It is pretty intense but I have really felt the benefits and I love every second of it. The buzz of the WSL has really started to get more media engaged, especially social media, and the most recent Social Ambassador role has really caught the imagination of people both locally and on a national level – it’s not every day people open the Metro to see my face staring back at them.”

In the USA the Women’s Professional Soccer league was suspended this season with a legal dispute involving a former franchise owner but Megan believes it will not hamper the female game Stateside, though England has taken lessons from what occurred.

“With the US league currently being suspended I don’t think it will be a major issue this year as the majority of the athletes will be on international camp preparing for the Olympics and I’m sure if the USA win Gold in London then the league may have a much better chance. The FA have learnt a lot from what has happened over the pond and have made sure that the English league can cover itself financially, with the idea of it gradually reaching a professional status, rather than going in all guns blazing.

“Globally women’s football is at an all-time high with last year’s World Cup being one of the most tweeted about events of all-time and with the Olympics this year I think it has really started to receive a great deal of support. In England we aren’t quite there yet with the support but we are definitely moving in the right direction, the FA WSL has been a massive step at trying to raise the profile of the female game in this country.

“With the national team doing well in major competitions it was vital that England could boast a competitive league to keep the best English players here and to help nurture the young talent. The commercial value is something that will come as the league progresses and I believe winning an Olympic medal in the summer could really ignite things.”

After beating Chelsea in the Continental Cup group stage which will see Lincoln needing a win against Liverpool to all but secure their place in the semi-finals, the team managed by Glen Harris (Megan’s father who has a very long-standing involvement with the club) have kicked off the league campaign with a draw against Birmingham City and a win at Bristol Academy.

“I think we have established a really strong squad this season, especially with the new additions of (ex-Doncaster Belles striker) Precious (Hamilton), Collie (Australian international midfielder Collette McCallum), Sarg (England Under-19 defender Meaghan Sargeant) and a few quality youngsters who will be ones to look out for in the future. As a team we have big ambitions, we want to finish higher than we did last season, top two is the dream!

“Casey (Stoney) is a vital part of our team, she is a fantastic leader who can read the game better than anyone I know and her experience and presence in the heart of defence will be massive for us. Another more attacking player to watch out for will be Stan (midfielder Lucy Staniforth also mentioned earlier), she had a really good second phase last season so I think this year she could take the league by storm, some of the things she does in training are unbelievable so she will be a key player.”

In the inaugural 2011 FA WSL season Lincoln finished 4th behind Everton, runners-up Birmingham and the nation’s dominant force Arsenal who finished champions, so bridging that gap is Megan’s immediate objective but she certainly has a few other ideas for the future.

“Outside of football I’m extremely lucky to have a great family and fantastic friends so when I get the opportunity I try and spend as much time as I can catching up with them. I have two little sisters (teenage twins Emily and Martha, also footballers for the club) and a little brother (Liam, a footballer and cricketer) so when I am not playing or training I try as best I can to go and support them.

“I have a really close bunch of friends who I went to university with, we try and meet up regularly to do different weird and wonderful things and we are all currently saving to go to Vegas for when we all turn 30 so that should be fun! My hopes for the future with football are to win a trophy with Lincoln and to get into the Champions League.

“On a personal level, after finishing playing I can’t wait to start a family, I’d quite like three kids so I think after Vegas that’s where my intentions lie!” 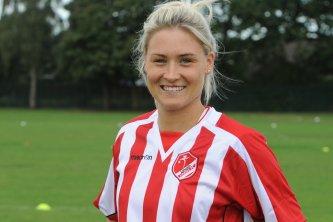