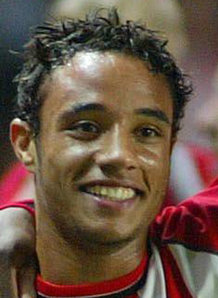 A former France Under-21 international, ex-Southampton and Crystal Palace winger Léandre Griffit has had spells in Sweden, Belgium and Major League Soccer, sampling music from numerous cultures that certainly make for an interesting alternative to his ex-Saints manager’s Edinburgh tones!

Léandre, 27, arrived in England in 2003, joining top flight Southampton from Amiens in his homeland, and coming from Maubeuge in Northern France as a teenager it was naturally a considerable change for him in Hampshire initially.

“When I arrived in England it was kind of funny because I couldn’t speak English, so I was saying ‘yes’ to everything! I loved the city of Southampton though, it was difficult to be far away from your family and I had to learn English to make sure I could understand some jokes!

“I was enjoying the mentality of English people, they were really open people and I loved that. The best memory from my time in Southampton has to be my goal against Blackburn.”

The strike he recalls came in a Monday night Premier League clash with Blackburn Rovers in October 2003 in which the Saints won 2-0 thanks to a curled effort from Léandre after striker James Beattie had netted an earlier free-kick.

In the match there were skirmishes, one of which resulted in Blackburn frontman Andy Cole receiving a red card, as well as Saints boss Gordon Strachan acting as peacemaker between his coach Dennis Rofe and fellow Edinburgh native, Rovers manager Graeme Souness.

While Strachan was the calming influence in that situation Léandre remembers a separate funny incident involving the Scot, himself and Saints’ French ex-midfielder Fabrice Fernandes.

“I was with Fabrice and Gordon for some exercises with the ball and I had to give the ball from my hand to Gordon’s feet. He was screaming something but I couldn’t understand and Fabrice told me that Gordon was saying ‘give me the ball harder’ so I started to.

“He was screaming more though and he stopped and was mad, I was confused and Fabrice was dying laughing and he told me that Gordon was saying from the beginning ‘don’t give me the fucking ball too hard!’. Me being stupid I was giving him some crazy ones!

“Gordon Strachan was a good coach, kind of crazy sometimes but he was certainly the best coach I had.”

Léandre scored again for the club in a May 2004 game at home to Sir Bobby Robson’s Newcastle United and the 3-3 draw ended the Magpies’ Champions League hopes.

Shola Ameobi gave the visitors an early lead before James Beattie restored parity and Lee Bowyer put the North East side back ahead before Titus Bramble’s own goal brought Saints level before half-time.

On 88 minutes Léandre put the ball through Shay Given’s legs to put the home side ahead for the first time but Darren Ambrose salvaged a point in injury time for Newcastle. 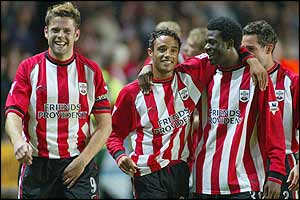 After eight appearances in total, including starts against Arsenal and Chelsea, he had loans in the Championship with Leeds United and Rotherham United before leaving England in summer 2005 for Swedish club Elfsborg.

With Southampton now promoted back to the Premier League promised land under Nigel Adkins following seven years away Léandre is happy for his former club and also their Portuguese defender who he knows from his time with Crystal Palace.

“It is superb but to be honest I’ve always knew that the club will be back in the Premier League and my friend José (Fonte) is playing for the Saints so I was so happy.”

There are also memories from his time at St. Mary’s Stadium that provided a lot more pleasure for Léandre’s senses than Gordon Strachan’s shouting!

“At Southampton we used to listen to some house music – James Beattie was the DJ! Fitz Hall used to translate some good r&b at the time for me and my best friend was Yoann Folly because he was French and was my age but I was with Leon Best, Fitz Hall and Dexter Blackstock most of the time.

“My favourite music is r&b, house and sometimes hip-hop like Kid Cudi, Pharrell, N.E.R.D. and I hate crazy rock music, I prefer pop rock! I think my first CD was Usher when I was 16 or something.

“The best taste (of teammates’ music) I will say José Fonte for his kizomba (dance originating from Angola) and house music. The worst taste would have to be my Swedish teammates – wow!

“It was some Swedish rap – I just couldn’t take that seriously.”

While with Elfsborg he won the biggest prize in Swedish football, the Allsvenskan title in 2006, also featuring in the qualifying stages of the Champions League before a loan with Norrköping.

“To play in Sweden was a good experience, I was playing with (ex-Southampton teammate and Swedish international midfielder) Anders Svensson and we won the title and played in the Europa League. Sweden is a nice country and the girls are gorgeous!”

The 2008/09 season saw Léandre return to England once more, this time with South Londoners Crystal Palace in the Championship, playing six times and working under the often controversial Neil Warnock.

“Crystal Palace was a good club with good young players, Neil Warnock is kind of weird but I liked the man!”

Upon departing Selhurst Park in 2009 he joined up with Union Royale Sportive du Centre in Belgium’s third tier where he enjoyed good form scoring seven goals and contributing four assists before a move to the USA.

He signed with Ohio-based MLS club Columbus Crew in May 2010 and scored on his debut against Houston Dynamo as well as netting in the CONCACAF Champions League against Trinidad & Tobago side Joe Public.

The former RC Lens youth then joined fellow MLS outfit Toronto FC in Canada and though now back in his homeland he enjoyed the opportunity at US soccer’s highest level.

“In the MLS I had some good moments but my first goal was the best moment, my family was there so it was special. To go everywhere like LA, New York and Chicago was fantastic.”

Rating striker Kevin Phillips as the best player he worked with as well as Victor Moses and Theo Walcott for their ability while at a young age, Léandre is now assessing his options while back home.

“I’m in France taking some time off but I’m playing for a small team, like Conference level in England, which is kind of fun. I will see in June what I do but if I decide to stop playing football as a professional I will start a business with selling houses and flats because I love this kind of job.