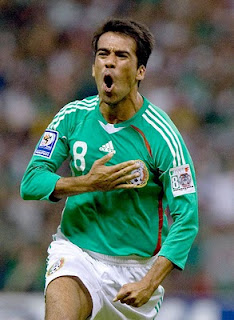 With 148 international caps for Mexico, two World Cup campaigns and a Bundesliga title included on his CV, Chicago Fire’s Pável Pardo has been in a fair amount of pre-game dressing rooms, and the sound choices of one of his current colleagues is striking a chord for the midfielder.

It has been a true mixed bag for the Fire in the early throes of this season with two wins, two draws and two defeats so far in the MLS Eastern Conference for former US international Frank Klopas’ team.

Away from the immediate business out on the field, the music dominating the airwaves in the Fire ranks features selections from two players who linked up for the team’s second goal in the 3-2 win over Toronto FC, as well as a playlist from the man who netted the consolation in the weekend’s loss to Seattle, as Pável explains.

“In my honest opinion, I like the Latin music when Marco Pappa plugs in his iPhone, or when Gonzalo (Segares) or Sebastián (Grazzini) play their music. When they put on rap I don’t really like it.”

When it comes to personal preferences for artists, Pável identifies two sides of the spectrum, with a German and Dutch DJ theme supplemented by the music of his homeland in the shape of two performers known as ‘El Potrillo’ (The Colt) and ‘El Sol de México’ (The Sun of Mexico)!

“(The first record I bought) I think it was Alejandro Fernández when I was young, a teenager.”

Pável, 35, made his breakthrough in the game with Club Atlas in his home city of Guadalajara in 1993 before a 1998 move to Estudiantes Tecos who were known then by the name Tecos UAG.

He then spent seven years with the prestigious Club América cementing his reputation as one of Mexico’s best players and winning titles during the 2002 Verano and the Clausura and Campeón de Campeones in 2005 as well as the CONCACAF Champions Cup (as it was still known then) in 2006.

Internationally he made his debut against France in a 1996 friendly, being part of the Mexico squad that won the 1999 FIFA Confederations Cup on home soil, as well as the CONCACAF Gold Cup successes in 1998 and 2003.

He featured in three of the nation’s four games at the 1998 World Cup in France as Mexico finished 2nd in Group E behind the Netherlands to progress to the last 16, though Pável received a red card in the 2-2 group stage draw with Belgium in Bordeaux.

He returned in the knockout phase game with Germany, playing the whole game as Luis Hernández gave Mexico the lead before Jürgen Klinsmann and Oliver Bierhoff won it for the Germans.

I watched this tournament on television as an 8-year-old and it was my earliest memory of Pável, and in such an international career he, as you may expect, identifies his appearances in the world’s biggest tournament as the highlights.

“Of course the international memories from when I was in the 1998 World Cup in France and the 2006 World Cup in Germany are definitely the most memorable. They were amazing games because it was the World Cup.”

In the 2006 tournament he played in all four of Mexico’s games, in Group D with Portugal, Iran and Angola and in the last 16 match with Argentina in Leipzig as they were defeated 2-1 after extra-time thanks to Maxi Rodríguez’ magnificent strike.

The player who gave the Mexicans an early lead in that game though is a current New York Red Bulls player and one of the four players Pável would select in his fantasy team of five players (the player choosing the team must include themselves by the way!).

“I would have Oswaldo Sánchez, Rafa Marquez, Xavi and Lionel Messi.” 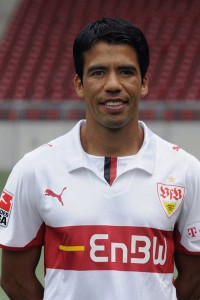 The 2006 World Cup in Germany was, as it transpired, a precursor for Pável’s move to the country permanently with VfB Stuttgart where he won the Bundesliga title in his first season, ending the club’s 15-year wait for the crown.

He also featured in the UEFA Champions League and Europa League (still known as the UEFA Cup at the time) and he looks back at his three years in Germany as a fantastic experience on and off the pitch.

“For me, it was really easy to adapt. I have a winning mentality, am disciplined, and for everything I give 100%, so it was interesting.

At the end of his time with Stuttgart in 2009 he returned to Club América, playing a further century of games domestically and this was the year in which he last played for the national team.

Pável picks out two players who he sees as the most talented Mexico has to offer at present, both of whom have plied their trade here in England’s top flight in recent years.

“Definitely two players I like are Carlos Vela, who plays in Spain (with Real Sociedad on loan from Arsenal) and Giovani dos Santos, who is playing in the Premier League (for Tottenham Hotspur). They have so much talent.”

There is another national team player who Pável has praised before and this leads on to his view on the English top division, and I wondered if at any time in his career he has come close to joining a club over here.

“Yes I like Manchester United because they have a Mexican in Chicharito (Javier Hernández), but I like the team, I like the club, and I like the philosophy of the club. Of course now Manchester City is playing well, so I follow them.

“Another team I think is interesting is Arsenal, because it’s interesting to see how Arsene Wenger does his job developing the young players. I never came close to playing in England.”

In July 2011, Pável moved north to Chicago to join his current team and he turned out 13 times last season for the Fire, scoring on his debut against the Philadelphia Union and also weighing in with five assists.

After re-signing for the 2012 season he has played in all six regular season games so far and the second most capped player in the Mexican national team’s history (second only to defender Claudio Suárez) with 11 goals assesses the progress to this point and objectives for the remainder of the year.

“It’s just about looking forward because sometimes we have difficult games and you have issues in the games, but you have to figure it out in the moment and just keep working. You keep going, keep your head up and look forward.”

Chicago Fire, the 1998 MLS Cup champions, 2003 MLS Supporters’ Shield and 1998, 2000, 2003 and 2006 Lamar Hunt US Open Cup winners are at the Home Depot Center on Friday to take on Chivas USA with their next home game coming next Wednesday against Real Salt Lake.