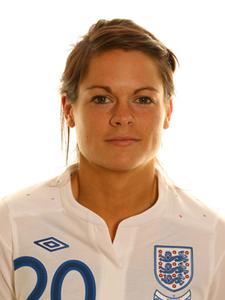 Chelsea and England international Claire Rafferty was once a young kid blasting out the sounds of three famous pop star brothers in the 90s, although she may not have expected today’s quintessential ‘guilty pleasure’ of that genre to have made its way into the team’s pre-game selection in the emphatic fashion it has!

The 23-year-old left-back and midfielder is a key part of the Chelsea Ladies team in the FA Women’s Super League which kicks off its second season next month with Chelsea opening their campaign on Monday 9th April at home to Doncaster Rovers Belles Ladies live on ESPN.

Hard work, attention to detail and keen preparation are non-negotiable for manager Matt Beard but maybe there won’t be quite so much motivation emanating from a certain aspect of the changing room music as Claire explains:

“The team has a guilty pleasure and it has become a bit of a running joke that we play Justin Bieber in the changing room and one of our players has awful music taste! Sophie Perry, she always plays soppy love songs but other than that the others generally keep it to themselves with their iPods, everyone is afraid of the iPod shuffle in case they get killed. 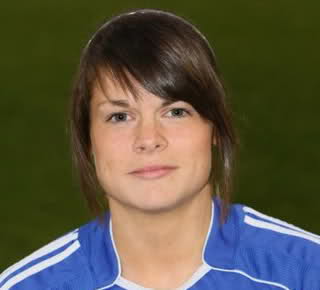 “Generally each player picks their favourite song for the playlist and they tend to be the most recent songs. With England, normally Alex Scott is in charge of the playlist and we have a mix of motivational, mainly new music.

“I like a wide variety of music, it depends on the mood I’m in, recently I have really been into Drake’s new album. However, my all-time favourite band are Kings Of Leon, I love all their albums and often put them on before a game.”

Describing heavy metal as her least preferred choice, Claire’s first record was the antithesis of that genre, a 1997 chart-topper worldwide, with the deepest and most complex meaning ever seen in a song title!

“The first single I bought was Hanson ‘MMMBop’, I played it on repeat for ages, much to the annoyance of my Mum and Dad.” 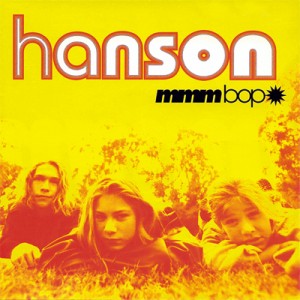 Born in Orpington, Claire started out with Kent Magpies as a youngster before joining Millwall and eventually Chelsea in 2007, making her England debut in March 2010 in a World Cup qualifying victory over Austria.

She had previously played in the FIFA Women’s Under-20 World Cup in 2008 and scored the winner against Germany in September 2010 for the Under-23 team.

Making her senior World Cup debut last summer in Leverkusen, Germany, she came on in the quarter-final against France in the 81st minute in a tie that would go all the way to penalties.

Although herself and Faye White (as well as France’s Camille Abily) were unsuccessful in the shootout there were many positives for the England team to take away in spite of the French victory.

“Personally it was a fantastic experience for me, I went into it quite naively not knowing how huge the crowds were going to be etc. It didn’t end how I would have liked but I have learned great lessons from the experience and will now be able to use them to put me in great stead for the future.”

With Claire a talented young player she can derive many of these plus points from the tournament as she says, and the team overall are working on bridging the gap to World Cup champions Japan and number-one-ranked USA.

Two of the USA’s current key players Carli Lloyd and Amy Rodriguez have spoken to the site before, as well as former US star and ‘most-capped international footballer ever’ Kristine Lilly, and the two-time world champions and three-time Olympic gold medal winners are still very much the dominant force in the women’s game.

“I think we are getting closer and closer (to the US team’s standard) each game we play, it’s all about dealing with the pressures of being expected to win and being consistent. We played the USA in a friendly before the World Cup in 2011 and actually beat them, which we took great confidence from.

“We also beat Japan in the group stages of the World Cup, we are continuously improving and with the new highly competitive domestic league, the FA WSL, we will be up there in no time.”

A familiar injury would unfortunately return last year with a torn anterior cruciate ligament, but the strong and pacy left-sided performer is in the twilight of her recovery now and focused on club and country, including the possibility of making this year’s Olympic Games in London. 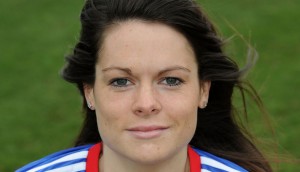 “I got injured during our game against Arsenal a few weeks after returning from the World Cup in Germany, when I went down I knew it was a serious injury. Having already done my ACL when I was 15 I knew what the comeback time was and how hard the recovery was going to be.

“I didn’t dwell on it and after having the operation I started my rehab and progressed with the help of the physios. I am now past my six-month-mark and am looking to be back playing soon.

“It is a lifelong aspiration to play in an Olympics, especially in my home country. I have to focus on getting back to good form after my injury and try and challenge and be in contention for selection.”

With that in mind Claire is eagerly anticipating the upcoming season and explains that her role differs slightly in a positional sense between domestic and international duty.

“I like to play both positions, I prefer left-back for England and left-midfield for Chelsea. I like watching Ashley Cole, I think he is a very consistent performer, also Gareth Bale has proven himself recently and is always entertaining to watch.

“We have had a great pre-season so far and we are all where we want to be physically and tactically. We are looking to take that into our first competitive game on 11th March in the FA Cup against Brighton, and the following week we have the first round of the FA WSL Continental league cup against Lincoln Ladies.

“Last season we suffered from inconsistency in the second half of the season, which has been one of our main focuses for this coming season.”

Claire studied economics at Loughborough University and graduated last year, successfully balancing club and international football with student life and all that brings.

“It was hard work managing a challenging degree such as economics and playing and training as often as we do. I would have to miss some lectures and seminars and would have to catch up in my own time which was often a struggle but overall I got used to balancing both.”

Originally wanting to be a doctor when she was young, Claire caught that irrepressible football bug as a seven-year-old in the back garden going in goal for her brother, and while many prosperous years potentially lie in wait on the pitch she is dependent on also securing a solid future away from the sport.

“My biggest hopes on the field are to have a long and successful international and domestic career – I want to win medals at both levels. Off the pitch I want to enjoy a professional career which will take me beyond football.”