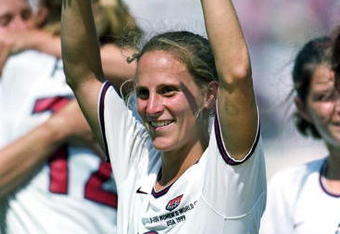 The name of Kristine Lilly will be forever associated with women’s football worldwide, indeed there isn’t an opening to this article that could do justice to all she has achieved, so let’s start with her status as the most-capped footballer ever (male or female) with 352 international caps for the USA and work from there (we’ll get on to music)!

Before her retirement at the start of this year, Kristine played in five FIFA Women’s World Cups (winning two) and three Olympic Games (winning Gold in two of these also).

Her international debut came at the age of just 16 years and 12 days against China on August 3rd 1987, while she was still at high school in Wilton, Connecticut.

The match took place in Tianjin and was only the 16th time the US national team had ever played in the women’s game.

Scoring her first international goal ten days later against the same opponents, Kristine would go on to score another 129 for her country, breaking one record after another in a glorious 24-year career.

The 1999 World Cup was also a successful one for Kristine as the US defeated China on penalties in the final in front of 90,185 at the Rose Bowl in Pasadena, California, still the largest crowd ever for a women’s sporting event.

Kristine converted the third penalty in the shootout as they won 5-4 to lift the trophy, in a game where she had also made a crucial goal-line clearance to keep the score level at 0-0.

“It was great to be part of 5 World Cups and 3 Olympic Games. I was so fortunate to have had those experiences, representing your country to be the best in the world is pretty special.”

So does the pre-match music before any of those big games spring to my mind for the former left-sided midfielder?

“I do remember during the 99 World Cup the Backstreet Boys were on a lot in the locker room and during the 2003 World Cup I loved the (Black Eyed Peas) song ‘Where Is The Love?’!

Her memory is somewhat hazy however when it comes to the first record she bought, although red vinyl does come to mind!

“I can’t remember that, shoot that was a long time ago. I do remember buying The Chipmunks’ records when I was real young and one of those records was red!” 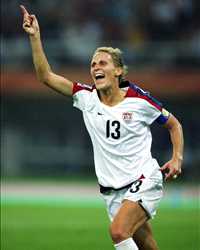 At club level Kristine represented Tyreso FF of Sweden, as well as the Washington Warthogs and Delaware Genies before the formation of the world’s first women’s professional soccer league in 2001.

The Women’s United Soccer Association however only lasted until 2003 and Kristine, who had been playing in the league for the Boston Breakers, joined her former Boston coach Pia Sundhage at KIF Orebro FF in Sweden in 2005.

The new Women’s Professional Soccer league began in 2009 and Kristine joined the Breakers, the replacement club for the by-now defunct original Boston team.

By her retirement at 39, the three-times US Soccer Female Athlete of the Year had played 102 games for Boston in a career where she suffered no major injuries.

She missed the 2008 Beijing Olympics only due to her pregnancy with daughter Sidney Marie with firefighter husband David Heavey.

On the subject of women’s football players returning to play professionally again after giving birth, how easy or difficult is it to achieve?

“Anyone can do it and Joy Fawcett was the first example of a women’s player who continued to play after having a child. She had three kids and played in three Olympics and four World Cups!

“It is possible, it’s not easy but it’s so great on so many levels!”

The feat of playing for the USA team in four different decades is astounding and this is another achievement Kristine managed, also surpassing Norway’s Heidi Stoere’s record of international caps in 1998, before adding another 200 afterwards!

Kristine has truly been a legend in women’s football and inspired and created opportunities for countless others in her time, contributing greatly to what we see today, a game which is growing all the time at women’s level.

“I’m proud that I was able to play in so many games. I had an amazing career and I was so fortunate.

“The women’s game still has ways to go but it’s growing and that’s important. As you can see after this past World Cup it’s just displayed some great soccer!”

The 2006 FIFA Women’s World Player of the Year runner-up has been running the Kristine Lilly Soccer Academy for some time now in the hope of passing on some of her fantastic experience.

“I have had my camp business for over 16 years. It’s been great for me and gives me a chance to give back to the game and teach kids.”