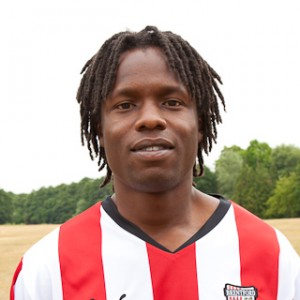 Among the music Brentford midfielder Marcus Bean likes to listen to is hip-hop, but while he appreciates the raps teammate Myles Weston writes, he doesn’t expect Bad Boy Records to be unveiling the winger as their new signing in the near future!

Marcus, 26, has featured 131 times for the Bees since a 2008 move from Blackpool and the midfield man has become an important figure for the Griffin Park side, much like his 23-year-old counterpart Weston.

While the talented winger will surely pose a threat to League One defences next season, audiences may have to miss out on hearing his music grace the airwaves.

“I room with Myles Weston and he writes and raps his own stuff. He recently wrote a rap about his holiday in Miami, it wasn’t bad but P. Diddy won’t be signing him!”

Marcus’ former QPR colleague Gareth Ainsworth, still going strong at Wycombe Wanderers at 38, has long made music singing with his band Dog Chewed The Handle, although his material is of a slightly different nature.

“Gareth Ainsworth was into his rock and heavy metal music and played in a band. He wore leather jeans, cowboy boots, the lot.

“Rock music suited his personality because he was one crazy mother******!”

Needless to say it is generally a more mellow and chilled vibe which suits Marcus, although hip-hop has also been a preference.

“My favourite music is neo soul, which is a fusion of soul, jazz, r&b and sometimes even features elements of rock music. My favourite artists are Bilal, Raheem Devaughn, Musiq Soulchild, Raphael Saadiq and Dwele, but if I had to choose one it would have to be Maxwell.

“The first CD I can remember buying was probably Luniz ‘I Got 5 On It’, a classic hip-hop track.

“I think a lot of hip-hop is now pop and too many rappers I respected have sold out. Lyrical content is no longer classed as important and tracks are made or broken on their hook and beat alone.

“Kanye for me is one of the only artists who’s prepared to push the boundaries. The greatest to ever live in my opinion is Biggie Smalls!”

An interview with Brentford’s Leon Legge was featured on this blog last month and although the defender is a lover of urban music, Marcus has noticed the odd change here and there in his music this pre-season!

“Myself and Leon have a very similar taste in music and we’re always discussing what new artists and tracks we’ve found. I’d love to give Legge some stick but 95% of his stuff is good.

“However recently I’ve been hearing a few too many trance songs! I’ve noticed a lot more house music in pre-season, I think Legge has caught the bug since his holiday this summer in Ibiza.”

On a recent pre-season trip to Norway, the squad saw US rapper Rick Ross, one of hip-hop’s premier names at present, at Heathrow Airport, but were denied a photo with him by his security.

An immensely popular choice for the pre-match music last season, the team as a result considered dropping the ‘Teflon Don’ from the dressing room playlist!

“Rick Ross was definitely the most played artist last season and a lot of the boys were upset that he pied us. We discussed not playing him but I think the first track on against Stoke was one of his!

“I think most of the boys who aren’t into urban music are into indie. They give the dressing room music stick but they end up singing along after a few weeks!”

Brentford finished 2010/11 in 11th position in League One and the Johnstone’s Paint Trophy finalists will be joined in the division next season by relegated Preston North End, Scunthorpe United and Sheffield United, the latter joining their bitter city rivals Wednesday in what will surely be an intriguing league.

“The big clubs being in the league is great because I think the league will get the exposure it deserves. However I think the big teams will struggle and there will be even more surprise packages like Bournemouth last season.”

Playing 47 times last season Marcus scored 4 goals in total but is looking to rediscover the scoring touch which saw him hit the target 9 times in the club’s League Two title-winning 2008/09 season.

Pushing for promotion is very much on the agenda for the Bees as they head into the new season under the stewardship of Uwe Rosler, this the former East German international’s first foray into English club management after spells in charge of three Norweigan clubs.

“We are a year older as a squad and know what it takes to win games in this league so I think we will be pushing for promotion. I felt I finished the season strongly and got a good level of consistency my game was lacking in the early part of the season.

“My main aim is to score more goals this season and the manager has set me a target.”

Marcus has won promotion from the third tier before, as a play-off winner with Simon Grayson’s Blackpool in 2007, so he is aware of what is needed.

Outside of football there could be a new chapter opening up for the Hammersmith-born midfielder.

“My other main interest is travelling, I love to see how other people live. I also have a few ventures in the pipeline my team are aiming to launch in the next couple of months so watch this space!”

A couple of Marcus’ favourite songs: