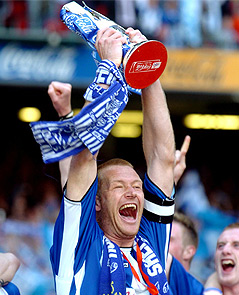 Sheffield Wednesday secured promotion to the Championship in 2005 thanks in no small part to a unique spirit amongst the team, ability in key areas and according to former captain Lee Bullen, the odd unorthodox method from manager Paul Sturrock.

Traditionally one of English football’s biggest and proudest old clubs, years of decline had Wednesday languishing in League One for the second successive season when former Dundee United and Plymouth Argyle hero Paul Sturrock took over at Hillsborough in September 2004.

It was a true season of ups and downs for The Owls with a managerial change, great Winter form, injury misfortune, loan stars and patchy end of season form, but crucially the pieces came together at the last, culminating in a memorable play-off final victory.

Signed from Scottish Cup finalists Dunfermline in the summer of 2004, 33-year-old defender (and ultimately every other position) Lee was thrust into the role of captain mid-season after the premature retirement of previous incumbent Chris Marsden.

“At the time the club had a rule that players had to live within a 15-mile radius of Sheffield,” Lee said. “It meant most lads lived close-by so we always socialised together, this created a real bond between us.

“At the end (in Lee’s final times at the club) most lads came from all over the place which meant the spirit wasn’t as strong.

“On paper maybe we weren’t the best group of players Wednesday have assembled but you would be hard pushed to find a better spirit amongst any squad to wear the Owls strip.”

That camaraderie and togetherness was evident at key points in the season, none more so than the play-off games as Wednesday dispatched Brentford over the semi-final tie before overcoming Hartlepool United 4-2 at the Millennium Stadium in the final.

“JP (Jon Paul McGovern) and Rocky (Craig Rocastle) tried to boss the stereo with dance or r&b tracks but Sturrock would hi-jack it at times with his favourite track ‘Teenage Dirtbag’! Lucs (David Lucas) was definitely an Oasis kind of guy but Peacock, Proudlock and Hecky (Paul Heckingbottom) loved the dance stuff, Gatecrasher was the place after a good result on the Saturday.”

Edinburgh-born Lee’s own musical preferences are arguably as diverse as the clubs he has been at during a career which included spells in Australia, Greece and Hong Kong, before finishing up at Falkirk, where he is now assistant manager.

“The first single I bought was probably ‘Eye Of The Tiger’, Rocky was the man! Or ‘Kids In America’ by Kim Wilde because I thought she was fit when I was a kid, work my age out from that! 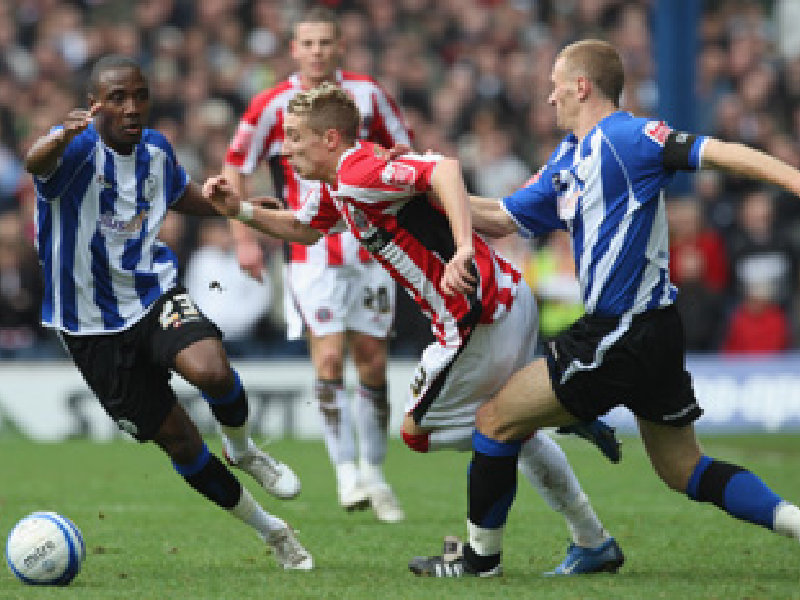 “I’ve not got a specific musical taste, I love old school dance, Andrea Bocelli, the Arctics have got to get a mention! The last concert I was at was Snow Patrol at the SECC in Glasgow and I’m trying to get Snoop Dogg tickets for later in the year.”

The 2004/05 campaign was as mentioned a rocky road, Sturrock finally managed to instill some consistency in the team when Wednesday went 10 games unbeaten from the 4-0 win at Doncaster Rovers in December to the 2-1 home defeat to Bradford City in February.

Two home wins at the beginning of March 2005 over Doncaster and Blackpool came at a price as top scorer Steve MacLean, goalkeeper David Lucas and defender Graeme Lee all suffered injuries and missed the remaining league games.

Wednesday whose place had seemed certain in the play-offs for so long were suddenly without a win in seven games and needed a win at second-placed Hull City in the penultimate fixture to ensure a top-six finish, cue some inspired management from Sturrock.

“We went to Hull needing a win to secure our play-off place. We had a team meeting and Sturrock walked in with cases of wine, beer and alcopops and told us to have a couple of drinks!

On the day of the Tigers clash, Wednesday snatched a last-gasp winner from Northern Ireland forward James Quinn to take the game 2-1 and dampen Hull’s promotion party, sending the hordes of travelling Wednesdayites into delirium.

The play-off place was secure and a home defeat to Bristol City in the last game was inconsequential, success over Brentford in the semis meant a final showdown with Hartlepool in Cardiff on a Sunday afternoon in late May.

“We went on a canoeing team-building day at Rother Valley in the week building up to Cardiff which was brilliant.”

The final itself was indicative of the topsy-turvy season for Wednesday as they scored first before trailing 2-1 heading into the final stages of the game.

Chris Westwood was sent off for Hartlepool for his foul on Drew Talbot and the man whose season looked finished Steve MacLean was off the bench to dispatch the resulting penalty to level it at 2-2.

Extra-time followed and Irish midfielder Glenn Whelan capitalised on a Michael Nelson error to fire The Owls ahead and despite the odd nervy moment for Wednesday the game edged towards its conclusion.

In the final part of extra-time 18-year-old Talbot won a header in the centre-circle and raced through on goal, rounding keeper Dimitrios Konstantopoulos and giving the Wednesday fans a moment which in one second seemed to wipe away all the hurt and despair of the previous few years.

“I was in prime position, right behind Drew as he picked the ball up on the half-way line. I was focussed on him but my peripheral vision could see a whole stadium of Owls slowly rising to their feet in anticipation of years of disappointment being laid to rest.

“Surreal would be an understatement.” 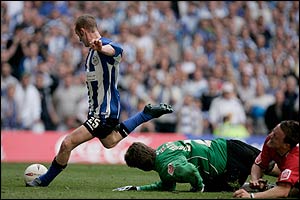 Lee spent a further three years with the club, leaving them safe a division higher than when he joined, after playing in all 11 positions for Wednesday and winning thousands upon thousands of friends along the way.

At present he is assistant manager to former Celtic, Hearts and Scotland defender Steven Pressley at Scottish First Division side Falkirk, and is also a considerable way along in his coaching qualifications.

“The UEFA Pro Licence is the final qualification a coach can get, once achieved it allows you to manage at any level in world football. So far I have met Sir Alex, Lars Lagerback, Gareth Southgate, we’ve been in UEFA HQ in Switzerland and the UEFA U-21 Championships in Denmark, I have a further 12 months until I have completed and hopefully passed it.

“Steven Pressley gets a lot of negative press in Scotland, he says it how it is and defends his club/team to the hilt. Believe me when I say this, if given the time and chances he will be a success as he is very good at what he does and the players respect him a lot.

“We have a great working relationship as he knows I am not and never will be a ‘yes’ man.”

So as captain of the team who hauled the famous Sheffield Wednesday from its knees in the third-tier, how does Lee look back on the achievement and on a day which brought such joy to Owls fans?

“In the grand scale of things, getting promoted from the third tier to the second tier of English football isn’t a great deal to most people. To Wednesdayites it was a shift in fortunes, to me, the best day of my playing career.”

A couple of Lee’s favourite songs: