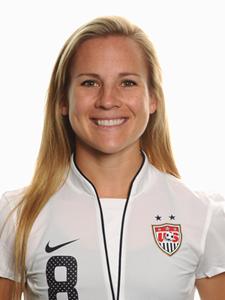 Amy Rodriguez, a key forward for the Philadelphia Independence and the USA Women’s National Team is immensely proud of her West Coast roots so maybe it is apt that fellow Californian Katy Perry ranks amongst her favourite musical artists.

Amy was one of the heroes of the gold medal-winning US team in the Beijing Olympic Games in 2008 and originally hails from Lake Forest, California.

Now plying her trade on the East Coast in Philadelphia, she strongly maintains her love for where she came from and this is noticeable in two of the musical acts she likes, one of which is the ‘California Gurl’ herself.

The homegrown theme continues further in the fact that the first record she ever bought was by a certain group who also happen to be natives of The Golden State.

“It was No Doubt with Gwen Stefani, I don’t know how old I was but I would guess around 9 or 10.”

The pacy forward, also known as ‘A-Rod’, was an important part of the national team who went on to finish as runners-up in this year’s World Cup in Germany, and her standing in the women’s game continues to rise.

Amy has 72 international caps and has hit the back of the net on 17 occasions thus far, and at just 24 she has already scaled considerable heights in her career.

She was a student at Santa Margarita Catholic High School and spent part of her senior year participating in the 2004 FIFA Under-19 Women’s World Championship in Thailand where she scored against South Korea and Australia as the US finished in third place.

During her college days at the University of Southern California, where she majored in psychology, she registered a whole host of achievements and finished as the fourth all-time leading scorer in USC’s history.

To someone like myself, from the north of England, it goes without saying that the idyllic setting of where Amy comes from seems like another world, so I wanted a small insight.

“I’ve always been a California girl,” she said. “I love the sun and the beach.”

“California is laid back and beautiful, it has been awesome to live here.”

Amy’s younger sister Lauren also plays the sport back home and is, rather unsurprisingly, known as ‘L-Rod’!

With her able to provide a unique wealth of advice to her sibling, who in turn are the players in Amy’s position who influence her the most?

In addition to the 2004 Under-19 tournament mentioned earlier, Amy also played and scored in the 2006 FIFA Under-20 Women’s World Championship, netting against DR Congo and Germany along the way to the team finishing fourth.

The possessor of natural penalty area instinct, her prolific goalscoring exploits took her all the way to the full national team and to a colossal worldwide sporting event.

At the 2008 Beijing Olympics, as a 21-year-old, she scored the second goal in the 4-0 win over New Zealand in the group stage of the women’s football tournament.

It was hugely memorable but was merely a precursor to the achievements of nine days later, now etched into the history books.

In the final against Brazil, Amy laid on the pass for midfielder Carli Lloyd (someone who of course also gave an interview for this site) to score a 96th-minute goal from the edge of the area to secure Olympic Gold for the USA.

“I’ve had a lot of successes in soccer, winning a gold medal is at the top of my list though. I have enjoyed winning national championships with my college and club teams and playing in a World Cup.”

Away from the international scene, Amy is one of Women’s Professional Soccer’s premier names and was a number one overall pick for the Boston Breakers in the draft for the first season of the division (US women’s soccer’s top level) in 2009.

For the 2010 campaign she joined Philadelphia Independence, who were an expansion team that year, and impressed with her performances, winning the division’s Player of the Month accolade for June 2010.

She scored 12 and set up 6 goals during the season as coach Paul Riley, an Englishman, won the WPS Coach of the Year award for the team’s third place finish to advance to the play-offs.

Amy’s 120th-minute goal against the Washington Freedom in the first round took them through to face her old club Boston, who they defeated 2-1 to reach the WPS Championship game.

In the final, the Independence lost out to the regular season champions FC Gold Pride by 4 goals to nil at the Pioneer Stadium in Hayward, California.

Commitments to the national team impacted on the amount of games Amy would feature in for Philadelphia during the 2011 season but she scored twice in ten regular season games as they finished second to advance once more to the play-offs.

She scored again in a 2-0 win in the semi-final against magicJack, a game where she was up against forward Abby Wambach, someone she has had great times playing alongside for the national team.

In the final with Western New York Flash, Amy netted in the 88th minute to cancel out Canada captain Christine Sinclair’s opening goal and force extra-time.

It was disappointment again though for her and the Independence as they were beaten 5-4 on penalties in Rochester, something Amy is understandably eager to avenge in the future.

“Both years we have made it to the finals and lost. My hope is that we can finally bring home the championship next year.”

This month Amy married long-term boyfriend Adam Shilling, a men’s water polo player during his and Amy’s days at USC.

The ceremony took place in San Clemente back home in California, and the new marital status of the US team’s number 8 means that one of her known favourite pastimes has now had to take a back seat!

“Now that I’m married, and my husband and I budget our money, shopping is not as high on my list! I love to cook, hike and watch movies.”