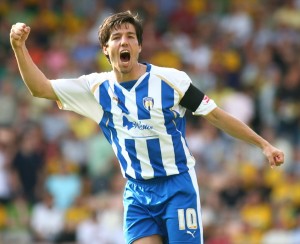 Colchester United captain Kem Izzet is about to celebrate 11 years at the club with his testimonial, so you can imagine the amount of players he has seen taking on the traditional singing initiation procedure, with young hotshot winger Michail Antonio a standout for all the wrong reasons!

Reading wideman Antonio is currently enjoying a remarkable run of form on loan with Sheffield Wednesday but he had a temporary stint with The U’s earlier on this season and his on-field precision was not matched when it came to his vocal arrangement.

“One of the ones that stands out was from a player who’s at your place at the moment, Michail Antonio,” Kem said. “He tried to do the ‘Fresh Prince of Bel Air’ theme tune but he forgot the words so it was terrible!

“He stood up there trying to give it a go but the words wouldn’t come out so I was cringing for him! Probably the most memorable one though was again another player at Sheffield Wednesday now, David Prutton.

“I can’t remember the song but he gave it a right go, he was dancing around the room and getting in everyone’s faces, it was quite serenading for me! He’s certainly not shy in coming forward and he was one of the only ones I haven’t had to cringe at.

“Luckily when I signed in 2001 it wasn’t a tradition for new players to sing so I haven’t had to do it but it was introduced after and there’s been a few bad ones since!”

Current music emanating from inside the League One U’s ranks tends to have Kem wishing a certain veteran ex-goalkeeper would come out of retirement, if only for his tune choice!

“There’s a lot of dodgy ones but Kayode Odejayi is really up-to-date with his music and he usually controls the stereo, with a lot of r&b and dance. John-Joe O’Toole is a bit of a rocker and likes a lot of the old stuff like The Beatles, he likes Kasabian as well, which I don’t mind, but he loves them.

“I can’t say I’m a massive r&b fan so when that’s on in the changing room I prefer to go and sit in the physio room! I’m not a massive one for getting inspiration from songs before games, I prefer to sit in silence and get my thoughts together before I run out to play.

“Our keeper Aidan Davison, who’s in America now (head coach of Jacksonville-based team FC JAX Destroyers), when he was here used to play ‘Ring Of Fire’ a lot, who sings that? (After prompting!) Johnny Cash that’s it, he was a big Johnny Cash fan and as one of the older pros he was in charge of the music at the time.”

Kem’s older brother is ex-Leicester City, Birmingham and Turkey international midfielder Muzzy Izzet who counts a very well-known Leicester band as one of his associates.

“He likes his music and he’s more open with it than I am, I know he likes Kasabian and he’s friends with them, obviously with them being from Leicester. I know he loves Eminem too.”

Kem, 31, has surpassed 400 appearances for Colchester since signing from Charlton Athletic, cementing his place in the club’s record books, and his testimonial on Saturday May 12th will feature a fair bit more than the usual.

Taking place at the club’s Weston Homes Community Stadium, the U’s promotion-winning teams of 1992 and 1998 will play each other, followed by a side comprising of celebrities from inside and outside of football (including Tottenham striker Jermain Defoe) and players from the 2006 League One runners-up team (led by that side’s manager at the time Phil Parkinson) taking on the present day line-up.

“There’ll be some more ex-players to go with the 2006 team, my brother (Muzzy Izzet), Fabian Wilnis who was at Ipswich, Darren Huckerby, I’ve got Kirk Norcross from The Only Way Is Essex coming down too. I’m just trying to add something and create an extra buzz so it appeals as well to people who may not be Colchester fans and thankfully I’ve got a few friends in football.

“It’s been hard work to organise and there’s still quite a bit to do but in the next week to ten days the bulk of it should be done. It’s been a bit of a pain in the backside trying to get players from other clubs or ones who’ve got other commitments but I’m looking forward to it.”

Also confirmed since myself and Kem spoke is ex-England striker Teddy Sheringham who played alongside him for the club in the Championship in the 2007/08 season.

London-born Kem has played for eight different managers (including caretakers) in his time with the Essex side and stated once that he believed the move from Layer Road into the new aforementioned stadium in 2008 was the biggest achievement during his stay.

Although Layer Road was understandably much-loved by the supporters given its history, the current situation and further plans in place offer a considerable amount of benefits for the club moving forward as Kem explains. 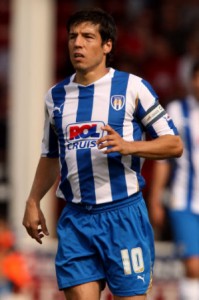 “When we get the new training ground in the summer the extra facilities will be key. At the moment we go to the stadium to get changed and then train at the army barracks, now that’s all well and good but if you want to do any extra work or go any further it’s a bit of a problem.

“We’ve got a lot of youth coming through at the club and I think over the next five years we’ll see the benefits of these facilities and with players like myself and Karl Duguid hopefully we can pass on some of the experience and knowledge to help them.”

Kem has played 38 times this season and he rues the amount of draws the team has accumulated, citing that as a huge factor to be addressed in the right way when the 2012/13 campaign comes around in August.

“We haven’t lost many at home but we’ve drawn too many, I think we’ve drawn 20 games so from that you can probably afford to lose five games. We need to turn five or six of them into wins and keep most of the squad together for next year, I think a neutral perhaps wouldn’t know too many of our players but we ourselves know what we’ve got and we’ve slightly underachieved considering.

“Personally I think my form has been better in the later part of the season, I’ve had a spell out of the team but when I’ve played I’ve enjoyed it.”

As a tenacious competitor who has seen many opponents in the middle of the park in the last decade or so I was interested to hear who Kem found the toughest to play against this season.

“I think Charlton were the best team we came up against, when we played them at home they were far superior on the day and got a well-deserved 2-0 win, but then we went to theirs and turned them over by the same scoreline. Their two in the middle (Danny Hollands and Dale Stephens) were the best pairing.

“Physically I think your boys (Sheffield Wednesday) have certainly got something and would be up there too, with (Chris) Lines and (Jose) Semedo in there, not only that though they’ve got good quality and can play. I think the top six teams in the division this year have been the strongest for some time and with the teams coming down and the likes of Swindon coming up it’s going to be much the same next year.”

With his testimonial approaching, a day to celebrate his time with the club and  for the fans to see some old faces, it seems more apt than ever to conclude this interview with Kem’s choice of a fantasy 5-a-side team made up of the best players he has ever worked with.

“For the goalkeeper I’d have to say Dean Kiely who I was with at Charlton, he was very good, and a defender, I’d probably go for Wayne Brown (ex-Colchester centre-back). In midfield Claus Jensen, at Charlton Mark Kinsella was brilliant but when he was coming to the end Jensen came in and was every bit as good and he’d definitely get in my team.

“For a striker it’d have to be Jamie Cureton – he’s the best finisher I’ve seen that I’ve played with, he only needed half a chance and it’d be in the back of the net. He was on fire the season we got promoted (2005/06) and then in the Championship the season after which got him his move to Norwich, so I’d go for him.” 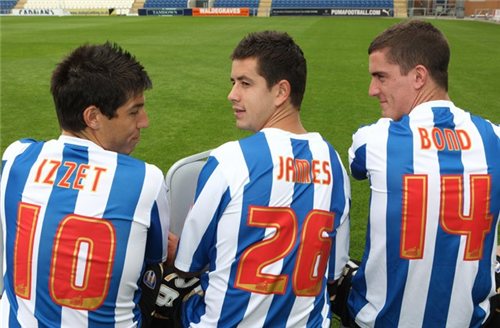