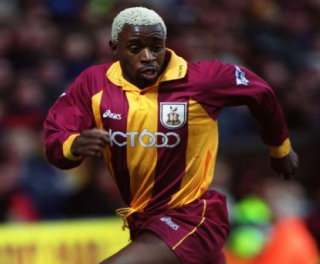 Ex-Jamaica international and Premier League performer Jamie Lawrence’s trademark work ethic continues to serve him well, and while providing coaching and mentoring through his academy the one-time Bradford City team DJ can also still be found patrolling the midfield when matchday arrives.

South Londoner Jamie’s intriguing rise was charted in his book, and having received his break in the professional game with Sunderland in 1993 under ex-England captain Terry Butcher he would stop off at Doncaster Rovers, which ultimately transpired to be the stepping stone to his exploits in England’s top division.

While with his next club Leicester City he would gain his first feel of the Premier League and eventually work with Martin O’Neill, winning the League Cup before joining the club he is most strongly associated with – Bradford City.

Initially under the management of ex-Bantams player and now a long-time mainstay of Sky Sports, Chris Kamara, Jamie would enjoy an unforgettable journey as part of Paul Jewell’s team who gained promotion to the big time and survived relegation against all the odds in 2000.

Scoring 14 times in 172 games in all competitions for the Valley Parade side from 1997 to 2003, he would also be the man most likely when it came to the changing room music in the run-up to kick-off.

“Yeah at Bradford I did it – I played a bit of reggae, but mainly old school garage which everyone really liked.” 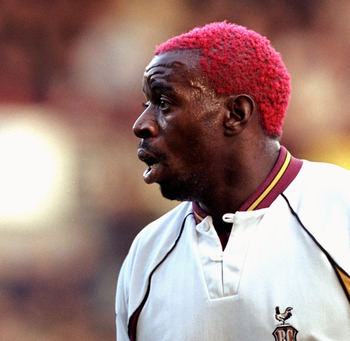 In terms of teammates’ dodgy music tastes, it would seem that the player in question had as good a quality of song choice as he did balance on top of cars, in Jamie’s opinion of course!

“Macca, Stuart McCall – he was into rock, that’s not for me! I don’t like rock or punk and I’m not a great lover of pop music either.

“I like reggae – Jah Cure, Bob Marley for obvious reasons, I was brought up on that by my Mum and Dad and still love it, also Beres Hammond. I like a bit of hip-hop as well, old school hip-hop, (The Notorious) B.I.G., 2Pac, Nas.”

The first record he bought was an r&b offering from 1985 by female singer Cherrelle alongside Alexander O’Neal, and he even gave me a laid-back rendition of it…

When we were talking about his Bradford teammates’ musical preferences, after the mention of Stuart McCall I asked if there were any others with questionable tune choices, with the first name that came into my head being Dean Windass, for whatever reason!

“No he came in late so he was down the pecking order with it anyway and never got the chance!”

With UK garage building in popularity before hitting a peak around the turn of the millennium the place to be at the time was the Cypriot resort of Ayia Napa, with the scene’s top DJs and acts as well as an eager following of party-goers coming together to make it a great time in the recent history of UK music.

The genre has been mentioned on here a few times by various players who list it as one of their favourites, including the likes of Aston Villa legend Ian Taylor and ex-Chelsea defender Michael Duberry, and Jamie is another who was involved at the time.

He is also familiar with one of the personalities most synonymous with that era, a DJ who was a key protagonist in the rise of UKG and a name the aforementioned Taylor and Duberry also talked about in their interviews.

“Yeah I was out there and Spoony’s a friend of mine too. There are no stories I can tell you that you can really put on to paper though!”

The initiation procedure of new players singing in front of the team however was something that did not come into play for Jamie, which he was quite glad to have missed out on!

“It’s become quite a popular thing since but none of us at the time had to do it. I can’t sing so that’s why I’m a footballer!”

During his time at Bradford he gained the opportunity to represent the nation of his parents when Jamaica gave him his debut in 2001, and he concurs with ex-defender Michael Johnson’s assertion regarding the enjoyment factor that comes with playing for The Reggae Boyz.

“The atmosphere was second to none – it was party time. When I got there I didn’t only stay with the English players I mixed with them all, for example I’m still good mates with Ricardo Fuller.

“I enjoyed every single moment with Jamaica.”

His goal in a 2002 World Cup qualifying game with the USA in Foxborough, Massachusetts, ranks highly in his list of his favourite career strikes, as does the one I mentioned to him, his second goal on the day for Bradford away to West Ham United in a 5-4 defeat in February 2000.

Having followed up and bundled Gunnar Halle’s parried shot into the net, Jamie’s second of the game saw him gain possession on the right before bamboozling Igor Stimac and sending a superb curling left-foot effort over Hammers keeper Stephen Bywater from outside the area.

“The one at Upton Park – one, because it was a goal in London for me and two, because all my mates were there. One at home against Norwich from near the halfway-line in a game we won 4-1.

“A diving header for Leicester, and a goal for Doncaster which was a volley. My goal for Jamaica as well, for sentimental reasons with my Mum there.”

Prior to joining Bradford, Jamie’s spell at Leicester saw the Foxes win the Coca-Cola Cup (League Cup) in 1997, with a 1-1 draw with Middlesbrough after extra-time at Wembley meaning that there would be a replay at Hillsborough.

Steve Claridge’s 100th-minute goal won the game and Jamie explains the circumstances leading up to his appearance as a substitute in the replay in Sheffield, having missed the Wembley game.

“For the first one I’d played every game leading up to it and I was left out of the whole 16, so I was devastated to say the least. In between that game and the replay we played Arsenal and he (Martin O’Neill) played the fringe players and I played well to get a place in the team for the replay.

“Coming on at Hillsborough and us winning it, with my background and where I’ve come from, was special.”

Having won promotion to the Premier League with Bradford in 1999, the team were largely written off with Sky Sports pundit Rodney Marsh even promising to shave his head if they stayed in the division at the end of the season – they did, and he did.

Manager Paul Jewell left the club after surviving relegation, dropping a division and taking over at relegated Sheffield Wednesday, and under Chris Hutchings and then Jim Jefferies they could not repeat the achievement and went down to Division One in 2001.

Jamie would stay with the club until 2003 and one of the light-hearted characteristics of his time in the top flight was his range of different coloured hairstyles, something I remember vividly from watching Match of the Day as a kid. 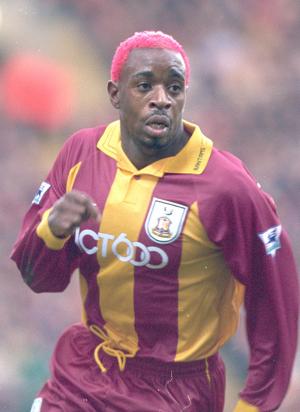 He has been running his own football academy in the last few years, based at Nightingale School in Tooting, using the sport to help the prospects of youngsters from London and now even further afield.

The academy provides guidance for the 11-16-year-olds in all areas of their life and has also helped the likes of Cheltenham Town winger Jermaine McGlashan and Stevenage’s Robin Shroot on their way in the game.

A number of professional players have come down to help out, and Jamie, who had a spell managing Ashford Town, derives influence from his past managers in his coaching.

“I do one at Wandsworth early in the morning, as well as at Nightingale School where I’m a mentor. It’s giving the kids a bit of focus and the school works at helping them to try to get involved in areas like music as well – anything that keeps the kids off the streets is a positive.

“Clinton (Morrison) comes down, Marvin Elliott, Robin Shroot, I think Cameron Jerome might be, Darren Byfield. We’ve had nine players go on to league clubs and Bradford had one on trial, Christian Nanetti (ex-Queens Park Rangers), he’s playing Conference South and I expect him to play pro this season.

“I’ve tried to learn all the best bits from the managers I had, you’d be a fool not to learn from people like Martin O’Neill and Paul Jewell. Even if you thought some managers were bad you can still learn from them.”

Jamie’s striking past hairstyles mentioned earlier regularly get brought up by the kids at the academy too, as you would probably expect!

“They all mention it, anyone who comes in goes home and then comes back the next day and will say ‘what was going on with your head at the time?’!  Do you know what though? Life’s too short so I just added a bit of fun to it, if I weren’t playing well I would’ve been in trouble for it!” 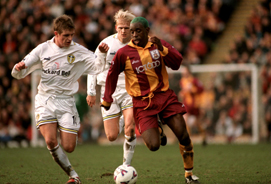 After leaving Bradford he spent time with Walsall, Wigan Athletic and Grimsby Town before a season with Martin Allen’s Brentford in 2004/05, later representing non-league sides such as Harrow Borough and Margate.

Last season he played around 40 games for Surrey-based Cobham and even at 42 he still relishes playing and has no intention of stopping just yet.

“I want to keep playing, I can still run, football’s in my blood and I still love pulling on my boots come Saturday.”

It’s a regular question on this site so who would Jamie choose in a 5-a-side team made up of the best players he has ever worked with?