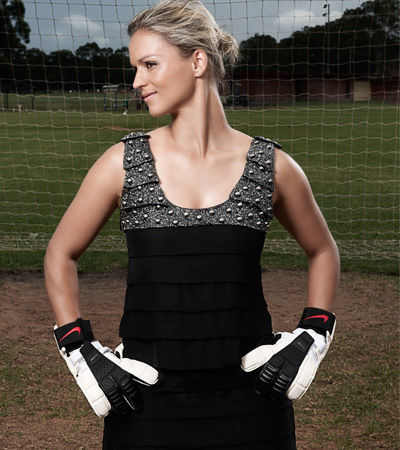 With the honour of captaining the Australian national team has come numerous responsibilities for goalkeeper Melissa Barbieri, although her senior role when it comes to the pre-game playlist is perhaps less of an official position for the mother-to-be!
The one-time Melbourne Victory stopper has represented the Westfield Matildas at three World Cup competitions and lifted the Asian Cup as skipper in 2010 after a penalty shootout victory over North Korea in Chengdu, China. ‘Bubs’ is undoubtedly one of the most prominent figures in the women’s game in Australia and an instantly recognisable face to all who follow the sport in the country. The Matildas’ head coach of the past eight years, the Scotsman Tom Sermanni, has been a simply huge influence on Australian women’s football in a wider sense and he has recently taken over the same position with the US women’s national team. His departure has led to the appointment of Hesterine de Reus, herself a former Dutch international with extensive and varied coaching experience over almost two decades. During Sermanni’s distinguished stint in charge, music would play a definite role in the Matildas’ pre-match routine and Melissa was among the principle influences. Although the team’s impressive array of young footballing talent have also made their presence felt with the sound system in more recent times Melissa and her more senior counterparts still have an active part to play.
“Well our last coach has never cared what happens in the change room as long as we can hear him when he speaks, so we just turn it off then. We always have someone bring stereo speakers to attach to iPods, this is usually someone who can be relied on and usually not a younger player who needs to be focusing on their game. 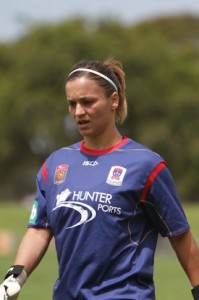 “I have been the DJ for the last few years as I was the most motivated to collect all players’ wishes for pre-game music. Now the young ‘uns have taken over but us older players make sure there are a few selections we can sing to at least.’’
Melissa, who is also Game Development Education Officer for Football Federation Australia amongst her off-field duties, described the way she gets into her desired mindset when match day arrives and it is a method that has yet to be mentioned in the interviews on here, until now!
“To get pumped up before games I listen to soundtracks of dance movies that I can imagine a scene to where the dancers are doing something awesome or amazing.’’
Although her family background is Italian, Melissa was not a heavy listener of music originating from the nation when she was growing up, but you can find Italian performers in amongst her collection nowadays.
“I didn’t have Italian albums or anything, just my father singing when he would get together with friends and play cards. Eros Ramazzotti and Andrea Bocelli are my favourite Italian musicians today.
“My favourite bands and music really are the more acoustic bands or music genres – Mumford & Sons, Newton Faulkner etc.’’
One of New Jersey’s most famous musical exports are the band that Melissa names when she recalls the first record she ever bought, and the 1986 album features the song that most would still probably name today as the band’s most memorable amongst all their work – ‘Livin’ On A Prayer’.
“Bon Jovi – ‘Slippery When Wet’… I have no idea how old I was.’’ 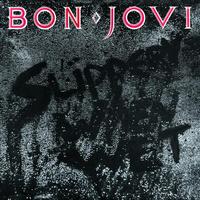 Although certain tracks from that album are perfect for karaoke it is not the one that the Matildas choose to sing along to when they are together. That particular honour tends to be taken by a singer who has been known for many decades Down Under… even if he was actually born in England!
“We don’t have a ritual of single singing for debut or anything – our men’s team does that but not us. We usually start singing good old Johnny Farnham or another Aussie band together.’’
The value of music in bringing players together is something I have tried to explore throughout the time I have been doing this site and when asked about live performances she has seen Melissa emphasised how her own experiences of this have actually originated when on international duty rather than in an audience at a gig.
“All my music memories come from playing in various Olympics and World Cups. Having a song that comes on in the change room that gets everyone singing is a great way to bond before a game – but really hard to find a song everyone will sing to.’’
One of Melissa’s countrymen, Socceroos winger Richard Garcia, told this site in 2011 how certain songs can take him back to the time the Australian team spent together while at the 2010 World Cup in South Africa. The reason for this stated by the ex-Hull City man and current Melbourne Heart standout was his teammate and Reading goalkeeper Adam Federici’s tune choices. Melissa also believes in music evoking strong memories in this way and she shared with me the songs from the Matildas’ 2011 World Cup playlist in Germany.

When talk moved on to the more intriguing sound choices of those Melissa has worked with in her career so far it was a member of staff, a respected international midfielder, and a teenage keeper for the Matildas who were the three who instantly came to mind.
“Funnily enough our Doc had the most interesting taste in music – very proper and very straight down the line. We were shocked when we found out that he liked Eminem!
“We have a lot of players that can play the guitar and sing – Joey Peters would serenade us sometimes and put on a cracking acoustic show. These days Brianna Davey, a fellow goalkeeper, can string a tune or two together, which makes for good down-time and laughter.’’
There are not many individuals who can claim to have done quite so much for women’s football in Australia in recent years as Melissa has but there is another rather important responsibility that will be arriving in the very near future. Bubs is expecting her first child and she even played three international matches before she found out she was pregnant! Midfielder and fellow Matildas performer Heather Garriock gave birth to her daughter Kaizen late last year and the subject of women’s players having children during their career was something I discussed with legendary former US international Kristine Lilly in the early days of this site in 2011. Melissa, who has also represented the Newcastle Jets in the W-League, describes how she is getting on and also how her career will fit into the equation once the baby is here.
“I feel great, which is probably upsetting my doctors as I am not resting enough, but I have had to settle down with only four weeks to go. (I have) no plans for club football other than getting back to my amateur club Box Hill in the Victorian Premier League in Victoria.
“No clubs have asked for post-pregnancy signings yet so I will wait and see where my professional career heads post-birth.’’
Anyone who has listened to Melissa speak about women’s football will know the strength of feeling and sincerity that she conveys each time she discusses the sport. She has detailed the obstacles she has faced like many others and also the struggles she has encountered in her past attempts to make it more accessible and widely promoted. As someone who has first-hand experience of the game in Denmark, Melissa has spoken of how despite the short season that the Westfield W-League has (October to January) she believes that the quality of football is up there with the very best in the world. Women’s football has been through incredible stages of progress in the past 10-15 years especially and the interest in the sport has been in evidence with the millions upon millions that have watched such spectacles as the 2011 World Cup in individual nations around the globe. Speaking from the viewpoint of an English spectator I believe the 2012 London Olympics were a further step forward for the female game and Melissa outlines her thoughts on the progress that continues to be made in Australia. 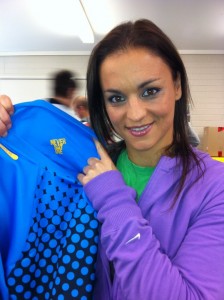 “We have come a long way after the appointment of our last coach Tommy Sermanni who basically made the game what it is today in this country. Giving us a semi-professional league that runs over the summer and has some of the best international players coming to play for that football holiday feel has been really great.
“We have a small season at the moment but hopefully we can get a full home and away season soon. Our talent has grown tenfold because of this league – giving players a taste of what it is like to play at a high level raises the bar for everyone.
“It also gives players a reason to continue to play even if they can’t make the national team.
Of course there needs to be a lot done to make sure we can be paid better and have all players paid in the league.
“Sponsors etc. are required for these things though. Most costs are operational and take up a lot of the funding before the players get paid.’’
After taking over from the magnificent Cheryl Salisbury, Melissa has led the national team as captain in superb and exemplary fashion in addition to her off-field responsibilities which include her work as a First Aid Officer. Although she only turns 33 this month she has gone on record previously as wanting to coach the Matildas at a World Cup in the future, with all the talent coming through the national team ranks. In the concluding question that has become customary on here Melissa chose the best four outfield players she has worked with in her career so far. These are the players that Melissa named when I asked her to place herself in a 5-a-side line-up with four others out there in front of her, and there are two Australians, one from Wales and one from the US!
“Megan Rapinoe (midfield) – because she has great vision and flair. Jessica Fishlock (midfield) – because of her ability to read the game and (her) technical ability.
“Collette McCallum (midfield) – best left foot in the world. Di Alagich – strong defender, puts her body on the line.’’