One of Sweden’s greatest ever female footballers, Pia Sundhage is two years into her mission to lead her nation’s women’s team to the very top, and the 2012 FIFA Women’s Coach of the Year has many a melody to help guide the way.

Named as Greg Ryan’s replacement following the third-place finish at the 2007 FIFA World Cup, Pia had five unforgettable years in charge of the U.S. Women’s National Team. During that time, she got to know the players as individuals, and within her instructions she entrusted them with the freedom to be positive and expressive.

The most notable rewards came in the shape of Olympic gold medals in 2008 and 2012, as well as a runners-up placing at the 2011 World Cup. The former goalscorer left her role in the States in September 2012 with her head held high and a place in the hearts of players and fans alike, as she took on the job of leading her native Sweden.

As hosts of Euro 2013, the Swedes reached the semi-final before being defeated 1-0 by winners Germany in Gothenburg. Pia is now on the cusp of securing a place at next year’s World Cup in Canada, with Sweden top of their qualifying group with two games remaining.

Golden Boot winner at the European Championship with five goals, Olympique Lyonnais forward Lotta Schelin continues to be an integral part of Pia’s Swedish line-up. The 30-year-old co-captain holds status as one of the most revered attacking players in the game and as her teammates Nilla Fischer and Sara Thunebro have revealed on this site, she marvels with her singing voice too.

The basis of this site is how music and football manage to mesh in such numerous ways and although every interviewee is asked to explore the two topics, now and then there will be an individual who represents the link perfectly. Pia is exactly that, frequently bringing music into her coaching and sharing her love of performing, be it via an acoustic set or just an impromptu rendition of one of her best-loved songs.

When asked which of the players from those she has coached she would choose to record a cover version of a track with, she went for one of her aforementioned senior figures.

“I would choose ‘Bridge Over Troubled Water’ by Simon and Garfunkel, with Lotta Schelin.”

With a career that saw her score 71 goals in 146 international appearances, Pia made the first steps into coaching as player-manager of Hammarby IF DFF in 1992. In the third and final season of America’s first professional women’s league (2003), the Women’s United Soccer Association, she was named the division’s Coach of the Year while in charge of the Boston Breakers.

Spells with Kolbotn in Norway and KIF Örebro DFF back home followed, before she assisted former teammate and Sweden defender Marika Domanski-Lyfors for China in the 2007 World Cup. Her biggest job then presented itself later that year as she was appointed Head Coach of the U.S. Women’s National Team.

Despite the huge successes, it would be wrong to suggest that it was five years of plain sailing, but Pia brought fun and happiness and it certainly rubbed off on the players. Music offers an outlet for her to express herself and just as it provides a soundtrack to life it also helped to colourise her tenure with the U.S. team.

Many significant moments were marked with songs and they include the time she introduced herself to her players by borrowing from a true musical icon. She recalls this and other tunes that still manage to take her back.

“My first words to the team – ’The Times They Are A-Changin’’ by Bob Dylan. When I got the FIFA award for best coach (2012 FIFA Women’s Coach of the Year) – ‘If Not For You’ (Bob Dylan).
“’Slow down, you move too fast’ (‘The 59th Street Bridge Song (Feelin’ Groovy)’) by Simon and Garfunkel, which I sang in the press conference before the World Cup final.”

The World Cup-winning team of 1999 opened countless doors for women’s soccer in the U.S. but there are many on the National Team today who owe much of their high profile to Pia’s guidance and belief. Forwards Alex Morgan and Sydney Leroux, as well as midfielder Tobin Heath, are examples, and so too is Carli Lloyd, who had faith invested in her by Pia.

Lloyd scored the winning goal in the 2008 Beijing Olympics against Brazil and netted both in the 2-1 final win over Japan four years later in London. In between those two gold medals was the 2011 World Cup in Germany, a tournament in which the U.S. players won masses of new fans en route to a shootout defeat to Japan in the final.

That World Cup featured Pia’s most cherished moment in the sport as striker Abby Wambach, the all-time leading scorer in international soccer, equalised well into stoppage time at the end of extra time in the quarter-final with Brazil. The Americans went on to win on penalties to reach the final four and Wambach was one leading the tributes when Pia said her goodbyes in 2012.

With three Algarve Cups and two Four Nations Tournaments to add to her silverware haul for the U.S., Pia enjoyed 91 wins, ten draws and only six losses in her 107 matches. Following the success at London 2012, the team embarked on the Fan Tribute Tour, taking on a series of nations on U.S. soil.

The tour included a double-header with Australia and the first of these was Pia’s penultimate game at the helm. On the field after the 2-1 win at The Home Depot Center in Carson, California, the team presented her with a Taylor guitar signed in gold by each player.

Pia proceeded to sing a snippet of Elvis Presley’s ‘Jailhouse Rock’ but who does she list as her favourites when it comes to artists?

“My big brother taught me to play the guitar. I started with Bob Dylan and continued with Simon and Garfunkel.”

Taking influence from a brother nine years her senior, Pia went on to buy her first record and it was from a Swedish progg band featuring the aforementioned singer Mikael Wiehe.

There was much to honour when Pia’s time with the U.S. drew to a close and her very last game was the 6-2 victory over Australia at Dick’s Sporting Goods Park in Commerce City, Colorado. Besides fittingly delivering a win, the team also sang ‘You Are My Sunshine’ to her and the montage of her reign shown on the big screen moved Pia to tears, before she managed a quick version of Tina Turner ‘The Best’ for her players.

Pia was just 15 when she made her debut for Sweden and she was a huge reason behind their triumph at the 1984 European Championship, which so far remains their only major title. The ex-Lazio player, who won four Damallsvenskan crowns with Jitex BK, scored in the first leg of the ’84 final against England before converting in the shootout of the second game to win the trophy.

Like so many of today’s female players and coaches, Pia started out as a player on the boys’ team, although there was even greater resistance for her to overcome. She very much embodies how far the women’s game has come and after her success as a player and coach, she returned to Sweden to lead the national side as a popular choice. 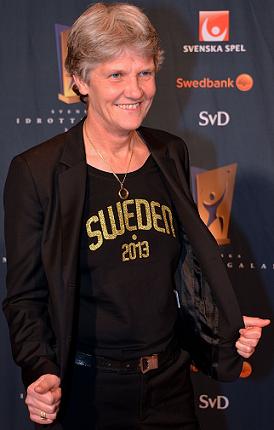 Replacing Thomas Dennerby, she recognised the need to find the approach that works for the Swedish players rather than simply applying the exact style she used in the U.S. She has however brought that same positive, confidence-breeding mentality and she is a coach who preaches that it is fine to make mistakes as a player through trying to do well for the team.

Sweden achieved third place in the last World Cup and their chances of making it to Canada 2015 look promising. Two games of the qualifying campaign remain, and three points clear of Scotland, they face that very opposition as well as Bosnia-Herzegovina in a home double-header this month to conclude.

In typical Pia fashion, she expressed her happiness at the present moment as she tries to take her country forward.

“It is great to be back home, coaching your country, not only as a coach but also an ambassador for the women’s soccer here in Sweden. The biggest challenge is to work with the clubs and work hard with joy to become the best in the world.”

Even with the most talented young players to pick from, it is massively helpful to have experienced figures around. In amongst the likes of Therese Sjögran, Caroline Seger and Lotta Schelin, Pia has some players making their way up.

One of those is a midfielder/forward whose singing ability has been mentioned on here previously by striker Christen Press, midfielders Erika Tymrak and Yael Averbuch, and also defender Nilla Fischer. Pia picks her out as a musically-gifted member of her current crop, alongside her number eight.

Football can be as complicated as you make it but for all the knowledge, experience and understanding Pia brings, she knows how to make it wonderfully simple. There is an element of ‘lagom’, the Swedish approach of moderation and balance, in her response to the question of what advice she would give herself if she could go back to when she was starting out as a player or coach.

“Continue to be yourself and enjoy! Try to make your coach better by giving her or him positive feedback.”

Whether in football or life, Pia is a great believer in fun and she keeps it as uncomplicated as can be when asked about any future plans or targets she has outside of the game.

Pia may well be using the words of Simon and Garfunkel once again as Sweden go for the ultimate glory at next year’s World Cup: “Your time has come to shine. All your dreams are on their way.”

For now, let’s remember what Pia achieved as a player, as she names the best she ever worked alongside. These are the four she would choose alongside her in a 5-a-side line-up and next to the Swedish names is a former Italian striker who went on to coach Canada.

“Goalkeeper – Elisabeth Leidinge. The best goalkeeper at that time; flexible and good in the air.
“Defender – Kristin Bengtsson. Modern left-back; fast, with a great left foot and attacking style.
“Midfielder – Görel Sintorn. She could dictate the tempo.
“Striker – Carolina Morace. A goalscorer, turning with the ball, technical and took a shot. Unpredictable.”