With well over 100 international caps as well as appearances at multiple major tournaments, Sweden left-back Sara Thunebro has featured alongside many notable performers, and she is only too happy to hand the limelight over.

Although her international debut would have to wait until she was 24, the current Eskilstuna United DFF defender has played in two World Cups, two European Championships and two Olympic Games. Since that introduction to the Swedish national team against the U.S. back in January 2004, Sara has become one of the regular fixtures in the side and despite her initial intention to retire from internationals after Euro 2013 she remains in Head Coach Pia Sundhage’s plans today.

Her club career has been split between Germany and back home, with a runners-up medal from the UEFA Women’s Cup (with Djurgårdens IF) and also the UEFA Champions League (with 1. FFC Frankfurt) after the competition was rebranded. Now providing her extensive experience and attributes to help Eskilstuna challenge the upper reaches of Sweden’s top flight, the Damallsvenskan, she has many career teammates to cast her thoughts over.

As music was discussed, the regular question of which of those she has played alongside she would record a cover version of a song with was brought up. This can be a duet with a one-time teammate or a group effort and Sara certainly took the latter option and ran with it!

Sara’s choice illustrates just how many of her colleagues have made a big impact on her, or at least her strong desire not to upset anyone by leaving them out! The last name on that list, Olympique Lyonnais and Sweden’s Lotta Schelin, is of course one of the leading attacking talents in women’s football. Recently joining her in the Division 1 Féminine in France was another national team standout, midfielder Caroline Seger, who has signed for Paris Saint-Germain.

The esteemed and accomplished duo were on Sara’s mind as she named the most gifted she has ever had the pleasure of working with, although it wasn’t football ability she was talking about on this occasion.

“I have to choose two of my teammates, both of them are really good singers! Lotta Schelin and Caroline Seger.”

Although they are regulars in the latter stages of tournaments, Sweden’s solitary major title to date is their Euro 1984 crown. Third place was achieved at the 2011 FIFA World Cup under Thomas Dennerby and ex-U.S. Head Coach Pia Sundhage led them to the semi-final of last summer’s European Championship on home soil.

Sweden are currently preparing for a friendly away to England this Sunday (August 3rd) and the outlook is good on the qualifying front for next year’s World Cup in Canada. The Swedes have won all seven of their games so far and are level on points with Scotland, but with a game in hand.

One of Sara’s fellow defenders in the side was interviewed on here in April – VfL Wolfsburg’s Nilla Fischer, a Champions League winner in May. Although Sara has also played in Germany, from 2009 to 2013 with Frankfurt, unlike her Swedish teammate she did not mention the infamous schlager genre when asked about somewhat questionable music she has been exposed to through football and her travels.

“Probably I haven’t heard (bad music from teammates) yet, mostly because I like a lot of different kinds of music. I’m listening to almost everything, but not really hard rock.
“It depends on which mood I’m in.”

With 122 caps and five goals, Sara is amongst the most experienced in the Sweden squad for the upcoming England friendly. She is not the only Eskilstuna United player included, as uncapped Elin Wahlström was called up, as was midfielder and recent signing Malin Diaz who has since been forced to withdraw through injury.

Sara has been ever-present for Eskilstuna this year in their very first Damallsvenskan campaign. The team won promotion from the Elitettan and Sara joined after leaving Tyresö FF last year, the 2014 Champions League runners-up who were declared bankrupt in June and removed from Sweden’s highest division.

At the halfway mark in the Damallsvenskan, Eskilstuna are 5th in the table with 15 points. Top scorer (with four goals) Vaila Barsley comes from England while defender Louise Quinn represents the Ireland national team. It just so happens that the first record Sara ever bought was from a rather famous Irish singer!

“The first was an LP and a single – Sinead O’Connor ‘Nothing Compares 2 U’.”

Eskilstuna were last in league action on July 5th as they came from two goals behind to draw 2-2 with AIK. Viktor Eriksson’s team play next in the league on August 9th against Vittsjö GIK and they have recently brought in young American forward Kim DeCesare from the Boston Breakers.

At present, it is a 20-year-old midfielder making her way up through the Swedish national team ranks who is in charge of the team playlist. Sara meanwhile prefers not to put her music out there in the changing room!

“I keep my music to myself! I have a lot of DJs around me, but right now in Eskilstuna United it is Elena Sadiku who is our DJ.
“In the national team it’s Caroline Seger who keeps up with the DJ work.”

While with Djurgårdens, Sara won the Damallsvenskan in 2003 and 2004 as well as the Svenska Cupen in 2004 and 2005. Experiencing a 5-1 defeat by German team Turbine Potsdam over two legs in the 2005 UEFA Women’s Cup final, she would go on to join their Frauen-Bundesliga rivals Frankfurt four years later.

Sara was a runner-up in both the Bundesliga (2011) and the UEFA Women’s Champions League (2012) but she did win the domestic cup, the DFB-Pokal, in her time with the club. She would return to Sweden in 2013 and when she did, it was with much more knowledge and awareness than when she had left.

“As a twin, when I lived in Germany, the four years were when for the first time in my life I learned to stand on my own feet and feel secure in myself. Also, all the travelling you’re doing as a professional football player has taught me to appreciate being home and close to the family.”

As evidenced by the reaction as they hosted Euro 2013 and reached the semi-final, Sweden is undoubtedly one of the countries to best embrace women’s football. After playing in the 2007 World Cup as the national side were eliminated at the group stage, Sara was in the team as they made the quarter-finals of the 2008 Olympics and Euro 2009.

Third place at the 2011 World Cup in Germany then preceded a run to the quarter-final of the London Olympics a year later. As touched upon earlier, Sara had earmarked Euro 2013 as her international finale but she was convinced to carry on playing for Pia Sundhage. 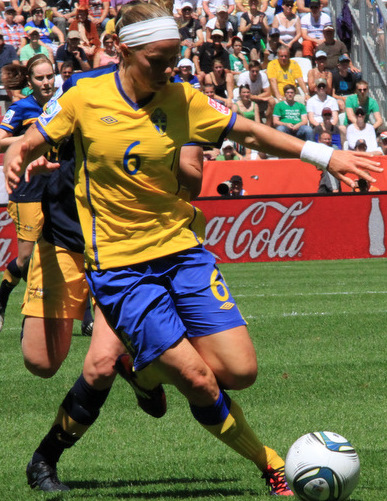 Turning 35 this April, she is extremely content to be back home at club level but did she ever consider joining us over here in England at any point in her career?

“I had my time away from Sweden in Germany and didn’t have any thoughts about England. I hope the league (FA WSL) in England is going to grow and be one of the best after Damallsvenskan.
“I’ve been in England more than one time but only with football and playing games. Most of the memories I have are of rain and tea!”

Plenty of people will say that Sara is not far off with that little picture of England but she has previously had an interest in something a touch more exhilarating than sipping a cup of Earl Grey in the afternoon.

“I have a motorcycle but I’m trying to sell it. I want to prioritise my family and get more time together with them.
“I love to just spend time with friends and family.”

Every player interviewed on here is asked to tackle perhaps the toughest question of all when it comes to the end. Putting themselves into a 5-a-side team, they are required to name four of their best career teammates to go alongside them in this fantasy line-up.

Sara has made lasting connections with many of those she has worked with in her time as a footballer so those who made it into this elite group are surely very highly thought of by her. Along with a Swedish duo, she went for two ex-Frankfurt colleagues, both of whom were in the German team that knocked Sweden out of Euro 2013, including the match-winning goalscorer that day!

“Nadine Angerer, easy – the best goalkeeper in the world and a good friend of mine.
“Stina Segerström – one of my best friends and a perfect defender next to me, when she’s not pregnant!
“Dzsenifer Marozsán – one of the best players in Germany and a friend for life after my year in Germany.
“Lotta Schelin – my roomie and really good friend. They just have to accept to play with me!”