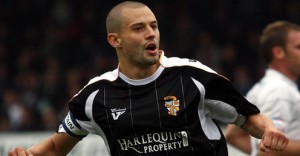 An all-time Ibiza classic still works the magic for Port Vale’s striker and captain Marc Richards, although it’s the start of his professional career at Blackburn Rovers rather than the White Isle itself that the tune evokes memories of.

Starting out with Staffordshire club Hednesford Town, the club who famously reached the FA Cup Fourth Round in 1997, Wolverhampton-born Marc moved to Blackburn in 2000 with the club in Division One under Graeme Souness.

It is those days that he recalls fondly whenever he hears the Nalin & Kane track ‘Beachball’, a top 20 hit in the UK in 1997 but also a true trance (also fusing house elements) anthem.

Marc, 29, recalls: “At Blackburn we used to play a certain song before we’d go out for a game to get us fired up. The old classic we used to listen to was ‘Beachball’ – listening to that takes me back to the time I spent there and I loved every second.

“The lads at Vale have a wide variety. Louis Dodds with the bands and a bit of old school, Rob Taylor and Stu Tomlinson with the dance and trance, Sammy Morsy with the r&b, I like to sit on the fence as I like most styles.

“Pre-match no-one usually takes over, just whoever has an iPod available, usually Adam Yates or Louis Dodds. Most clubs I’ve been at have been the same, as long as there is a mixture then everyone is happy.

“I think the first CD I bought was ‘Now 30’, something like that. My favourite artists and groups are Oasis, Chris Brown, The Verve, Coldplay, David Guetta.

“I have never been to a gig but I’m gonna make the effort to go to V Festival next time around as it’s local too.”

Marc’s professional debut came in October 2000 against West Ham United at Upton Park in a 2-0 Worthington Cup defeat for Blackburn.

The 2001/02 season brought about three loan spells, in each of the divisions outside the Premiership, with Crewe Alexandra, Oldham Athletic and Halifax Town.

The following campaign was spent from November onwards with Swansea City, then of the Third Division, where he bagged seven in seventeen games for the Vetch Field club.

In 2003 he left Ewood Park after his release to join Northampton Town of Division Three where the now-free-scoring frontman endured a drought of 20 games before an FA Cup double in a 4-1 win over Weston-super-Mare.

It was actually his 36th game in total for the Cobblers before he registered his first league goal, in a 2-1 away win at Darlington in February 2004.

His form really caught fire at the end of March as he single-handedly put Macclesfield to the sword at Moss Rose, claiming all four goals in a 4-0 success.

He finished the 2003/04 season with 11 goals as Northampton lost on penalties in the play-offs at the semi-final stage to Mansfield Town.

Knee injuries severely hampered 2004/05 for Marc and he spent time with Rochdale late in the season before signing for League One Barnsley in the summer of 2005.

The debut season at Oakwell was a memorable one as the Tykes secured promotion to the Championship with a play-off final win over Swansea, Marc started that day and managed 12 goals overall in 2005/06.

“Getting promoted with Barnsley to the Championship was a highlight. As well as making England appearances at Under-18, 19 and 20 level, and now being captain of Port Vale.”

Six goals were contributed by the striker in 2006/07 as Barnsley consolidated, in the early months under Andy Ritchie and then after caretaker manager Simon Davey had taken over permanently.

The opening month of that season had begun buoyantly to say the least for Marc as he scored three goals in the first month, including in away wins at Hull City and Colchester United. 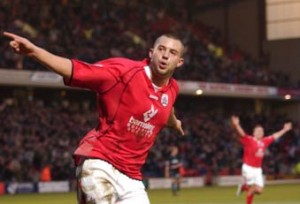 In 2007 he moved to Vale Park, although his first season was hard for everyone at the Burslem club as League One status was lost with a 23rd-placed finish.

Injury troubled him in 2008/09 but he still registered 11 goals to finish as Vale’s top scorer with the team finishing 18th in League Two.

Despite knocking both Sheffield clubs out of the Carling Cup (Marc scoring twice against United) the 2009/10 season brought difficulties, boss Micky Adams deciding to transfer-list the squad after three losses in a row.

Marc fought to overcome criticism from some quarters to finish up with a superb 23 goals as the Valiants narrowly missed the play-offs, four points off in 10th place.

In summer 2010 interest in his services was rife, with Carlisle United and Sheffield Wednesday two examples, but he stayed loyal to Vale signing a contract until 2012.

Along with Justin Richards, the duo registered 34 goals last season (20 from Marc) and the team sat 2nd in League Two at the time of Micky Adams leaving for boyhood club Sheffield United on December 30th 2010.

Replacement Jim Gannon’s tenure in charge was turbulent and the club finished three points from the coveted top seven, in 11th.

After relegation with Sheffield United, Adams returned to the manager’s position at Vale this summer and his departure last season was cited as a crucial factor by Marc when looking back.

“I have no doubt we would have been involved in a promotion campaign if he’d stayed. There’s been no changes this time from the manager, the same work ethic and togetherness.

“We’re a team that works hard for each other, we win and lose together. We’ve started well this season but it’s a marathon not a sprint, the lads heads are focused on the next game and nothing more.”

Hopes are high for this season and Marc, who despite being an opening day scorer has had an ankle problem early on and a suspension from a red card at Plymouth, is raring to go again.

“It’s been a frustrating start for me being injured and now suspended. I can’t wait to get back to full fitness and play some games, if selected of course.”

Port Vale are one point from the play-offs in 8th after nine games and it goes without saying that everyone at the club wants to finally achieve the goal of promotion this time around.

“The team is doing the business without me at the moment so I’ll need to bide my time to get back in. My head is firmly set on helping us get promotion.”

There is also this distinct level of focus reflected in Marc’s interests and responsibilities away from football, as he explains.

“My children take up a lot of my time at the moment. I am looking to do my coaching badges this year though and I have been involved in working with my local Sunday league side.”

Some of Marc’s favourite songs: