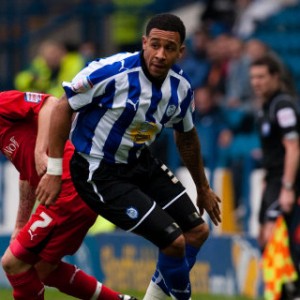 Sheffield Wednesday right-back Jon Otsemobor has been a frustrated onlooker for the most part in the early throes of this season and he hasn’t found a certain teammate’s choice of changing room music enjoyable either!

The ex-Liverpool youngster was in a rich vein of form during the final run-in of the 2010/11 League One campaign, more than proving his worth after a severely disjointed first few months at the club, predominantly due to injury.

Continued progression since has not been a possibility with Jon back in the treatment room, and while remaining around the first team he has seen one of the summer’s new recruits reigning supreme with the pre-match sound system!

“David Prutton has been playing his iPod recently. It’s awful crazy rock music and the gaffer (Gary Megson) tried putting his one on too but that ain’t no better at all!”

Jon hails from the Speke area of Liverpool and his musical preferences are somewhat far removed from those of the former Southampton and Nottingham Forest midfielder Prutton.

“My favourite artists at the moment are Lil Wayne, Jay-Z and Drake. Michael Jackson was my favourite when I was young.

“I can’t remember the first record I bought but my mother bought me one when I was really young which was the ‘Bad’ album. My mother used to play a lot of love and r&b music in the house too, Boyz II Men etc.

“I’ve been listening to Drake’s song ‘Marvin’s Room’ and another one of his called ‘Headlines’. They get played in my car on a regular basis these days.”

A product of the Liverpool youth system, Jon’s professional career kicked off with the chance to represent his boyhood heroes at Anfield in a November 2002 Worthington Cup win over Southampton.

He would gain further playing time that season with a loan move to Third Division Hull City in March 2003, playing nine times for the Tigers and scoring three, against Rushden & Diamonds, Shrewsbury Town and Wrexham.

In 2003/04, Gerard Houllier’s final season in charge of the Reds, Jon first appeared in the Carling Cup (as it was now known by this time) in a home defeat to Bolton Wanderers.

Crucial experience would also come his way with four Premiership games for Liverpool, including away at Newcastle United and Manchester City before a brief loan move to Bolton where he played once in the top division, in March 2004.

The following season he was loaned out by new manager Rafael Benitez to Championship Crewe Alexandra, featuring 15 times in all for the Railwaymen, including in a Carling Cup clash with Manchester United.

Jon also scored in a league game with Leicester City although his time with Dario Gradi’s side did not quite manage to propel him into Benitez’ first-team plans back at Anfield, no disgrace of course as the club would go on to lift the Champions League that season. 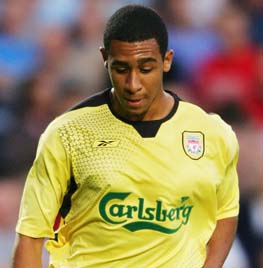 He left Liverpool in 2005 for League One Rotherham United but he takes heart from the experience he garnered from two of the big names he featured alongside.

“Steven Gerrard and Jamie Carragher were big inspirations. Just because they have done what every Scouse lad coming through the academy wants to do.

“Being able to train with them and learn from them will stand anyone in good stead!”

As for the music at Anfield…

“There were some dodgy music tastes! The lads used to just take turns on bringing their music in though so it varied a lot.”

He would spend half of the 2005/06 season with Rotherham before re-joining Crewe in January 2006 on a free transfer.

The club were battling relegation in the Championship at the time and although they failed to survive, Jon played his part in wins over Brighton & Hove Albion, Coventry City, QPR and current employers Wednesday.

Crewe, who were relegated with Millwall and Brighton in 2006, had appeared dead and buried at one point in the season but rallied late on with Jon one of those who won plaudits for their displays.

The following year in League One he made the PFA Team of the Year with a Carling Cup win over top flight Wigan a high point, although the club finished 13th and Jon would leave in the summer for Championship Norwich City.

His debut season at Carrow Road saw the Canaries finish 17th and he would play 47 times in total, scoring his first for the club in a 5-1 thrashing of Colchester United.

Suffice to say 2008/09 was a traumatic one for the East Anglia club as they were relegated to League One along with fellow recent Premier League sides Southampton and Charlton Athletic.

Playing 40 games in the relegation season Jon would appear on 17 more occasions in League One for eventual champions Norwich, scoring against Wycombe, before switching in January 2010 to Southampton.

The Saints’ League One promotion bid had been decimated by a 10-point deduction for a breach of insolvency regulations, and Alan Pardew’s side finished 7th, seven points off a play-off position.

After 19 games for the St. Mary’s club Jon left at the end of his contract, joining Wednesday last summer as Alan Irvine made changes after relegation from the Championship.

In a time of upheaval for the Hillsborough club, results suffered along the way (the promotion favourites finished 15th) and Jon failed to truly cement a starting place until March, again partly thanks to injury which has blighted his Owls career thus far.

When he did finally manage to get a run of games he was extremely impressive, winning admirers for his sound defensive play as well as his speed and precision of delivery.

“I felt I did well. I took my time to get into the team, being injured a lot especially didn’t help.

“I think last season was disappointing for everyone at the club because I think everyone expected us to just go straight back up. We were way off that to say the least.”

The summer was an immensely difficult one for Jon with an achilles problem rendering him unable to get up to full speed, and despite featuring in five games in August a calf injury has set him back in recent weeks.

“This season so far for me has been horrid. I missed all the pre-season games due to injury and it’s just been an uphill battle ever since.

“Hopefully I can get back out on the training ground soon, get fit and get back involved.”

Away from the primary objective of battling back to fitness for Gary Megson’s promotion chasers, the pacy full-back has also been casting his eye toward another venture.

“At the moment I am getting involved with a few friends in buying property.”

There have been 13 new players to join the South Yorkshire club so far this time around, including previous loanees Rob Jones (permanently) and Danny Batth returning, although there have been no nerve-jangling inductions demanded of the new additions..for now at least.

“The new lads have settled in really well. They haven’t had to do anything embarrassing yet, but they will have to very soon I’m sure of it!”