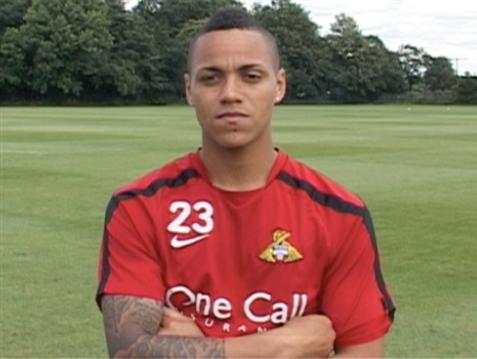 Rihanna and Chris Brown are undoubtedly two of the most discussed names in today’s mainstream media for a multitude of reasons but Doncaster Rovers’ Kyle Bennett gives the thumbs down to both, although in the case of the latter it was the singer’s footballing namesake he was referring to!
The 22-year-old ex-Wolves youngster had little hesitation in naming his teammate, the former Sunderland and Preston North End striker Chris Brown, as the worst for music taste at the League One side in his opinion. He did however acknowledge that he was in something of a minority in disliking the Doncaster-born frontman’s playlist.
“Obviously I’ve got the best taste in music (at the club), as you can imagine! The worst has got to be Chris Brown, he listens to everything different, one minute he listens to Drake, the next minute he’s listening to the worst rock songs you’ve ever heard in your life.
“Do you know what? Browny is (in charge of the team’s music) for some reason, everyone’s into it but I think his music choice is horrendous!’’

Kyle’s own preferred choices are pretty straightforward in comparison with his aforementioned colleague’s varying mix of sounds but he has an unexplainable disregard for one artist in particular.
“I like a bit of Drake, a bit of Rick Ross, yeah that’s about it really. Rihanna’s such a good artist but I don’t like her for some reason, I don’t know why, I think she’s an absolute egg.’’
The first CD the former Bury man bought had him thinking back to a previous interview he did with someone who spoke to this site all about his own music love earlier this year, Sky Sports host John ‘Fenners’ Fendley.
“I told this to Fenners. S Club 7 it was – embarrassing.’’
As someone born in the same year as Kyle I can remember the time when S Club 7 were riding high in the music scene and with their television show when we were kids so perhaps his choice is not as unforgiveable as he thinks after all! Nevertheless, he chose an arguably altogether more credible artist’s song when the time came for him to take centre stage and sing in front of his counterparts.
“I didn’t sing here but when I was at Bury and Wolves I had to do it, it was a bit scary. I think I sung Bob Marley at Wolves, I’m not sure what I sung at Bury.’’
Telford-born and a one-time Wolves youth, Kyle named an England international and another player to come out of the Midlands as someone others have praised for his vocal ability, though he has not witnessed any of his own teammates putting in a credible singing performance as yet.
“Not that I’ve seen but I’ve heard from a few other lads that Daniel Sturridge is meant to be good, but obviously I wasn’t there. Not to my experience though no, I haven’t heard anyone that’s good.’’
The list of acts Kyle has seen live gives a deeper look into his music taste and it generally fits in with the backing track used on his own current feature on Saturday morning programme Soccer AM, as will become clear.
“I’ve been to a few gigs, a few concerts, loads of stuff like Drake, Mary J. Blige, J. Cole, Jay-Z. I’ve been to a few to be honest, Drake was probably the best one I’ve been to.’’ 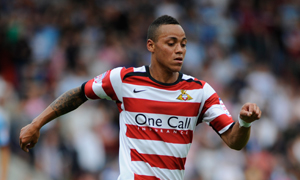 There was a news story at the start of this season stating that Doncaster’s chairman John Ryan had offered to give Kyle his Bentley if he scored 20 goals for the club this season. It was later clarified that the offer was a ride in the car as opposed to full ownership! Soccer AM have added a feature where they track Kyle’s scoring progress each week with the Lloyd Banks track ‘Beamer, Benz or Bentley’ fittingly playing while they introduce a scoreboard showing Kyle’s 20-goal target. He is currently on two goals for the season but he has been buoyed by the chairman’s challenge.
“Yeah I was impressed you know, it was a bit of an incentive to do well this season so I was really happy when he told me.’’

Having started out with Wolves, Kyle moved to Bury in 2010 and played 35 times as the Shakers won promotion to League One in his solitary season at Gigg Lane. His two goals for the club were a match-winning double against Crewe and he netted a further five strikes last season after a switch to Championship side Doncaster. The South Yorkshire outfit suffered relegation in Kyle’s first campaign at the club but everything is focused towards gaining an instant return to the second tier. Rovers are currently three points from the League One play-off places with a game in hand and Kyle believes Dean Saunders’ team can find a way past the stubborn resistance that some opponents may choose to use over the coming months.

“Well as a team I think we’re one of the best in the league if you ask me personally. Obviously we drew the last two games but in the first two we showed what we’re about and our intent.
“Teams are coming to our place or when we go away and looking to try and nick a point from us so a lot of teams are sitting back. It’s going to be hard for us so we’re going to have to be patient and try and break teams down.
“It’s good that everyone sees us in that way though.’’
Kyle’s brother Elliott is a Premier League player with Norwich City and the Canaries were drawn alongside Doncaster in the Capital One Cup. Kyle was speaking of his anticipation leading up to the game and how he hoped that Elliott would be fit enough to play. As it transpired, Elliott played the full game as Norwich won 1-0 at Carrow Road to advance to the fourth round. Kyle played the last half hour and the meeting was the first time the two brothers have faced each other in a professional game. Sheffield Wednesday striker Gary Madine is Kyle’s flatmate and one of his best friends in football but he understandably names Elliott as the fellow pro he holds in the highest regard, even if that does not extend fully to music!

“He just copies me, whatever I listen to he listens to! Obviously my best mate’s Elliott you know because he’s my brother and I know everything about him.
“I tell him everything first but I’ve got quite a few very good mates in football. I’ve got to say my brother though.’’