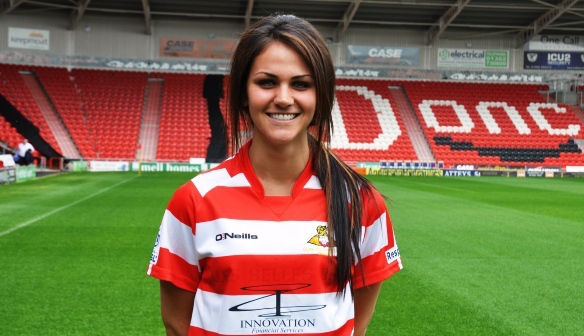 As a young Canadian-Italian pursuing her future a long way from home, Doncaster Rovers Belles midfielder Tania Pedron is an individual fixated on her goals, but beneath that there is an extremely tangible sense of identity deriving from her heritage, allied with the simple continuous desire to flourish.
Tania, 23, made the move from her team Barrie Spirit in her native Canada earlier this year to be part of the FA Women’s Super League with the Doncaster Rovers Belles, and to discuss the relevance of music to her is to genuinely learn about the community and family values instilled in her.
“Back at home I’ve been to a few gigs to support friends who play in bands, and I’ve gone to a ton of concerts. What I absolutely love doing is going to the cottage with friends and just hanging out in the sun by the water or at night by the fire and listening to friends play the guitar and sing, and have everyone sing along and enjoy the music.”
Whether someone truly loves music or just has a passing affection for a select number of songs and artists it cannot be denied that it brings people together and evokes the kind of feelings that you cannot accurately do justice to with a mere description. The meaning behind music choices can say a great deal about someone and the way it relates to the cultural background of Tania is evidence of this.
“I have a huge range of favourite artists, but I’d have to say the Italian artist Emma Marrone is my absolute favourite. I’ve always loved Italian music as I have been immersed in the culture all my life with both of my parents being of Italian descent and being an Italian citizen myself.

“When it comes to music I listen to absolutely anything and everything, the music I choose to listen to much depends on the mood that I’m in. I find that I tend to fall in love with a song and from there I will listen to other songs by that same artist or band.
“I enjoy music with lyrics over music with repetitive rhythms and beats. The first thing that captures my attention is the artist’s voice, I absolutely love the soulful quality of a raspy voice, and love listening to a cappella and acoustic versions of songs.
“Mumford & Sons and Coldplay are two of my favourite bands right now. I also really like Beyonce, Rihanna, Lauryn Hill and Bob Marley and since living in the UK I’ve come to really appreciate Ed Sheeran.
“I told you my taste in music is really all over the place!’’
This next act may not have made the list of Tania’s current favourites but once upon a time the colossal boyband were a hugely dominant force in music and they take the honour of her first ever record bought. 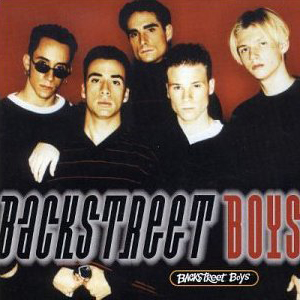 “To the best of my recollection I believe I ‘bought’ the first Backstreet Boys CD when I was 7. I basically just played ‘Get Down’ and ‘Quit Playing Games’ on repeat as I sang and danced around.

“My parents have a huge music collection at home with numerous records, tapes and CDs, even when my sister and I buy a new CD now we just add it to our home collection.’’
For someone who comes from a place like Tania does, it may initially seem that moving to South Yorkshire would be a simply huge change to adapt to. Nevertheless, she has found a distinct parallel between her home and Doncaster in the sense of belonging she feels, as she describes her path to women’s football in England.
“I am a proud Canadian raised in Vaughan, which is a suburb just outside of Toronto with a large Italian community, I went away for University and attended Wilfrid Laurier, which is located in a city just an hour and a bit away from home. It was like a home away from home for me, with a close knit, family-like community.

“After graduating last year I decided I wanted to continue playing football at a high level for a few more years before starting my business career. Playing in Europe was always a dream of mine, and so I finally decided on England, and came to Doncaster.

“Moving so far away from my family was a big deal for me, but from the moment that I arrived in Doncaster the coaching staff, players and all who are involved with the Doncaster Rovers Belles have made me feel welcomed, helping me to settle in right away.‘’ 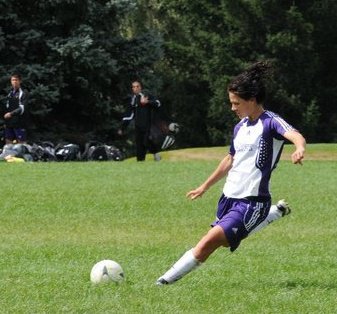 It could be suggested that Tania’s teammates’ musical choices offer a further glimpse into the culture that she has taken so swiftly to since she came to England.

“Thus far I’ve really enjoyed embracing the English culture. What I absolutely love about England is the passion surrounding football and being immersed in a culture united by the love of the beautiful game!
“The girls’ taste in music – boy does that vary tremendously! It’s funny because some girls may love a song that is playing while other girls are yelling ‘next one!’
“Generally, in the changing room we listen to music that is recently being played on the radio off of one of the girls’ iPods – songs that are upbeat and the girls can sing and dance to. One of this season’s highlights for me would have to be Le (Leandra Little) singing and dancing around to ‘Young’ by Tulisa – the girl’s got moves!
“Music is great to get the girls pumped up and in good spirits before matches.’’
Tania made reference to her education and career back in Canada and she enjoyed some considerable success on the field during this time.
“When playing for Barrie Spirit I played with a great group of girls and played for a coach with an addictive will to win. That team is special to me as we won the Ontario Cup Championship after our first year together, which I was never able to accomplish with any other team growing up.’’
While at university, Tania played in the same team as Alyssa Lagonia, one of her current colleagues now with the Belles, and her game made a lot of strides in the run-up to her move to England. She describes her principle footballing influences, with one vintage Italian standing out as her main influence.
“Growing up I watched a lot of football, mainly watching the Italian Serie A and the English Premier League. There are many players who I have a high regard for with Paolo Maldini, Kaka’ and Cristiano Ronaldo being three of them, but Italian footballer Andrea Pirlo is by far my biggest inspiration.
“As my family are all avid A.C Milan fans, I grew up watching and learning from his brilliance. As a holding midfielder I have always aspired to play like him.

“As a born playmaker he has vision like no other, has brilliant technique, and his control and composure on the ball is first class.’’
This season Doncaster Rovers Belles are currently second from bottom of the eight-team FA Women’s Super League with 8 points from 12 games but they have had to endure some testing circumstances.
“This season has been a very difficult one for the Belles, we have been struggling with numbers all season. I am a strong believer that great teams have deep benches and there have been games that we haven’t had a bench in at all, as we only had 11 fit players.
“Overall, the girls have fought hard in every game, but unfortunately, we haven’t been getting the results.’’
On a personal level, it has been all the more difficult for Tania as she has been denied the chance to help her teammates and enjoy her game due to a cruel injury sustained early on.
“After a month of being here I tore my MCL (medial collateral ligament of the knee) in training and as a result have been out for the season. I have been dedicated to my rehabilitation programme and am extremely excited to start playing again, looking to be fit for next year’s pre-season.’’
With the second season of the FA WSL nearing its conclusion, Tania has set her sights on returning recovered and revitalised for the next campaign but away from football she has a long-term objective that she is working towards. This is of particular importance of course because women’s football in this country, despite its continuing progress, does not provide its players with the riches enjoyed by the top-level male counterparts.
“I graduated with a Business and Administration degree from Wilfrid Laurier University, with a major in marketing. I love the creativity involved in marketing and combined with my passion of football and my love of sports in general I plan to eventually work in sports marketing.
“I love reading and as odd as this may sound, I love cleaning, as I find it very therapeutic. I also enjoy trying something new, whether it be food, sport or anything really, I just like a good challenge.’’
Tania’s background, her progress to this point and her ambitions for the future are clearly defined but there is a wider concept that she likes to live by. While her favourite artist Emma Marrone sings about looking for love in her song ‘Cercavo Amore’, Tania is on a quest of her own when it comes to her ultimate aim, and when you hear the essence of it, it is surely all that any of us truly want.
“All I want in life is to be happy and for my happiness to radiate onto others. Everyone will not always get along, but I believe it’s very important to always treat others with respect and you will be respected in return. 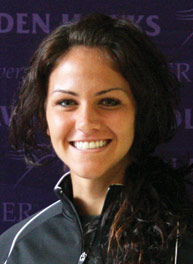 “Every morning when I wake up I am thankful to have yet another day ahead of me, and I go about my day with the goal to make even the smallest positive impact in the life of another. I believe one should never stop smiling because even a small expression like a smile is such a beautiful and powerful thing.”