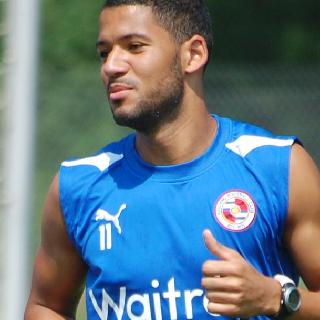 One of the most well-known and talented players in England outside the Premier League, Reading winger Jobi McAnuff may finally get the opportunity to grace the top flight next season, but as captain of the on-fire Royals side he has relinquished some of his less imperative duties of late!

At 30 the North Londoner and one-time Jamaica international has spent a decade in the second tier with six different clubs but it remains a mystery as to why he has never appeared in the league above despite numerous rumours of clubs’ interest over the years.

He scored his fifth of the season in Saturday’s 4-0 victory at Barnsley which saw Brian McDermott’s team leapfrog West Ham United into 2nd place in the Championship on the back of a scintillating recent run of nine wins from ten games.

It was my November interview with Jobi’s former Crystal Palace counterpart and current Millwall defender Darren Ward that alerted me to the classy wideman’s music love as it was revealed that Jobi often made team compilation CDs at Selhurst Park.

Jobi represented Palace from 2005 to 2007 but after putting together such a high amount of changing room playlists over the years recalling the contents of those ones from his Eagles days proved to be tough! 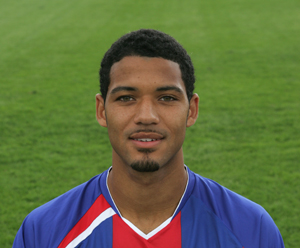 “That’s taking me back a bit! I would have done a mixture of r&b, dance and so on – to be honest I’ve done so many CDs I can’t remember!”

With ex-England international John Barnes his idol, Jobi’s love of the game began of course in the 80s, as did his affection for music which is evidenced by his childhood purchasing of one of hip-hop’s classic singles.

“I think it’s called ‘It Takes Two’ by Rob Base (and DJ E-Z Rock), I’ll have to Google it to be sure! I was about 7 or 8, it was a big thing going to my local record shop with my two sisters to buy it.”

The preference for that genre has stayed with him in the years since but as you can see from one of his examples his taste has altered a touch as time has progressed!

“My favourites are definitely r&b and hip-hop, but at the moment also Adele, that’s more my chilled out Sunday side! Jay-Z too of course.”

With over 500 career appearances so far and 51 goals Jobi has long been an established quantity in the English game and his story to this point has taken in six reputable employers, all in the same division for the duration of his stay at each club.

In his third campaign in administration-stricken Wimbledon’s first-team he moved to Alan Pardew’s West Ham United, making the February 2004 transfer to Upton Park as the fourth Dons player to do so that season along with Adam Nowland, Nigel Reo-Coker and David Connolly. 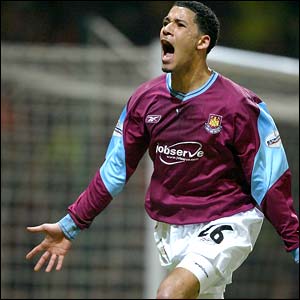 The following season however saw him on the move again as the Hammers looked to rake in much-required funds and Jobi ventured to South Wales, becoming a standout performer for Cardiff City as the Bluebirds finished 16th in the newly-named Championship.

The pacy performer’s status as a highly valuable asset would lead him once more to be sold in light of financial uncertainty as he returned to London with Crystal Palace in the summer of 2005.

Iain Dowie’s side had just been relegated from the Premier League and Jobi, who had hit 15 goals in his previous spell at Selhurst Park with the groundsharing (and by this time sadly defunct) Wimbledon, was to score eight goals as the Eagles reached the play-offs.

The team were beaten in the semi-final by eventual play-off winners Watford and would fail to reach the top six in 2006/07, though Jobi contributed another six goals from the flank.

A fee of £1.75million took him to Watford in June 2007 and five goals in two years would follow, in addition to another unsuccessful tilt at play-off glory in 2008 as the Hornets were defeated by Hull City over two legs.

August 2009 brought about his most recent relocation as he headed to Berkshire to join current employers Reading and the team accelerated away from an unlikely Championship relegation battle to claim 9th place in his first season at the Madejski Stadium.

Brian McDermott had taken over in December 2009 and guided the Royals to the play-off final in 2010/11 with Jobi grabbing his fifth of the season in a 3-0 win at former club Cardiff in the semi-final.

Despite a rousing comeback from 3-0 down at Wembley, Reading lost 4-2 to former manager Brendan Rodgers’ Swansea City in the final, but going one better this time around looks a distinct possibility.

The goals of the likes of Adam Le Fondre, Simon Church and Noel Hunt have been more than supplemented by experienced goalgetter Jason Roberts since his arrival from Blackburn Rovers, and reliable performers all over the park have given the team a great springboard for promotion.

In the midfield is the partnership of the experienced Mikele Leigertwood and the former Turkish Under-21 captain Jem Karacan, a duo that has helped to provide an important spine during the recent victories.

With his status as captain Jobi has overseen pre-game music before but has taken a bit of a step back recently, with Karacan the new man in charge!

“Yes I have some say but I’ve passed my responsibility to Jem now. He’s doing OK, it’s working at the minute but it’s not all my cup of tea.”

Hull City man and Australia international Richard Garcia described on here how goalkeeper Adam Federici’s song choices during the 2010 World Cup give him a nostalgic feeling to this day, but Jobi delivers a less favourable verdict on the stopper’s preferences at club level!

“Feds likes what I would call depressing rock! He’s put on CDs in the past and has killed the whole room – we had it off quickly!

“In terms of good ones, well Shaun (Cummings) and Ledge (Leigertwood) listen to the same as me, and Jem (has good music taste) most of the time!”

Counting on your colleagues to step up to the plate is a crucial part of the game, especially for a team gunning for success as Reading are, but Jobi will hope the players show a bit more solidarity in the remaining nine games of the season than they did when he had to sing for his initiation at the club!

“Yes this was the first time I had to do it and I was shitting myself! I sang one by Musiq Soulchild, I was supposed to have some backing from teammates but they ducked out!”

The winger has spoken before of his intention to become an agent when he retires but to act as a mentor initially and to provide the kind of know-how that someone who has never played professionally could not give to a player.

He grew up in Tottenham and helping youngsters in his childhood community is also on his agenda, something he is looking to do with ex-Wimbledon starlet Lionel Morgan, a player who was forced to retire at the age of just 21 due to injury.

Together they also started a company last year which takes up a portion of Jobi’s off-field ventures as does another key interest, which is pretty handy considering the idea of this site!

“Music of course, my Dad is a musician, mainly a songwriter but he plays guitar and more. My uncle Winston McAnuff is a musician, he’s quite big in France and I saw him in London recently.

“Other than that there’s also my company Infinite Sports Management / Academy.”