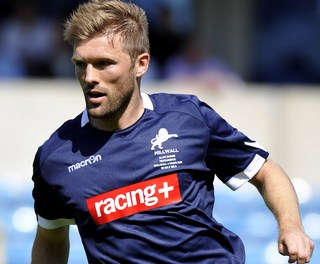 The man who goes by the nickname of ‘the Peckham Beckham’ is in his second spell at Millwall and defender Darren Ward has seen varying quality in teammates’ music tastes during his career, illustrated best by his time at Wolverhampton Wanderers.

It is almost fifteen years since Darren, 33, made his professional bow with Watford and his time in the English game since, characterised by this longevity, has seen the Kenton-born centre-back represent six reputable clubs.

He spent two years with Crystal Palace and although out on loan at the time was a Wolves player when they won promotion to the Premier League in 2009.

It is from these two clubs that he most vividly recalls the players’ musical preferences.

“At Palace there were all sorts and quite a few who liked the heavy metal/rock music which is not really my cup of tea. Jobi McAnuff was into his music quite a bit and normally put a CD together with a selection of the lads’ favourite songs, which was always interesting.

“At Wolves Daniel Jones had a pretty poor taste of music and was a bit behind the times, Matt Murray had a good taste and wide selection. Match days it would normally be Andy Keogh who thought he had a bit and Mick McCarthy would just go with the flow, with the occasional raised eyebrow.”

Darren’s younger brother Elliott, also a central defender, helped West Ham United back to the top flight in 2005 and was bought by Coventry City for £1million in 2006.

Elliott, 26, is now with Premier League Norwich City and appeared alongside former Sky Blues teammate Clinton Morrison on Soccer AM in 2009, choosing the song ‘Informer’ by Canadian artist Snow as the soundtrack to his highlight video.

The track was also chosen by Darren for this site as one of his favourites though he describes the musical preferences of his sibling as quite conventional when they were growing up.

“Elliott has a wide selection like me and creates some talking points over certain song choices. As a young lad he was well into Westlife, Oasis, Take That and Michael Jackson, as we all were.

“I like all sorts of music but mostly go back to Plan B, David Bowie and Calvin Harris. Michael Jackson’s ‘Thriller’ was the first I bought, I was about 12 or 13 at the time.”

Back in August, fellow Millwall player Shaun Batt spoke to the site and named midfielder Liam Trotter as the main influence on the pre-match music in the changing room and the ex-Ipswich man’s choices are still popular.

“Trotts plays his selection most of the time which is good, it varies from r&b to funky house. There is quite a variety within the team but a lot of the lads listen to hip-hop and r&b.

“I would say there are quite a few who have bad tastes as it is always the same ones playing their iPod in the gym and the changing room!”

Darren was a youngster at Watford when former England manager Graham Taylor repeated his success of the 70s and 80s at the club by guiding them to promotion from Division Two in 1998 before taking them to the Premiership the very next season.

He gained important playing time in Division One with QPR in the 1999/2000 season before establishing himself in the Hornets line-up in the latter part of their spell in the top flight that year. 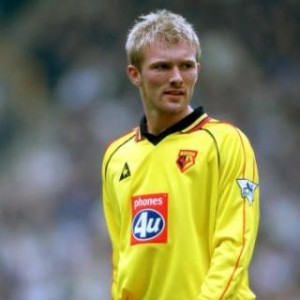 Leaving Hertforshire in October 2001, Mark McGhee paid £500,000 to bring him to The New Den and his Millwall side reached the play-offs in Darren’s first season.

Undoubtedly though the club’s most memorable achievement during his first stay with the Lions was reaching the FA Cup Final in 2004, which led to a brief UEFA Cup campaign.

Under player/manager Dennis Wise they successfully made it through to the Millennium Stadium showpiece but were defeated 3-0 by a Ruud van Nistelrooy double and a Cristiano Ronaldo goal.

“It was an amazing achievement by all who were involved and ranked up there with the highlights of my career, along with playing against my brother Elliott when he was at West Ham.”

After Crystal Palace’s relegation in 2005, boss Iain Dowie signed Darren for £1.1million as part of his plan to return to the Premiership at the first time of asking.

Goals were pretty frequent for the defender in his first year with the Eagles, as he scored six in total after getting off the mark in the first month, with the matchwinner at home to Plymouth. 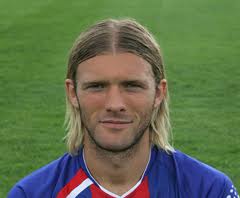 The Selhurst Park side were beaten in the play-offs in 2005/06 by eventual winners Watford in the semi-final and 2006/07 was disappointing as they finished 12th.

Starting opportunities had ultimately become scarce under the next manager Peter Taylor and Darren joined Wolves in the summer of 2007 for an undisclosed fee.

After 32 appearances in his inaugural campaign at Molineux he returned to his first club Watford on loan in 2008/09, scoring his solitary goal of that season against another of his former employers, QPR.

He linked up with Charlton Athletic in January 2009, his third South London club, although the Addicks were unable to stave off the threat of relegation to League One.

It was back to Millwall in September 2009, initially on loan from Wolves who were by now in the Premier League, and the move was made permanent in January 2010.

After relegation in 2006, promotion back to the Championship was secured in May 2010 with a win over Swindon Town in the play-off final, Darren playing the full game in front of 73,108 at Wembley.

Last season was an extremely positive one for the club as they settled back into the Championship excellently, coming in 9th place.

Kenny Jackett’s side are of course aiming to better that this time around and currently occupy 17th position with 18 points, although there is the small matter of another 30 games to be contested yet.

“We have had a bit of a slow start but are confident that we will come strong. Your aim is always to do one better and we are going to work hard to achieve that.

“It has been great to return to the club where I have had many good times and hard work will hopefully bring more good times here.”

Darren has been working as a director for Pro Team Sport with Sports Club International’s Roger Broadhead, and they supply personalised football trophies as well as other sports equipment.

“It came about after a friend of mine approached me with an idea after seeing that I had started up two businesses previously. We saw that there was a good opportunity and decided to go for it.

“We are now in a good position and building the company slowly, you can visit our website for monthly blogs written by me and for some outstanding deals on trophies and essential sports equipment. I keep my involvement very low-key at the minute due to my family and football commitments which are the priority.

“I’m also involved in a financial company and a cattery. I feel it’s important to look ahead and create your life after you have to hang your boots up and there is no better time to do that than when you are playing due to the profile you currently have.

“This cannot interfere with your football though and you have to have some very good people around you who realise this and support you. In every business I’m involved in we take pride in delivering a good service and genuinely want to help people through very tough financial times at the minute.”

After 250 games for Millwall, Darren has long been a familiar fixture at the Den and during his first spell with the club he received the nickname alluded to in the opening of this article. 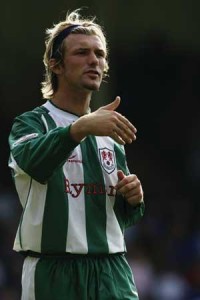 Although admittedly an entirely different type of player to the ex-England skipper, Darren’s hairstyles earned him the moniker ‘the Peckham Beckham’.

“It’s a classic and the first time I came across it was when I picked up one of the local papers and there was a picture of me on the back page with the nickname which seems to have stuck with many people. It could have been worse…”

Some of Darren’s favourite songs:

“All classics in my eyes and they give me the feel good factor for sure!” he said.