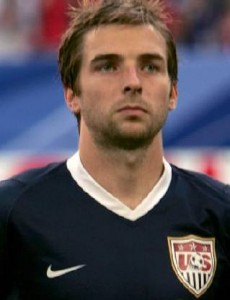 Sporting Kansas City winger Bobby Convey and Everton goalkeeper Marcus Hahnemann made history together as Reading’s first ever World Cup players in 2006, although music is an area in which the two former teammates go their separate ways.

Steve Coppell’s Royals set a whole host of new Football League records in the 2005/06 season including reaching 106 points as the Berkshire side trounced all in their way en route to promotion to the Premier League.

That summer of course saw the World Cup in Germany and Bobby featured in all three of the USA’s group games, providing the free-kick against eventual champions Italy that was sliced into his own net by Azzurri defender Cristian Zaccardo.

The goal was the only one the Italians conceded until Zinedine Zidane’s chipped penalty in the final and while Bobby and his compatriot Hahnemann shared the experience of the showpiece tournament as well as five years as Reading colleagues, Bobby favours an altogether different vibe to the Seattle-born stopper before games!

“Marcus Hahnemann has terrible taste in music! He listens to Metallica and heavy metal, I definitely don’t like that because it makes you angry and I like to be happy when I’m playing soccer.

“I like Zac Brown Band, Jay-Z, Adele and Drake, I dislike techno. The first record I bought was by Green Day when I was in the 7th grade.”

The genre he identifies as his least preferred gives a pretty good indicator of his current feelings on the music that can be heard in the Sporting Kansas dressing room at the Livestrong Sporting Park and at away venues!

A native of Philadelphia and a Penn Charter High School (Pa.) attendee, Bobby’s professional career took off in 2000 with D.C. United as he became the youngest player at the time to ever be signed by a Major League Soccer club, turning just 17 years old in May of that year.

His first career goal came in 2001 and was against his future employers, who at the time were in their previous guise as the Kansas City Wizards, and he would play in both play-off matches against Chicago Fire in 2003.

After 89 games, 8 goals and 16 assists for D.C. he left Washington in the summer of 2004 to join Reading in the second tier of English football, playing 22 times in his first season at the Madejski Stadium.

His second season at the club brought about the goal-laden promotion success mentioned earlier as Bobby scored 7 goals with a superb solo effort in a 5-0 August 2005 win over Millwall, a game in which he scored a double.

For myself, I saw him give away a penalty at Hillsborough in a 1-1 draw against my team Sheffield Wednesday after a foul on fellow countryman Frank Simek, though their promotion was already secure by then!

The following season in the top flight saw the left-sider restricted to 12 appearances but he did play 83 minutes of Reading’s first of the season, a game that saw them come from 2-0 down to defeat Middlesbrough 3-2 on their Premier League debut.

He made 24 appearances in 2007/08 and scored in a 4-2 Carling Cup defeat to Liverpool, a game dominated by a hat-trick from the Reds’ big-money signing that summer, Fernando Torres.

A knee injury picked up during the 2006 World Cup severely hampered the remainder of his career in England and was even described by former Royals assistant manager Kevin Dillon as the low point in their outstanding 2006/07 season in the top division.

Bobby left Reading in early 2009 before returning to the US to join San Jose Earthquakes and the injuries are the only downside of a fruitful stay over the pond. 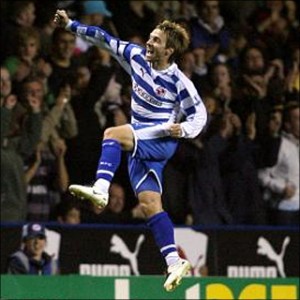 “No regrets – I only regret getting injured. I wish I could have stayed there longer, I really enjoyed it, my teammates and the fans were great and it really helped me to become a better soccer player.”

As outlined in my previous feature on Reading captain Jobi McAnuff, the club are well positioned to return to the top flight this season and Bobby has been monitoring their progress from Kansas City.

“I still follow Reading and they’re right there for automatic promotion. The coach now (Brian McDermott) was the reserve team coach and he helped me a lot while I was there.”

While with San Jose he scored twice in the 2010 MLS Cup play-offs as the Quakes beat the New York Red Bulls in the Conference Semi-finals, playing three campaigns (an MLS All-Star in two) with the California outfit before linking up with Sporting Kansas City for the 2012 season.

The 2010 MLS Comeback Player of the Year is now 28 and it has been a perfect start to the new campaign as the team have won their opening three MLS games, defeating Bobby’s old team D.C. United away before home successes over New England Revolution and FC Dallas.

“I think we have a great shot at winning the MLS Cup.”

Kei Kamara’s match-winning strike in last weekend’s 2-1 win over Dallas made it a 100% start at this stage for the first time since 2006 and former US international Peter Vermes’ squad are in high spirits.

Bobby made his international debut as an 18-year-old and has made 46 appearances for his country although it remains a mystery why such a high level performer has been in the international wilderness in recent years.

Nevertheless, the challenges on the field at club level are currently dominating the thoughts and perhaps an interesting point Bobby has made in the past may be of interest to fans in England.

He discussed in a 2010 interview how the battle to stave off relegation in England means there is a somewhat different dynamic to that of the MLS, where of course there is no demotion for clubs at the bottom of the table.

Away from the sport, the USA’s youngest squad member at the 1999 FIFA U-17 World Championship unwinds in relatively conventional fashion.

“I like eating, going to the dog park with my dogs, just being outside and playing golf.”