Whether the male or female game, ‘football’ or ‘soccer’, supporters are the lifeblood of the sport and it is a concept far from lost on Boston Breakers midfielder Joanna Lohman, who epitomises so much of her profession’s great and good.

Playing for clubs in various countries as well as winning seven caps for the US Women’s National Team, Joanna’s experience on the pitch is there for all to see. Her work away from it includes running the JoLi Academy with partner and Breakers teammate Lianne Sanderson, helping specifically to grow the women’s game in developing nations.

The former Philadelphia Independence and Washington Freedom player, 31, is at the beginning of her second season with the Breakers in the National Women’s Soccer League and is a terrific ambassador for her team, the league and indeed the game as a whole. Women’s soccer is immensely popular in the US and after the Women’s United Soccer Association (2000-2003) and Women’s Professional Soccer (2009-2011) the common objective is for the NWSL to succeed where those pro leagues ultimately fell short.

In order for that to be achieved, the players have a responsibility in promoting the game and although they are not the decision makers in terms of league management they will always be hugely effective in reaching out to people. Joanna appreciates that so strongly and constantly flies the flag for women’s soccer in any way she can. Interaction with supporters is a crucial aspect of that and Joanna shares how important that is in her overall affection for the game.

“I love my teammates and the fans and one of the best parts of being the professional soccer player is being a part of a team. Being able to work towards a central goal with your friends is one of the most empowering environments.
“Also, being embraced by the fans of the city is an amazing feeling. They treat us like we are a boy band.
“It still makes me so happy to sign an autograph, take a picture with a fan, and see the smiles on their faces when we get to interact with them.”

Joanna gets to feel like part of a music group simply from the adoration of the Breakers supporters, but maybe there is also some symmetry between choreographed dance routines and the way players familiarise themselves with moves on the training field!

Music has a lot of significance in Joanna’s life and also holds the key to a particularly special memory. She and Lianne Sanderson first met when they played at Philadelphia Independence in 2010 and they have previously recalled the time Lianne went to visit Joanna at her lake house in Deep Creek Lake, Maryland.

The two of them dancing around with Joanna’s mother listening to Pink is a moment they won’t forget as that weekend was the one that brought them even closer together. Joanna describes more of her music taste and it is predominantly about the energy and feeling invigorated.

“I’m obsessed with electronic and house music. My favourite artists are more DJs: David Guetta, Avicii, Bob Sinclar, Swedish House Mafia etc.
“The beats make my heart race. I feel so alive.
“Music is important to me but I don’t have many songs on my phone. I don’t have an iPod, I don’t own fancy headphones.”

While at Penn State University, Joanna was a standout for the Nittany Lions and was named Big Ten Player of the Year in 2003. Four years earlier, she was at Springbrook High School and honoured as the Gatorade Maryland Soccer Player of the Year. Back in these days, Joanna would listen to a singer who according to numerous interviews on here is something of a symbol of the Canadian national team.

“Celine Dion had a huge impact on me in my high school days. She was my friends’ and my favourite artist.
“We would blast her music and sing at the top of our lungs.”

It was a slightly different vibe though for the first record Joanna ever bought!

“Blink 182 because I thought I was really cool.”

Followers of the Breakers’ Twitter account are likely to know that Lianne Sanderson is one of those who refers to the team as the ‘Heartbreakers’. The ex-Arsenal star has returned to the England team in recent months under new coach Mark Sampson after over three years away. She was a resounding success in her debut season in Boston, scoring five and assisting seven, and besides being named captain this time around she continues to help lead the way ahead of kick-off.

“Lianne Sanderson is the resident DJ. She loves music and always brings her own speaker everywhere she goes.
“She is so reliable when it comes to music and she always has a playlist. Jazmyne Avant is also music aficionado; her and Lianne run the show in the locker room.”

Last year was Joanna’s first with the Breakers and she played in all 22 games, starting 21 and scoring twice. Lianne Sanderson and defender Cat Whitehill were the only other ever-presents in a side that finished 5th, six points from a coveted play-off place in the top four.

Signing in late June after starting the season with Portland Thorns was defender Jazmyne Avant. The 24-year-old is the current starting right-back in Tom Durkin’s team and Joanna has already highlighted her part in the Breakers’ playlist. She also gets a mention alongside Canada and Houston Dash’s keeper (and a past interviewee on this site) for her enrapturing vocals.

“Jazmyne Avant has a beautiful voice. She has sung many times for our team, mainly because we force her to, but she is obviously very talented.
“Also, Erin McLeod has an incredible voice. She has a very distinct sound and I love listening to both of them.”

A former captain of the US Under-21 and Under-23 teams, Joanna is a big believer in living life as authentically as possible. Therefore, she will probably be quite proud of a certain Seattle Reign forward and someone she knows well for going after the genre she enjoys, no matter how surprising it may be to some! Joanna named her when asked which players she has known with particularly different musical preferences.

“Dani Foxhoven. She is the sweetest girl yet likes to go to hardcore metal concerts on her own.”

Coming from Silver Spring, Maryland, Joanna ventured to Sweden to play for Bälinge IF before going on to spend time training in Japan with midfielder Rebecca Moros, now with Portland Thorns. While with Philadelphia Independence, she played her part in the team reaching the WPS Championship game in both 2010 and 2011.
Joanna scored five goals and was second only to Amy Rodriguez (with 12) on the 2010 Independence team. It was in this campaign she first got to play alongside Lianne and besides Boston they have gone on to represent Spanish club Espanyol, D.C. United of the USL W-League, and Cypriot champions Apollon Limassol together.

Their move to Spain actually came about through another player who was on here last year – Spain’s Vero Boquete. The 27-year-old midfielder was with them at Philadelphia Independence and a TV crew came over to film her. She and part of the crew played their part in connecting Joanna and Lianne to the people at Espanyol and the door was opened to another adventure.

For the question of who Joanna would choose from her career teammates to record a cover version of a song with, there really couldn’t be anyone else.

“I would have to choose a duet with Lianne Sanderson. We would sing Pink and (Nate Ruess from) Fun – ‘Just Give Me a Reason’.” 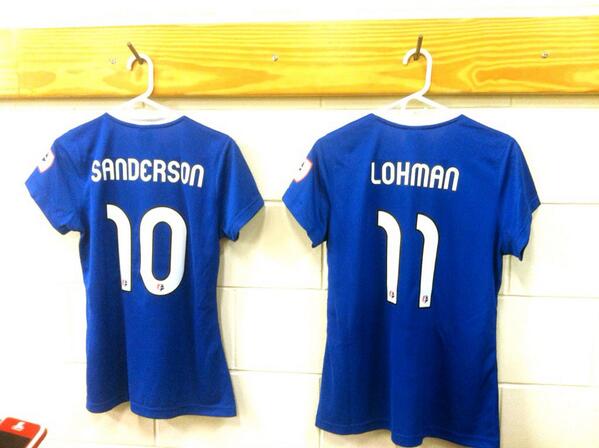 One of the incredibly enlightening trips Joanna and Lianne have embarked on with the JoLi Academy came when they headed to the east of India back in 2012. In Jharkhand, a place where everyday resources and privileges are so minimal, they got to spend a lot of time amongst the community understanding the plight of those who live there. Managing to put on the academy in such a setting further convinced Joanna that anything was possible.

With a BA in Business/Mathematics from Penn State University, Joanna is also vice president of Tenant Consulting, LLC, a Washington-based commercial real estate firm. She has wanted to play soccer full-time since she was six years old and the passion she feels when she plays and the satisfaction that gives her makes all the knocks and sacrifices worth it.

Empowering women and changing their lives through soccer is an ongoing objective of the JoLi Academy so what has Joanna’s life in the game so far taught her the most?

“Playing a sport has been instrumental to my personal development. It has taught me to be fearless and to be open to taking risks.
“It has given me confidence to follow my dreams. It has also encouraged me to build a healthy lifestyle and stay active.”

We are in the second season of the third professional women’s soccer league and it is a crucial time for all those involved to go to every effort to safeguard the future of the competition. There is no doubt that so many people love the women’s game and you can look around the crowd at every NWSL game to see evidence of that.

The core support is fundamental of course and it is the players like Joanna especially who go that bit further in representing women’s soccer and communicating it to a wider audience. It is the Breakers’ home opener tonight with Houston Dash at Harvard Stadium and Joanna would love to go one better on a personal and team level than last Sunday against Seattle Reign.

The Breakers were beaten 3-0 but came so close to taking the lead after Heather O’Reilly picked out Joanna who hit the bar and saw her effort bounce down onto the line (and possibly over). It is a season to be truly excited about for fans, players and staff and Joanna will surely continue with intensity on the field and the warmth off it that makes her so popular.

We leave the interview with the Breakers’ number 11 looking back over those she has played alongside in her career so far. Asked to put herself into a 5-a-side team with four of the best players she has ever worked with, here is Joanna’s response.

For Boston Breakers tickets head to www.breakerstickets.com or call 617-945-1704.