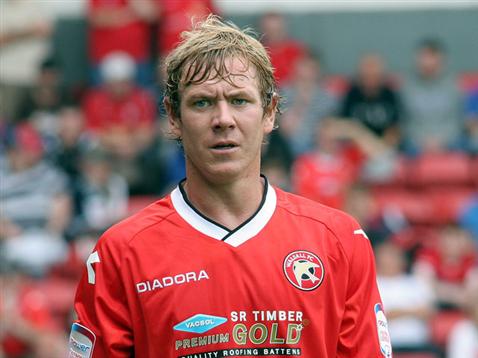 In light of the dominant music tastes that have been circulating around the Walsall dressing room in recent months, defender Dean Holden is linking up with a fellow experienced pro in the team to get the euphoria of yesteryear flowing once again.
The ex-Oldham Athletic man, 33, has added his character and on-pitch know-how to the League One Saddlers since his arrival in the summer and it has certainly been an enjoyable chapter of his career to this point. Although he has been frustratingly sidelined in recent weeks he has remained an active part of the ranks as Dean Smith’s side have pushed right up into the chasing play-off pack with a run of five league wins from six games. As can often be the case when the seasoned campaigners and some of the more up-and-coming players meet there has been a soundclash of sorts, and with the help of the team’s captain Dean has taken action!
“It’s all this ‘cool’, I don’t even know how you’d describe it, r&b? It’s a massive part of the squad that listens to it as well.
“I’ve always been a big fan of the old school dance and played it at the clubs I’ve been at, even though you get ‘shut up old man’ from a few sometimes! Me and Buts (Andy Butler) have had the Ministry of Sound CD on though with the 90s dance.’’
The defensive duo’s choices have managed to appeal to the sensory receptors of some of their counterparts, with three of the English lads springing to mind for Dean, as well as the goalkeeper who is more Budapest than Blackburn!
“Andy Taylor, George Bowerman, David Grof and James Baxendale love the 90s tunes – ‘Rhythm Is A Dancer’ (Snap), David Morales ‘Needin’ U’.’’
I always like to make a start on these interviews by getting a good feel for the kind of music that the player favours. It works as an alternative way of offering an insight into their persona and their likes and dislikes, and in the case of Dean it appears that although the aforementioned club skipper may be one of his allies with the 90s CD there is also a point when it comes to tune choice that they head off in separate directions!
“I’d say I’m a fan of Ed Sheeran, he’s one of my favourites. I love The Courteeners as well, and the old school 90s dance.
“The first record I ever bought I think was Snap ‘Rhythm Is A Dancer’, so I was about 12 or 13. I hate heavy metal, and I think Andy Butler might be a fan of that kind of stuff!’’
A pretty frequent festival and gig attendee, Dean certainly has an extensive list of live performances he has been to and there are two bands in there that originate from his part of the world, the North West. One of these examples was also the inspiration for his initiation song soon after he had joined Walsall prior to this season.
“I’ve been to loads, what’s the best I’ve been to? I went to Westlife in 2000 – that was unreal.
“I’ve been to see The Courteeners – unbelievable. I’ve seen Oasis a couple of times who were amazing, and I went to T in the Park when I was up in Scotland (while playing for Falkirk).
“Every club I’ve been at I’ve sang something different, at Walsall I did ‘Don’t Look Back In Anger’ (Oasis). I took my shades and stood up on my chair with my trackie top on and my knife and fork for a microphone!

“In my first year as an apprentice at Bolton I did… actually you probably won’t be old enough, how old are you? (When told I was 22) Oh you probably will then, I did the song from Euro 96, ‘Three Lions’ (Baddiel & Skinner & The Lightning Seeds).’’
On this site last season, Walsall’s Alex Nicholls (now with Northampton) discussed amongst other things his views on manager Dean Smith and what his approach is with the players. When myself and Dean (Holden) discussed the Saddlers gaffer however it was music that we delved into first and a prominent member of his coaching staff managed to put in a vocal performance that stuck in the mind.
“The gaffer loves The Stone Roses and before the warm-up and things like that he’ll always put ‘This is the One’ on, which they play at Old Trafford, so as a big United fan I love that. Richard O’Kelly, the assistant manager, has been the best for singing.
“He did Frankie Goes To Hollywood ‘Relax’ but he put on his own words to it!’’
After making the breakthrough into professional football with Bolton and spending a brief loan spell in Iceland with Valur, Dean moved on to fellow North West club Oldham Athletic, initially on loan in the 2001/02 season. The deal became a permanent one at the end of the campaign and he would make his name as an established part of the first team at Boundary Park. Working under the management of the likes of Andy Ritchie, Mick Wadsworth, Iain Dowie, Brian Talbot and Ronnie Moore he would feature in well over 100 games for the Latics, scoring 11 times, captaining the side and becoming a revered figure with many. His next port of call would be Peterborough United, where he stayed from summer 2005 to the January transfer window of 2007 in which Falkirk of the Scottish Premier League came calling. After two and a half years with the Bairns he joined Shrewsbury Town in 2009, also representing Rotherham United in a loan spell early in the 2010/11 season. A switch to Chesterfield in January 2011 to join his former Oldham counterpart John Sheridan brought promotion to League One in his first few months as a Spireite. Much of the 2011/12 campaign for Dean came with Rochdale, who were unable to stave off relegation to League Two, and he departed Spotland and his native North West last summer. 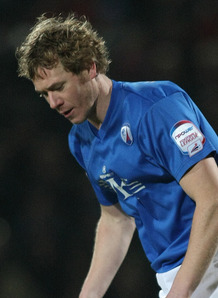 Dean’s early impact at Walsall has seen him score the only goal in a 1-0 win over MK Dons in September, as well as one in a 1-1 draw with Hartlepool in November. In fashion that has been characteristic of his career Dean has made an impression on followers of the club and he speaks with real feeling when he explains how it has been since he became a Saddler.
“It’s a brilliant place to come and work every day. It’s a great environment with the players, the manager and the staff and a lot of the stuff off the pitch is just brilliant as well.’’
Although he has been ruled out with injury since last month, the team’s recent resurgence of five wins from six games has catapulted them away from danger in the League One table. Sunday’s 3-1 success away at Preston North End lifted them into 12th place on 38 points, five points away from the play-off places, although they have played more games than their rivals at this point. While making his way back into the first-team picture after his slight setback, Dean, who has experience of numerous clubs, personnel and objectives, assesses the team dynamics and why he believes the Saddlers have a chance of more good fortunes this season.
“I would say it’s our willingness to get better as a team. We’ve got a really good, talented group and the manager focuses on learning from our mistakes rather than just watching loads of videos, which is much better for me.’’
When Dean took his pick of the best players he has ever worked with to play alongside him in a fantasy 5-a-side line-up for this regular feature the first name he went for was a midfielder and friend from both his Oldham and Shrewsbury days. There were also two former Bolton teammates, one of which became a two-time Premier League title winner, and his last-minute choice of a true midfield master, who he put in having initially gone for striker Dean Holdsworth!
“Paul Murray – a grafter and my best mate, like myself he just loves football. He is a model pro and he maximises every single thing.
“Jussi Jaaskelainen in goal – he worked so hard to improve his game and he became very consistent. Eidur Gudjohnsen – he just had natural ability and scored some great goals, so strong too.
“John Sheridan – the best player I’ve played with. Vision and a range of passing, never seen him give the ball away, demands high standards.’’