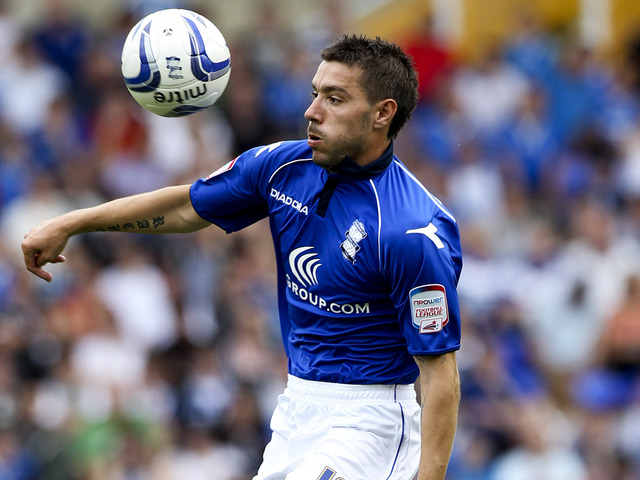 Birmingham City midfielder Darren Ambrose’s reputation has been shaped by over a decade in the top two divisions, with sensational goals perhaps the most stark of qualities to his game, and there is symmetry between the nature of his shots and the title to his latest initiation song.
The 28-year-old former Ipswich Town youngster spent four years in the Premier League with Newcastle United and Charlton Athletic before securing the affections of Crystal Palace supporters during a highly eventful stay at Selhurst Park. This summer brought a move to Championship promotion hopefuls Birmingham and around this time last year another Blues player, defender Curtis Davies, was on this site discussing his own fortunes when taking on the nerve-shredding challenge of singing in front of his teammates as a new player. When Darren took on the significant obstacle of the initiation procedure he called upon the signature track of an Irish singer, a fitting song title given the way he has hit the back of the net over the years.
“When I joined Birmingham we went to Austria for a pre-season tour. All the new signings had to sing when we were at a restaurant.
“I was a bit nervous before I sang but thought I better just get up there, I chose to sing ‘Cannonball’ by Damien Rice. It went better than I first thought it would and it didn’t last long, plus all the lads joined in.’’
Darren’s response to the first record he bought may not be one he purchased as such but it conjured up some memories all the same, with an East London band who enjoyed the bulk of their popularity in the mid to late-1960s coming into his thoughts.
“I never bought this but I remember my Dad and I used to listen to ‘Lazy Sunday’ by Small Faces when I was about 9 or 10 and I used to find it funny. I like all types of music to be honest, at the moment I would say my favourites are Damien Rice and Mumford & Sons.
“I also like Adele – I think she has an unbelievable voice. I’m not massively into dance music.’’
Having already discussed his own public vocal display, Darren recalled the efforts of one of his former teammates from a few seasons ago. The player in question is a London-born Ghanaian international striker playing out in Cyprus for AEL Limassol and he is a familiar name to Gillingham and Bristol Rovers fans thanks to his goals during temporary stints with each.
“At Charlton we had a player called Chris Dickson come in from Dulwich Hamlet and he had to sing on an away trip. He was extremely confident so all the lads were hoping he wouldn’t be the best so we could all banter him!
“It turned out he was the best singer we had all heard and in all honesty he could have won X Factor. He sang Michael Jackson’s ‘Leave Me Alone’ and it went down very well.’’

This season has seen Darren in the early throes of his stay at the fifth club of a career that kicked off in April 2002 with his appearance for Ipswich at Highbury in a 2-0 defeat to that season’s Premier League and FA Cup winners Arsenal. The Harlow-born midfielder was 18 at the time and that debut came in the Tractor Boys’ most recent campaign in the top flight. The following season saw him really establish himself as a key player for the Portman Road side under George Burley and latterly Joe Royle, with 11 goals as Ipswich missed out on the Division One play-offs by four points. Darren’s form had certainly caught the eye and the financial difficulties Ipswich had encountered left them with little resistance to offer when Newcastle United manager Sir Bobby Robson moved in to sign him from his old club in March 2003. 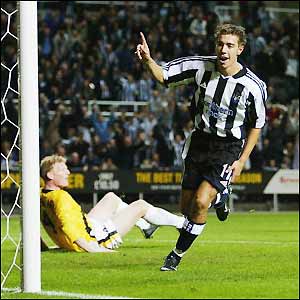 He would spend two full seasons on Tyneside, featuring regularly in 2003/04 as the Magpies were narrowly ousted from the final Champions League place by Liverpool. Graeme Souness took over as manager early on in the 2004/05 season and starts were harder to come by for Darren with Jermaine Jenas and Kieron Dyer playing the majority of games. That year did however include three league goals for him, with a strike at Bolton Wanderers’ Reebok Stadium one I vividly recall seeing on Sunday’s Match of the Day 2 at the time, before school the next morning! There was also one away at Fulham and previous to this a goal at Old Trafford to give Newcastle an early lead over Manchester United before Wayne Rooney’s thunderous volley stole the headlines. Darren moved to Charlton in the summer of 2005 and he was part of an Addicks team who finished 13th in the Premier League after an initially hugely impressive start to the season in what would ultimately be Alan Curbishley’s last in charge of the South Londoners. The next three seasons brought two relegations for Charlton and Darren had a loan spell back at his first club Ipswich in the latter of these. He moved to rivals Crystal Palace in July 2009 and it is most definitely fair to say that he would become a hero at Selhurst Park.
The 2009/10 season is one that Palace fans will never forget. In January 2010 the club went into administration and saw a play-off challenge swiftly become a fight for survival in the Championship following the mandatory ten-point deduction. Darren’s goalscoring form in the opening months was incredible but he saved his 20th of the campaign and most significant for the final day. The situation had Palace away to Sheffield Wednesday with the rules as follows: winner stays up, a draw and Palace survive. Speaking from the perspective of a Wednesday supporter I can say that the game was a truly one-off scenario, in front of over 37,000 at a sold-out Hillsborough the atmosphere was magnificent, but one team was to be devastated at the end and it was to be us. The game ended 2-2 with a late effort by Wednesday not enough for the precious three points and Darren had given Palace a 2-1 lead after 63 minutes. For the thousands of Palace fans who packed out the Leppings Lane end it was delirium and Darren recalls the May 2010 afternoon. 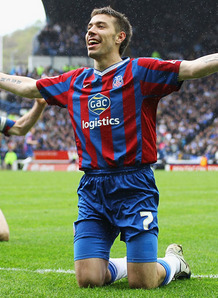 “The game at Hillsborough was built by both clubs as one of, if not the biggest in their club’s history but as players you have to treat it as another game. We knew we didn’t deserve to be in that position in the league in the first place (due to the 10-point deduction).
“The atmosphere from both sets of supporters was one of the best I have ever played in front of so it did get the butterflies in the belly. I must say though when Darren Purse equalised with a few minutes to go it felt like a lifetime before the final whistle.
“I felt for the Wednesday team as it’s not nice to be relegated but I just felt the right team stayed up that year.’’
On the subject of his crucial contribution that day, I asked Darren what his top three goals in his career so far would be and I predicted that he would place the strike at Hillsborough in third. I also thought he would put his stunning free-kick in Palace’s FA Cup fifth round (2010) draw with Aston Villa in second and that his number one would be his breathtaking 35-yarder in the Eagles’ Carling Cup quarter-final win over Manchester United at Old Trafford last season.
“Your prediction is close but not right. I would say in at three is the goal against Sheffield Wednesday for Palace, if it was the top three that meant the most this would be at number one.
“Number two would be for Newcastle against Bolton, a 30-yarder into the top corner. Number one is, you guessed it, against Man United at Old Trafford last season – I couldn’t have hit that one any better.’’
As it stands so far this season Birmingham are 17th in the Championship after 13 games but are only six points away from the play-off places at this relatively early stage. Lee Clark’s Blues came from 3-0 down away at Millwall last Tuesday to draw 3-3, and continuing with the music theme, the striker who scored a hat-trick has been in charge of the team’s playlist of late.
“Kingy (Marlon King) normally puts the tunes on in the changing rooms, it’s a good playlist with different genres for everyone to enjoy. I haven’t got enough songs on my iPod to get involved in that.’’
A 1-0 away victory against Leeds United last weekend thanks to Leroy Lita’s winner has buoyed the side and Darren looks ahead to the future while also assessing his own fortunes as a Blues player thus far.
“I have been satisfied with my start to my Blues career. I started well, scored on my debut and got three assists in my first five games.
“I picked up a knock and was out for three games then came the Barnsley game (a 5-0 defeat) which was one to forget for everyone involved. I haven’t played since which has been frustrating for me but we have a fantastic squad here so I have to be patient and when my time comes again I have to be ready.
“We have started to pick up some points and are getting some good results. This league is so tight that a few wins in a row can see you jump a long way up the league.
“We are all confident that we can get some good wins in the coming weeks and months.’’
A performer who many opposition supporters, players and managers have watched as he has served up a telling contribution against them over the past decade, Darren’s response to the site’s regular question of the best he has worked with was likely to be intriguing. This final part of the interviews on here requires the player to choose their 5-a-side team based on this, asking for the four best teammates they would select alongside them. Darren’s choices have a strong Ipswich and Charlton connection and the frontman he went for even managed to get in there ahead of Alan Shearer!
“Well I would definitely have Shay Given in goal, with Hermann Hreidarsson (in defence), no one will get past him on a small pitch. Myself in midfield with Jim Magilton who would keep things ticking, and I’d have Darren Bent up front to score all the goals.’’