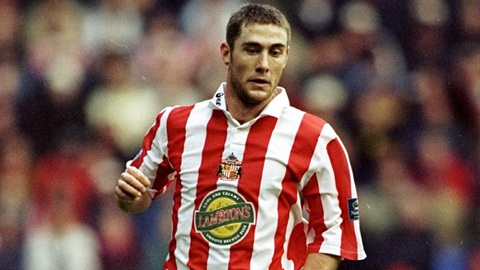 It is his days in the top flight with Sunderland and Ipswich Town that former defender Chris Makin is best remembered for but when it comes to the more unorthodox yet memorable moments there is one that is certainly worth a mention!
Among the high points of the one-time Marseille man’s career were European football with Ipswich and the First Division title with Peter Reid’s Sunderland. However, the music section of this interview brought to the forefront of his thoughts a memory from his days as a young player in his native North West that he just can’t seem to bury!
“I had to sing a Christmas song when I was an apprentice at Oldham to the whole of the first-team squad… naked on a table and holding a mop. ‘Rudolph the Red-Nosed Reindeer’ still sends a shudder through me when I hear it!’’
Aside from that Latics escapade there is a vintage edge to the artists Chris favours, with the New Yorker and ‘Sweet Caroline’ singer at the top of his list.
“I’ve always been a lover of soul music but as I get older my tastes change drastically. Now I love Neil Diamond – go figure! 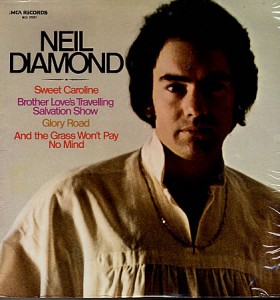 “I’m still into my 80s and 90s soul but I love singing along to a bit of Frank (Sinatra), Deano (Dean Martin), Elvis, Neil Diamond! The first record I bought was by The Police, I’m not sure but it might have been ‘Message In A Bottle’ and I was probably about 8 or 9.’’
There is some real variety in the array of acts Chris has seen perform in person and as a Manchester United fan born in Crumpsall there are a couple in there who originated not a million miles away from his neck of the woods.
“I’ve been to see Luther Vandross, Simply Red, M People, Robbie Williams. I’ve seen James Brown and Rose Royce perform live but my favourite concerts were Neil Diamond and Florence and the Machine at the M.E.N – both were different but fantastic!’’
Southampton were the ninth and final club Chris represented in the Football League before his retirement in 2008, prompted by injury that ensured his last professional game came in September 2007 in a Championship home fixture for the Saints against Colchester United. He did have a later spell with Radcliffe Borough but it was the penultimate club of his league career that brought his time playing alongside a teammate with particularly raucous and distinguished music taste. This was during Chris’ year with Steve Coppell’s Reading in which he featured 19 times in total as the Royals won promotion to the Premier League with a record points tally. The man he speaks of with regard to his choice of tunes has been mentioned on here in interviews with some of his past teammates and Chris is no different to them in his opinion of the American goalkeeper’s music!
“Marcus (Hahnemann) was a nightmare! He used to listen to Slipknot, a heavy metal band I think!

“For some reason he thought I would like them and would randomly put his headphones on me and ask me my opinion. He just didn’t seem to take the hint every time I said it wasn’t my kind of music!’’
At clubs today there are usually at least one or two players who stamp their authority on the pre-match music in the changing room but it appears it was slightly more democratic at the teams Chris turned out for. Nevertheless, there was one who stood out in that respect and it was an English-Italian frontman who won the Division One championship with Chris in 1999.
“The closest anyone ever came to being in charge of the music at a club was Danny Dichio at Sunderland, although he was a DJ! I did used to love music before a game though, the right track would get you going.
“As for me stepping in, I was too busy concentrating on the game!’’
Perhaps surprisingly, given the earlier story Chris referenced from his days at Oldham, he managed to dodge the initiation ritual of singing in front of his teammates as a new player, though one of Neil Diamond’s hugely known songs would have been his choice.
“A lot of clubs have initiation ceremonies to welcome new players. It sounds good fun, luckily I’ve never had to do it.
“I think a bit of ‘Sweet Caroline’ would have got me through though!’’
Sunderland was the club Chris enjoyed the most success at, joining in 1997 and spending the best part of four years on Wearside under the management of Peter Reid. His uncompromising tackles and forays forward from right-back before his customary shot on goal led to him striking up a bond with the supporters at the Stadium of Light as part of the ground’s opening four seasons. In that time there was Wembley heartbreak in that truly classic 1998 Division One play-off final with Charlton, followed by elation as the side bounced back to win the league with a huge 105 points a year later. There were also derby victories over Newcastle and the first season back in the top flight in which the Black Cats finished 7th, level on points with Aston Villa in 6th place. That campaign also included Chris’ favourite game at the club as they hammered Chelsea 4-1 at home in December 1999 with the goal everyone remembers from Kevin Phillips – a stunning half-volley past Ed de Goey.
Chris departed the Stadium of Light in March 2001 for fellow Premier League highflyers Ipswich but the club and the people left an eternal impression on him.
“I fell in love with the fans because they are so passionate. We also had a good team so that made it easier to bond with the fans.
“It was a new stadium, a new team and we just took off – a special time indeed!’’ 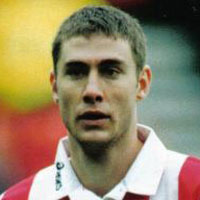 He had actually arrived as a Sunderland player via one of the most recognisable names in European football – the 1993 Champions League winners Marseille. There are not many players who can say they left Oldham and joined the French giants and although the club finished 11th in Ligue 1 during his solitary season he received invaluable experience. Considering his path from England’s North West to the south of France I wondered how well his accent allowed him to take on the linguistic challenge when he made the move abroad!
“I ended up going to Marseille on a Bosman, one of the first ones. It was my first experience of playing for a big club, they had won the European Cup three years before so expectations were still high and you had to win every game or it was as if the world had ended.
“I had to change my mentality. The fans there are incredible, amongst the best in Europe, so passionate.
“As for my accent, I found as long as I tried to speak French they appreciated it!’’
Following his time in French football and all those wonderful experiences at Sunderland, Chris went on to spend over three years with Ipswich. His move came in March 2001 which allowed him to play 10 times as George Burley’s side pulled off the magnificent achievement of qualifying for Europe just a year after winning the Division One play-offs.
“I had a wonderful time at Ipswich, managing to finish in 5th and qualify for Europe. The best memories were of winning in Europe, especially at home against Inter Milan and away in Moscow and Helsingborgs – top performances followed by top celebrations!
“Even though we had murders on the pitch, me and Jim Magilton still work together here in Qatar and remain good friends!’’
Ipswich could not follow up their excellent first season back in the top flight and were relegated in 2002 and have yet to return to English football’s top table. Chris’ final season at Portman Road in 2003/04 was ravaged by injury but the team did make it to the Division One play-off semi-final. He went on to stay in the second tier, representing Leicester City and also Derby County on loan en route to their Championship play-off campaign in 2005. The 2005/06 season saw him win the Championship title with Reading as the team set a record with 106 points. Two seasons with Southampton rounded off a professional career in which Chris consistently competed at a high level and he has since played a part in business while maintaining his love for football, recently taking it to exciting surroundings with two former colleagues.
“Since retiring from football I’ve managed my properties that I invested in whilst still playing. I’ve done a bit of media work and also Q and As, which are good fun. 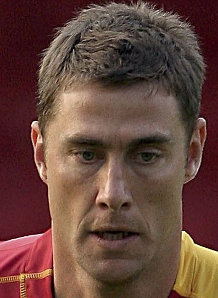 “Recently I’ve just moved out to Doha to work on the Qatari league with Jim Magilton, Nicky Summerbee and our presenter Rhodri Williams. It’s for a new TV station called Al-Kass so hopefully this could be the start of something special.’’
Wrapping proceedings up in usual style on here, Chris chose the 5-a-side line-up of the best players he has ever worked with (including himself as a prerequisite of the question). There are two players who featured for England in there as well as a goalkeeper who English supporters may well remember from Euro 96 and a certain save from Gareth Southgate. After he chose his team I asked Chris where his good friends and former Sunderland teammates Nicky Summerbee and Michael Gray would feature, and they may take some solace from Chris deciding that they would go on the bench for this team!
“OK here goes my 5-a-side team – Andreas Köpke in goal, my goalkeeper at Marseille and former Germany international. Me at left side and obviously captain!
“Steve Bould to my right – my former colleague at Sunderland. In midfield – former captain of Marseille and French international Jean-Philippe Durand.
“Up front – my old teammate and England international Kevin Phillips. How’s that? Unbeatable!’’