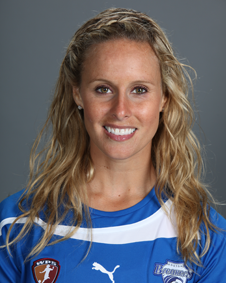 Boston Breakers are enjoying a flawless start to the WPSL Elite League campaign, led by their captain, central midfielder and 61-cap USA international Leslie Osborne, who speaks of the lasting impact England international duo Alex Scott and Kelly Smith had before their return home this season.

In previous interviews on here, one with USA’s Carli Lloyd, one with England’s Claire Rafferty, two of their teammates were cited as being in charge of the respective national teams’ pre-game playlists, and as the two in question were Leslie’s Boston teammates for some time too she has been yearning for their song choices now they have moved on!

“(We’re) missing our DJs Lauren Cheney and Alex Scott – their taste was great and right up my alley, a lot of Nicki Minaj, Rihanna and fun songs. (Before games/training) I’m not big into the slow music, it doesn’t really get me going, also not into the 80s music.”

As a naturally driven individual, as well as someone who has fought back from serious injury in the past and been a key competitor at a World Cup, Leslie names the contemporary tunes currently helping her along in workouts and also preparations on game day.

“I usually like fast and upbeat songs to prepare for games. Flo Rida ‘Whistle’, Nicki Minaj ‘Marilyn Monroe’, Flo Rida ‘Wild Ones’, Justin Bieber ‘Boyfriend’, Gotye ‘Somebody That I Used To Know’.

“I love music, especially before my games, I like a variety, I don’t really dislike anything. I like hip-hop, rock and country before games, Black Eyed Peas, Flo Rida, Rihanna, Nicki Minaj, Taylor Swift and Rascal Flatts.”

On the subject of concerts and gigs, the American / English theme from the beginning of the article continues, with one of each in that respect!

“When I was younger Dave Matthews Band concerts were always great. Recently, I loved Coldplay back in California last year.”

It was touched upon previously how Leslie enjoyed defender Alex Scott’s music choices while they were together as teammates, and Leslie feels a great degree of admiration for both her and fellow England international Kelly Smith.

“I miss Alex and Kelly, Alex loved Rihanna and Nicki Minaj – we had very similar taste! She was great and in charge of the pre-game music, she is missed in a lot of ways.”

Growing up in Brookfield, Wisconsin, Leslie won the state championships in both her sophomore and senior year at Catholic Memorial High School in Waukesha, with the school retiring her number 10 jersey in her honour in 2004 after her 97 goals and 79 assists.

At Santa Clara University, California, as a senior she was honoured as the country’s top female soccer player with the NCAA’s Honda Award, winning a number of other individual accolades as well as being part of the Broncos team that won the national championship in her freshman year.

Having played for the US team at numerous levels since the age of 14 Leslie won the Under-19 World Championship in 2002 and made her first appearance for the senior team in January 2004 against Sweden.

A finalist in 2006 for the US Soccer Athlete of the Year, she would be a regular part of the World Cup squad in China in 2007 as the US came in third place, although injury would deny her the opportunity to play in the 2008 Olympic Games in Beijing.

Having represented the California-based FC Gold Pride in the first season of the Women’s Professional Soccer division in 2009 she would join up with her current team, Boston Breakers, in October of that year. 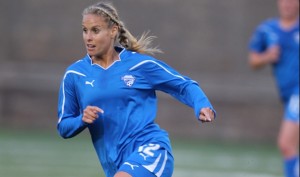 Having initially shared captaining duties with a legend of the female game, and another past interviewee on this site, Kristine Lilly, Leslie would assume the role permanently and still holds the responsibility today.

The aforementioned departures of top Breakers players Alex Scott and Kelly Smith followed the suspension of Women’s Professional Soccer in the US in January, and this month has now seen the league fold after three seasons having initially intended to return next year.

There is no doubt that the news is a significant blow to the female game in the States but Leslie rightfully maintains focused optimism, evidenced by her response to my question of whether it could ultimately prove merely a temporary blip in the grand scheme of women’s soccer.

“I hope so – I hope to help get a professional league back in our country. I feel a responsibility and passion, I know other players do too, it’s time we come together with the MLS, US Soccer, W-League and WPS to make it happen.

“Women’s soccer in the US is a priority, so let’s make it that way on the professional level.”

Boston Breakers are the nation’s longest-running professional women’s soccer team having come together in 2001, and now after the demise of the WPS they are competing in the eight-team WPSL Elite League.

The team have made a perfect start to the season with four wins from their first four games, including the latest, a 3-2 home victory at Dilboy Stadium over a team they have faced before when they were together in the WPS, that division’s 2011 champions Western New York Flash.

The outlook is more than bright for the Breakers, and Leslie, having played every minute so far, sees a lot of good in the current situation, though it is not difficult to see just how important Alex Scott and Kelly Smith were to her and the team when you consider the strength of feeling Leslie conveys here.

“I think we have a great opportunity in front of us, we have a younger, but also good squad. We are missing Kelly and Alex who have been a huge part to this team and what I have ever known being a Boston Breaker.

“The US Women’s National Team players were in and out a lot, so their presence is missed, but not as much as Kelly and Alex. We have young talent and great girls who work hard and have potential, these players just need an opportunity to get more games, coaching and overall experience.

“I like our team – good pieces to the puzzle.”

Leslie was called up for the US team’s World Cup qualifier with Italy in November 2010 but has been out of the international picture in recent times, though having only just turned 29 this week is that door still open for her?

“Who knows? I will always be ready if I have another opportunity, my best memories are playing with my childhood idols and now them being my good friends and mentors in life – Brandi Chastain and Kristine Lilly.

“I learned so much from playing with them and I’m hoping to pass on what I learned to the younger generations. There is nothing like wearing a US jersey for the national anthem, I loved representing my country, we will see what happens in the future.”

An avid traveller and follower of the fashion world, Leslie who has coached at collegiate and club level spends a considerable amount of time running her own soccer camps around the country and supporting similar initiatives in an exemplary manner.

Her numerous ventures may also be bringing her to England over the summer and she fervently hopes that the US team will be celebrating Olympic soccer success for a third consecutive occasion after winning Gold previously in Athens and Beijing.

“I think they will do great, their mentality is so special, teams try and get what we have, it’s hard. I was in London in January and loved it, I saw some games and visited my friends!

“I might be coming to London for TV, I will keep you updated. I will find out soon.”