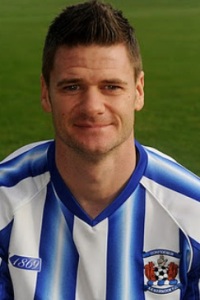 Centre-back Michael Nelson has endeared himself to supporters in his career with telling contributions in the promotions of Norwich City and Hartlepool United, as well as Kilmarnock’s Scottish League Cup success this year, and he also gave a performance of Maverick (and Goose) proportions away from the field last year.

The ex-Bury stopper and North East native moved to the SPL in January from Scunthorpe United, getting the chance to feature twice at Hampden for Kenny Shiels’ Kilmarnock side as they dispatched of Ayr United in the semi-final before beating league champions Celtic in the League Cup final in March.

Dominant rearguard displays on the pitch have long been a feature of the 32-year-old’s career but in 2011 he chose The Righteous Brothers’ famous song, and favourite from Tom Cruise’s 1986 film Top Gun, to see him through the initiation procedure new players at clubs generally have to go through.

“I sang ‘You’ve Lost That Lovin’ Feelin” from Top Gun when I signed for Scunthorpe – they loved it. It was in the restaurant at a hotel in Bristol, the nerves weren’t too bad, it’s just one of those things you have to do.

“At Kilmarnock I sang Ben E. King ‘Stand By Me’ – it went down a treat as well.”

Discussing the musical offerings of a selection of Michael’s past teammates brings up something the first name he mentions told me about last December, and it appears the ex-Scunthorpe loanee in question wasn’t lying when he talked up his vocal ability!

“Lee Miller sang a Ronan Keating song, but I can’t remember which one, and he was brilliant. Marc Tierney sang MC Hammer ‘U Can’t Touch This’ when he signed for Norwich, and Russell Martin and Andrew Crofts did a duet of ‘Don’t Stop Believin” (Journey), the Glee version, and it was very good.”

Norwich City manager Paul Lambert has enjoyed monumental success in less than three years in charge of the Canaries, taking the Carrow Road side from League One to safety in the Premier League and he helped Michael in his move to Kilmarnock by offering a glowing reference to the defender’s new employers.

Lambert, a Champions League winner with Borussia Dortmund in his midfield playing days and a resounding managerial talent so far, also got involved with pre-game preparations in a less orthodox way when Michael was at the Norfolk club!

“At Norwich one season the gaffer would always have The Black Eyed Peas ‘I Gotta Feeling’ on.”

At current side Kilmarnock the choice of nationalities in the first-team squad at Rugby Park makes for a soundtrack perhaps not the most obviously befitting of the Ayrshire surroundings.

“Some of the foreign boys, Willie Gros, David Silva and Momo Sissoko (previously on loan from Udinese) like a bit of French hip-hop or a bit of Portuguese music. Most of the other boys are a mix between r&b and hip-hop and a bit of dance.

“Motivational music – just always something upbeat as we are about to go out. I like most music to be fair, at the minute I’m liking a bit of Jay-Z and Kanye, I don’t really have a favourite album, I’m constantly mixing it up.”

Although the first record he ever bought was difficult to recall for Michael, he did allude to his prominent ex-Hartlepool colleague, and someone who former Pools striker Joel Porter also mentioned on here in January.

“Ritchie Humphreys was well into his bands, he knows a couple of the Arctic Monkeys and the Reverend, Jon, from Reverend and the Makers. He was always at gigs and he also liked to do the changing room playlist.”

Having turned out for Leek Town, Spennymoor United and Bishop Auckland, he impressed the watching admirers sufficiently for Bury player-manager Andy Preece to bring him into the Football League in 2001.

“I’m not sure who had seen me but somebody had watched me playing for Bishop Auckland. Andy Preece came to watch and I was invited for a trial.”

Michael’s debut for the Shakers as a 21-year-old in April 2001 brought him a goal as he scored in a 1-1 home draw with Wycombe Wanderers in the Second Division (now League One) and he emerged as a regular the following year in what was unfortunately a relegation campaign.

The 2002/03 season however saw his progress earn him the praise of his manager who described him as the best central defender in the division, and his five goals also contributed significantly to Bury taking the last play-off place with 70 points, just one ahead of Oxford United in 8th.

“He (Preece) was good – you can never really complain about a manager when he plays you nearly every week.”

Despite missing out on promotion back to the third tier after losing to eventual play-off winners Bournemouth in the semi-final, Michael won a raft of individual awards before his summer 2003 move to Hartlepool and it was an undeniably enjoyable learning curve for a young player.

“It was my first club as a pro so it was exciting, getting to the play-offs was a great experience even though we got beat. David Nugent was breaking through at the time and you could see he had a good future ahead of him.

“Jason Jarrett also had a good season and got a move to Wigan. I had a really good friendship with Matt Barrass, Martyn Forrest and Danny Swailes.”

After departing Greater Manchester his time at Hartlepool would see him notch 16 goals in a six-year spell that brought over 300 appearances in all, as well as a relegation and a promotion. 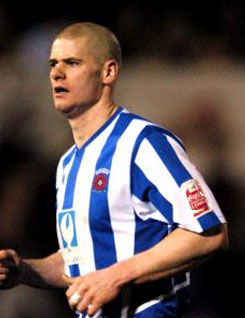 In 2009, Norwich boss Bryan Gunn secured his services but would leave in the aftermath of a disastrous opening League One game which saw Colchester United triumph 7-1 at Carrow Road.

The visitors’ manager that day was ex-Celtic midfielder Paul Lambert and he would soon take over the team he had defeated so convincingly and would guide them to the title that season, before winning promotion again the following year to take the Canaries into the Premier League.

A frequent scorer from the back in his career, Michael’s most memorable goals include some particularly crucial ones in Norwich’s League One title triumph. 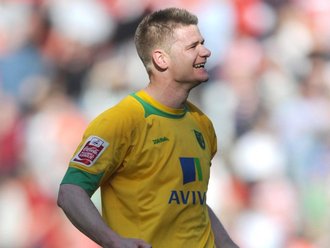 “I scored on my debut for both Bury and Hartlepool so they were special ones, the one for Hartlepool was the fourth in a 4-3 victory as well (away at Peterborough United in August 2003). I scored my first goal for Norwich away to Hartlepool and it was an overhead kick which was nice.

“The one that stands out though is the goal at The Valley against Charlton to get Norwich promoted to the Championship in a 1-0 victory (in April 2010). I scored in a 2-0 victory against Gillingham as well the following week in the game which won us the league.”

He netted two Championship goals in nine games in 2010 before joining Scunthorpe in January of last year, and his input at Carrow Road had been such that he featured in club stalwart Adam Drury’s testimonial against Celtic earlier this week.

“It was brilliant and well deserved for someone who has had 11 years at the club. It was really good to go back to Carrow Road and to get such a nice reception from the fans.”

Scunthorpe suffered relegation from the Championship in 2011 and failed to mount a promotion challenge in League One in 2011/12 and Michael, as mentioned previously, ultimately ventured north to Kilmarnock.

Despite League Cup success Killie came 7th in the SPL with teams tending to arrest their bad form against them, and Michael, who has acclimatised to the style of play and who scored his first for the club in a 4-3 win over Inverness, has signalled the need for that often-used buzz word.

“We just need to be a bit more consistent. We have some good young players coming through so hopefully they can make the step up and help.

“We used to play quite similar at Norwich in terms of passing it out from the back but Kilmarnock is possibly the most passing football I’ve played.”

The fantasy 5-a-side team he would choose, comprising of the best players he has ever worked with (including himself as a prerequisite), contains a very strong influence from his Norwich days with the first three he names, as well as the last being the consummate example and club record appearance maker who has just extended his contract at Hartlepool into a 12th year.

“Fraser Forster as a keeper, simply the best I’ve played in front of. Grant Holt for his goals, he is a quality player.