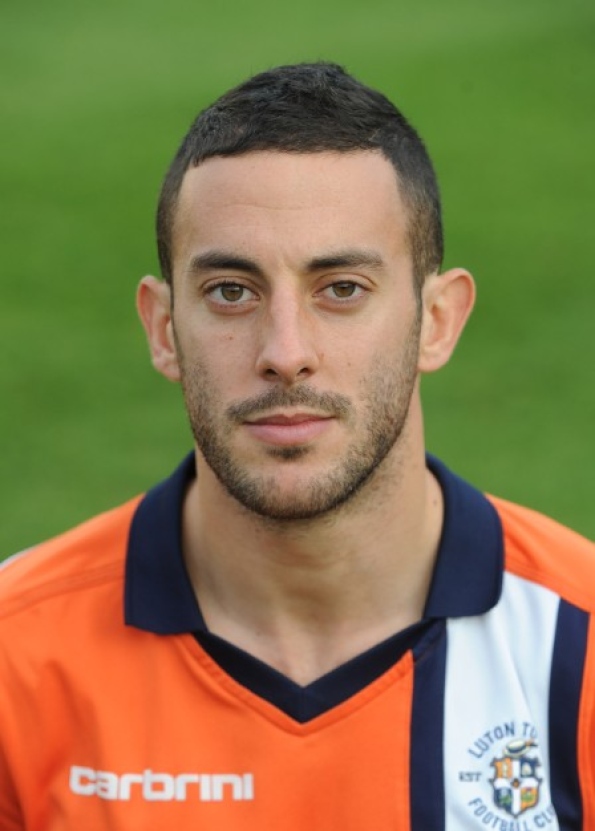 A two-year stay at Luton Town may have come to an end for striker Stuart Fleetwood but it gave the former Hereford United hero plenty to savour, with the odd international tune selection to resonate in his mind!

Having enjoyed a successful second spell with Hereford, scoring 18 goals as the club ensured League Two safety in 2011, the former Welsh Under-21 international made the decision to drop down to the Conference with Luton Town. Making the switch to the Hatters in the opening stages of the 2011/12 season, the 27-year-old played 88 times scoring 27 goals for the Kenilworth Road side before manager John Still announced in April he had decided not to renew his contract, along with Scott Neilson, James Dance, Alasan Ann and János Kovács. Former Dagenham & Redbridge boss Still had replaced Paul Buckle at Luton in February and had not had the opportunity to see Stuart in full flow, with a hernia operation ending his season in March. One of the lasting memories of his time with the club was provided by the aforementioned Kovács, a Hungarian defender who was also with Stuart at Hereford.

“It’s mostly the foreign lads who have the worst taste in music. János Kovács loves his Euro pop / hardcore stuff that just sounds like a headache – very trippy!’’

The ex-Chesterfield and Lincoln City centre-back Kovács is also a distinguished individual when it comes to his choice of attire and he was a starter in Luton’s play-off final defeat to York City at Wembley last May in front of 39,265. Despite the 2-1 result, playing at such a venue ranks as the standout moment for Stuart as a Hatter and he explains what he’ll miss now he has departed.

“I lived in Milton Keynes whilst at Luton and it’s a nice place, a little annoying with a roundabout every ten seconds though. My fondest memory is playing at Wembley in the play-off final, unfortunately losing but an amazing achievement.
“I’ll miss friends like Dean Brill, Alex Lawless and Greg Taylor from Luton but I got on with everyone and it’s a good bunch of lads.’’

Stuart, who spent some time on the left wing while with Luton, played under three full-time managers in two seasons at the club – Gary Brabin, Paul Buckle and latterly John Still. It was a 5th-place finish in the Conference in his first campaign in South Bedfordshire and he struck in the 2-0 play-off semi-final win at home to Wrexham. This year, the 1988 League Cup winners fell short in the league, coming in 7th, 13 points from the play-off places. There was however a run to the FA Cup fifth round where they met eventual semi-finalists Millwall, losing 3-0 at home to the second-tier side. Premier League Norwich City and Championship Wolverhampton Wanderers had been seen off in the previous rounds and Stuart sets the scene in terms of the pre-match musical encouragement chosen for such games.

“Before a game I need something loud and high-tempo to raise my mood and get my heart racing a bit! My favourite artists are very varied, including Ed Sheeran, Bruno Mars, Queen, N*E*R*D, Stereophonics and Drake.
“A very wide range of genres – I like my rock, pop, r&b, depending on what mood I’m in. Andre Gray was in charge of the music at Luton and when I was at Forest Green it used to be my iPod but now I’m over 26 I don’t get a look in.’’

An ex-Cardiff City youngster who made his professional debut in August 2003 in a 4-1 Carling Cup home victory over Leyton Orient, Stuart had an Irish defender and club colleague to join him in an on-stage performance while at Luton. It was a Supporters of Luton Youth Development event that provided the opportunity for him to put his vocal resolve to the test and he believes it was a rendition delivered with precision!

“I’ve sung a few times in front of the lads. A few initiations but I’ve also done a song on stage for charity with Freddie Murray playing guitar.
“I sang Kings Of Leon ‘Use Somebody’ and it went down well to be fair.’’

Stuart played alongside the likes of Sunderland midfielder David Vaughan and Celtic’s Joe Ledley while with Wales at Under-21 level but it was a teammate at an earlier stage internationally who switched his focus to a different dream after departing his club.

“I’ve seen a few dodgy initiation songs in my career but I used to play with a lad for Wales Under-17s called Russell Lucas. His voice was amazing and after being released by Reading he actually became a recording artist.’’

A West Ham United fan growing up, with the club’s talismanic Italian forward Paolo Di Canio his favourite player, Stuart was also a fan of a band headed by singer Jay Kay, known almost as much for his love of cars and headgear as he is for the music!

“My first CD I bought was Jamiroquai ‘Virtual Insanity’. Loved his (Jay Kay’s) music and wacky style and I remember being about 10 years old.’’

After he left first club Cardiff in early 2006, Stuart went on to help Hereford to promotion to the Football League after the club had spent nine years in non-league football. The anguish of losing league status in May 1997 against Brighton & Hove Albion was washed away for the Bulls as manager, chairman and majority shareholder, and current Shrewsbury Town boss, Graham Turner led them into League Two following a 3-2 play-off final victory over Halifax Town at Leicester City’s Walkers Stadium (as it was then known). Stuart entered the action after 94 minutes for the late and lamented Adam Stansfield and he stayed with the team the following season, also going on loan to fellow League Two side Accrington Stanley.

It would be in his second stint with Hereford that Stuart would really catch fire in front of goal though, as his Player of the Year campaign of 2010/11 helped to ensure the club would seal survival in League Two. Stuart’s 18 goals that season included a match-winning double at Oxford, pivotal braces against Northampton Town and Lincoln City, and one that Bulls fans will always remember – a dramatic 87th-minute equaliser against Bradford at Edgar Street to assure safety with a game to spare. 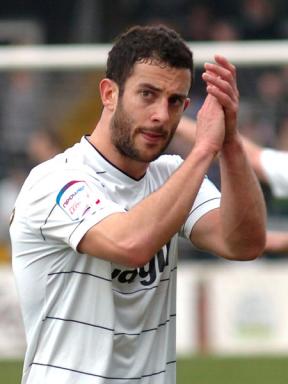 Stuart also enjoyed a terrific time in front of goal while with Forest Green Rovers of the Conference in 2007/08. He struck 36 goals in 50 games that year and in the midst of his form he turned down the opportunity to join League One Crewe Alexandra, choosing instead to stick with the club who had handed him an opportunity the previous summer. As it transpired, Stuart signed for Charlton Athletic, then of the Championship, in 2008 but he has the best of feelings from both Forest Green and Hereford looking back.

“My time at Forest Green Rovers was a great season and my most prolific. A grounded bunch of players who could really play.
“My two spells at Hereford were equally as good, being promoted from the Conference and finishing (the club’s) top goalscorer in League Two also. I speak to players from both clubs and have very fond memories.’’

Despite a Carling Cup appearance, ironically against Hereford, Stuart’s game time while with Charlton came in loan spells with Cheltenham Town, Brighton and Exeter City. His next two clubs were of course Hereford once more and Luton and during these two periods he had a chance to hone some separate skills in an area he has a strong intrigue for.

“I’m interested in travelling a lot, so getting away for a few days is a must during my time off. I love the journalism side of football also and I’ve written blogs for both Luton and Hereford’s websites.
“It’s something I’d like to do after football.’’

As he gears his focus towards some relaxation before stepping up his preparation for the new campaign this summer, Stuart does not yet know which shirt he will be pulling on just ahead of the first whistle of the 2013/14 season. He explains how the break is likely to play out for him, with family understandably playing a considerable part.

“A footballer’s summer goes very quickly and personally I get really bored! I’m constantly in the gym and I try to get away on a couple of holidays. 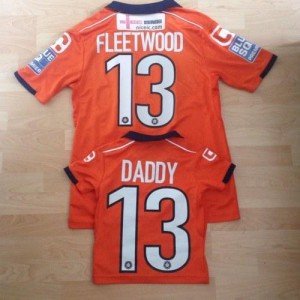 “My little girl keeps me busy though so not too much time to chill out. I’ve found staying in shape easy because I work hard in the off-season, I would hate to struggle through pre-season but everyone is different.’’

When coming up with his choice of four career teammates to go alongside him in a 5-a-side line-up, Stuart opted for three players from his Charlton days and a defender from his early career at Cardiff City. Each of these players has featured in the top flight at some point, with three of them set to be there next season as things stand. His choice of strike partner is a Bulgarian who was beset by injuries in his time in England but Portsmouth fans got to see the best of him with his 26 league goals as they won promotion to the Premier League in 2003. At 34, he was most recently with Ukrainian side Hoverla and Stuart is confident that a link-up with the ex-West Ham man would serve him well in this team!

“Goalkeeper and best friend in football – Rob Elliot of Newcastle. A great lad and godfather to my daughter, terrific keeper and 25 Premiership and European appearances this season is a great achievement.
“In defence I’d choose Danny Gabbidon of Crystal Palace. Quickest defender I’ve seen and great on the ball, perfect for 5-a-side.
“In midfield, Jonjo Shelvey of Liverpool. A fantastic player and an England performer for years to come, quality on the ball and can run all day.
“Up front with myself I’d choose Svetoslav Todorov. He could play just behind me and feed me service.
“He didn’t run a lot but his feet and quality were like nothing I’ve seen. The Berbatov of his era!’’