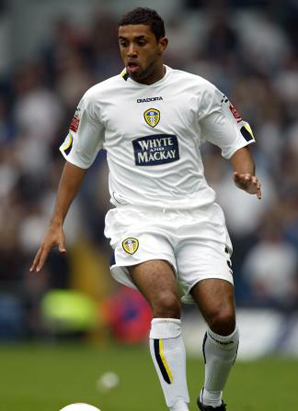 Making his way up from the youth team in Leeds United’s Premier League days, attacking midfielder Simon Johnson witnessed an interesting mix of music favoured by some of his big name teammates.

Signing his first professional deal with the Yorkshire club in 2000, Simon impressed in the reserves and was rewarded with his first taste of action at the top level in their 6-1 victory at Charlton in April 2003, Peter Reid’s first game in charge.

His time on the periphery of the first team at Elland Road coincided with the club’s big spending and European adventures, as well as their extremely well-documented demise.

“To be fair the boys used to share the music time. You had Rio and Dubes (Michael Duberry) that were more urban and then the likes of Gary Kelly and Ian Harte that enjoyed the Irish anthems!

“Smithy and Viduka were more into chilled music, I’m sure Smudge (Alan Smith) liked Dido, that sort of thing. I can’t remember Bowyer having good taste in music.”

Born in West Bromwich in 1983, Simon has always been a fan of the urban vibes when it comes to music and his first ever record bought was a compilation featuring some of hip-hop’s biggest performers.

“The first one I bought was ‘Rap Attack’ when I was roughly 11-years-old. My favourite r&b artists are Usher and Drake and I’m into slow jams, Jagged Edge, Aaliyah, Mary J. Blige and Jodeci.

“I really like Adele also, as well as Beyonce and Jay-Z.”

He moved on from the Quakers in 2007 after scoring 9 league goals in his two seasons in the North East, signing for Hereford United.

Promotion to League One was achieved in his first campaign with Hereford with Simon playing regularly in the latter half of the season.

The last Football League club for the former England-Under-20 international was Bury in 2009 before spells with various clubs in non-league.

Simon has since turned his hand to events management in his native Midlands and is experiencing a successful time at present.

“At the moment I currently run an urban event in Birmingham called Rewind. It is regarded as one of the top events in Birmingham at the moment which is pleasing as I never expected it to reach the stage it’s at.

“It’s an event which is non-moody with a really cool clientelle. We have a really unique following for an urban entertainment event.”

“There are actually a few people that are doing well with music in and around the Birmingham area. There are too many to name but a few I know of are Curfew, Miles M Davies featuring Noel Mac, Skarlet and Young Era, also two girls, Chloe Lewis and Shireen Cole.

“I had a mate in the youth team called Chris Kamara (not the former footballer/manager and Sky Sports pundit) who really thought he had what it takes to be the next Usher. A black version of one of them Jedward twins would have been more achievable.”

After slipping away from the professional game Simon has found another area to focus his energy on and he has differing emotions when giving his view of his time in football.

“Being at Leeds was a big part of my life and I would never change any of my experience. It was every boy’s dream and I lived it so I can’t have any complaints.

“At those times I was really close to all the boys in the youth team with me like Jamie McMaster, Frazer Richardson, Matt Kilgallon, Aaron Lennon and from other clubs, Jermaine Jenas and Pennant.

“Football I don’t take quite so serious anymore. I still love the sport for what it is but as years have gone by I have realised that genuine people in football are very few and far between.

“I just want to state that this is in no way bitter towards the way my career went because I certainly didn’t help myself in some situations. However, managers and people that have power in football can’t be trusted and it disgusts me that they continuously get away with the things they do.

“I’ll write a book one day and expose them all!”

Some of Simon’s favourite songs:

Faith Evans – You Used To Love Me