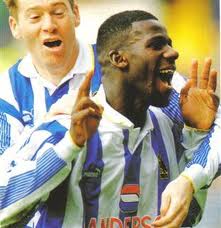 In his playing days Chris Bart-Williams was part of an era for Sheffield Wednesday which fans still remember very fondly, although his musical taste didn’t quite have such pride of place in the dressing room at Hillsborough.

Born in Sierra Leone’s capital Freetown in 1974, Chris moved to London at the age of four and by sixteen was playing for Leyton Orient’s first team.

It was while with Trevor Francis’ Owls side that Chris played alongside some of English football’s big names, making considerable strides in his early career, although his choice of music never quite made it to the pre-match playlist!

“The music I liked was not permitted to be played in the dressing room as I liked to listen to hip-hop, reggae and soul in those days. Hence why the team nickname for me was ‘Shabby Ranks’ (in reference to Jamaican dancehall artist Shabba Ranks), though I think it was more for my challenging looks than talent.

“At the time I thought Viv Anderson had poor taste, however as I matured I realised he simply had eclectic taste in music!”

“The music I like now depends on the mood I’m in, soul, hip-hop, jazz, pop, r&b, classical. The first record I bought was Michael Jackson’s ‘Beat It’ when I was 17.

“Some of my favourite gigs I’ve been to include Diana Ross, Shirley Bassey, Michael Jackson, Janet Jackson and Coldplay, as well as the MTV Awards and the Q Awards.”

In his first season at Wednesday, the club finished third in the old First Division which would of course become the Premier League the following year.

Chris experienced a Wembley FA Cup final in May 1993, twice in fact, coming on as an extra-time substitute in both the original final against Arsenal and in the replay five days later with The Owls losing 2-1 to a 119th-minute Andy Linighan winner.

As galling as that was to take for Wednesday players and fans alike, the experience was still extremely special for Chris, especially as a young man still a few weeks shy of his 19th birthday.

“It was simply a dream come true. Like all fans watching the cup final each year as a young boy you dream of the moment you step out onto the Wembley field, just a phenomenal experience.

“It was an extremely special time of my life and development as a football player. I feel very lucky and proud and it was an honour to have been part of such a special time in the club’s history.”

Chris moved to Nottingham Forest for £2.5million in 1995 and it was a teammate and Dutch international from his spell at The City Ground whose taste in music he remembers most vividly.

“That’s easy, Bryan Roy at Nottingham Forest. I can’t tell you what type of music it was but still it certainly made him happy!”

After time spent with Charlton Athletic and Ipswich Town, Chris left the English game in September 2004 to join APOEL FC in Nicosia, Cyprus.

He also played in Malta for Marsaxlokk FC in the 2005/06 season and speaks very positively about his time in both countries.

“The standard of football was very high in Cyprus and Malta, yet the lifestyle can be a challenging experience for a British player. It was very laid-back off the field, allowing for quality life and time away from football.

“On the field it was fiercely competitive and naturally you have to adapt to the different mentalities and cultures. I loved it.”

Fast forward to the present day and Chris has taken the experiences he garnered during his playing career to America.

“People told me that I was always a boss’s player, yelling at everyone. It sounded like coaching would be the ideal venture to fit in.

“I’m currently a coach at the very credible Quinnipiac University, a US soccer academy team, plus I’m involved in other different levels of US soccer. Truly I have learnt so much coaching in different countries, working with various coaches and organisations can only make me a better person and coach.”

After his contract with Joe Royle’s Ipswich ended in the summer of 2004, Chris at the age of 30 was linked in the media with a move back to Sheffield Wednesday, almost a decade after leaving the club he scored 24 goals in 156 games for.

“Sadly I never heard of this report, no-one from Wednesday has ever contacted me regarding this matter. I definitely would have considered going back.”

With 505 appearances in all competitions in English football to his name, including nine seasons at the top level with Wednesday, Forest and Charlton, does Chris regret anything?

“Absolutely nothing. To have regrets about the career and path God gave me would be disrespectful.”

The man nicknamed ‘Bartman’ by some in his spell with Wednesday still holds the club who gave him his chance in the top league and its supporters in the highest regard.

“I have many special memories and still my debut against Arsenal at Hillsborough is a favourite. Wednesday fans were very kind and generous to me during my youth.” 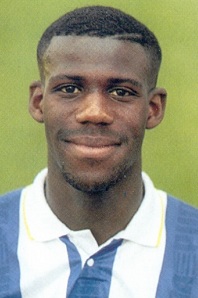 Some of Chris’s favourite songs: