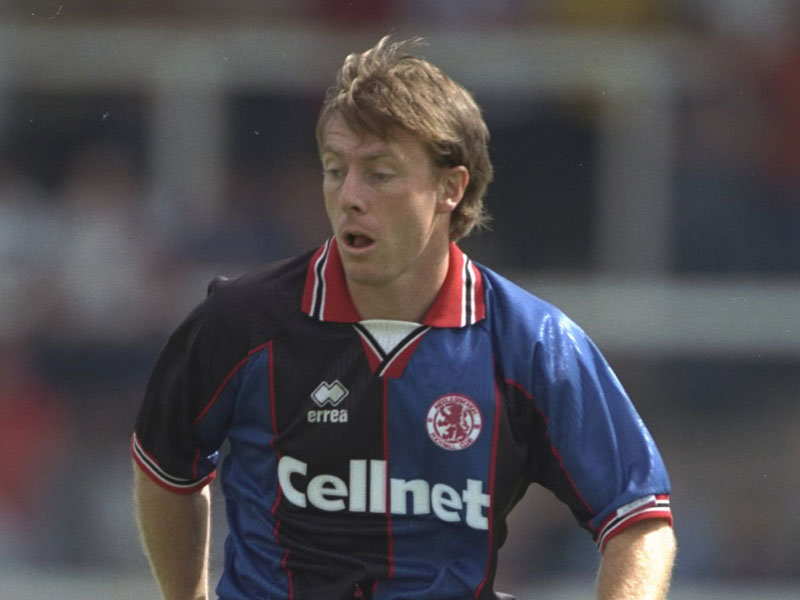 Former Middlesbrough keeper Ben Roberts spoke recently on this blog about his love for the music Brazilian duo Juninho and Emerson brought to Teesside, but the South American beats weren’t such a favourite for former teammate and Merseysider Craig Hignett.

A former midfielder and striker, Craig, now 41, spent six years with Boro after signing from Crewe Alexandra in 1992, writing his name into the record books during this time by scoring the first ever goal at the Riverside Stadium in 1995.
Although the high-profile Brazilian midfielders brought great intrigue and elements of their culture to the club, Craig was not totally sold on their choice of music!
“The Brazilians had dodgy music taste, all samba stuff with little or no lyrics!
“I have a varied taste in music, I like most genres except house music! I grew up listening to Billy Joel, I like anything by him, with some Michael Jackson thrown in!
“I’m showing my age now but the first album I bought was ‘Dark Side Of The Moon’ by Pink Floyd.
“I’ve been to lots of gigs, my favourites were the Oasis gigs in Manchester and Newcastle.”
Starting out at Liverpool as a youth team player, Craig was signed by Dario Gradi at Crewe in 1988, enjoying promotion to the old Division Three in 1989.
The Alex suffered relegation back to the fourth tier in 1991 but reached the play-offs in Craig’s last season with the club a year later.
Lennie Lawrence acquired Craig’s services for Boro during the Premier League’s first season, although disappointment would follow as they were relegated at the end of the 1992-93 campaign.
The yo-yo nature of Craig’s early career would continue as player-manager Bryan Robson achieved promotion back to the Premier League for the club in 1995.
Craig started all three of Boro’s 1997 cup finals, in the FA Cup defeat to Chelsea and the Coca-Cola Cup draw with Leicester City, both at Wembley, as well as the replay loss to Leicester at Hillsborough.
The anguish of the big-day experience reared its head once more for him in 2000 when his Barnsley side were beaten 4-2 by Ipswich Town in the Division One play-off final at Wembley.
Craig’s successful penalty that day brought the game back to 3-2 in the 78th minute but was to be scant consolation for the Tykes.
“Every time I played there it was a very special experience and they were all different. The best atmosphere was the FA Cup final.
“I had mixed emotions about Wembley as I never won there!”
The cup final jinx was laid to rest in February 2002 as Craig replaced Keith Gillespie in the 75th minute at the Millennium Stadium as his Blackburn Rovers team overcame Tottenham Hotspur 2-1 to lift the Worthington Cup.

Former England hero Paul Gascoigne was a teammate of Craig’s in 1998 and although Gazza once had a well-known dabble in music, noticably with his collaboration with Lindisfarne on ‘Fog On The Tyne Revisited’, this never actually cropped up in conversation.
“I can’t remember ever talking music with him but he was a great person to be around. A genius footballer and a very generous person, and a bit mad.”
A short-lived stay with Aberdeen came in 1998 after leaving the Riverside, in addition to stints with Coventry City and former club Crewe (both loan) as well as brief stays with Leicester City, Leeds United and Darlington.
Before retiring in 2007 at Hartlepool United, Craig also tried out non-league football as a favour for a former Boro teammate, as well as playing overseas.
“I played three games for Spennymoor to help Jamie Pollock out and I played for Apollon in Cyprus where we won the league. I loved Cyprus it was brilliant, a good standard and a great lifestyle.”
After spending his longest spell at any club with Middlesbrough it is perhaps fitting that Craig is back now passing on his experience to some of the club’s youngsters.
“I’m currently coaching the Under-13’s at Middlesbrough and I love it. Coaching and managing is something I would like to do and I also enjoy the media work.”

One of Craig’s favourite songs: