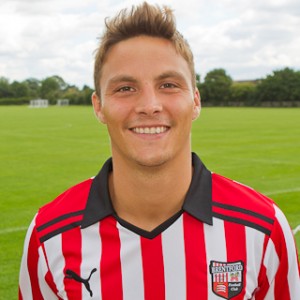 Brentford winger and free-kick specialist Sam Saunders would not describe himself as an ardent hip-hop fan but nevertheless it was a certain superstar rapper who helped to kick off his music collection!

The 28-year-old former Dagenham & Redbridge star is the third Bees player to feature on the site after defender Leon Legge and midfielder Marcus Bean, and Sam’s first record bought provides the perfect link between football and music.

“I would say it was the England song (New Order ‘World In Motion’) when John Barnes did the rap, I still know it!”

For all his achievements in the game and the many young players who idolised him, Barnes’ rapping holds almost just as high a place in the memory banks of supporters, especially with lyrics like ‘Liverpool FC is hard as hell’!

When it comes to the urban music vibes at Brentford, Leon Legge holds the aces, with Irishman and former Leeds midfielder Jonathan Douglas offering an alternative with his choices.

“Leggy or Johnny Douglas (are in charge). I prefer JD’s, it’s more Kings Of Leon, Leggy’s is more ‘shoot this, shoot that’ kind of stuff!

“A lot of the boys like the gangster rap stuff. I can suffer it in small bits but JD, Niall (McGinn), Gaz (Alexander) and Marcel (Eger) ain’t keen on it.

With ex-Manchester City striker Uwe Rosler managing the club, what does the former East Germany international reckon to the players’ music?!

“He does not like it but he would never get the chance to touch it!”

Sam started out at nearby Queens Park Rangers before going on to represent Welling United, Ashford Town (now known as Ashford United) and Carshalton Athletic.

In 2005, John Still brought him to Dagenham & Redbridge and after finishing 10th in Sam’s first season at the club, the Daggers won the Conference title in 2007 to gain Football League status for the first time in the club’s history. 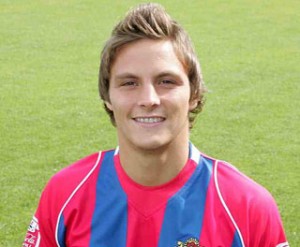 He played 24 times in total as the team successfully avoided relegation from League Two in 2007/08, the fact that he did not score is all the more surprising when you consider how fruitful the following year would be.

An 8th-placed finish in 2008/09 (just a point off the play-off places) was fuelled considerably by striker Paul Benson’s 18 league goals, as well as a terrific 14 from Sam.

His productivity from the right side impressed a number of people in the game and it was Andy Scott who had just guided Brentford to the League Two championship who took Sam to Griffin Park.

The Bees came 9th in League One in 2009/10 and Sam featured 29 times in all competitions on his return to West London, scoring his first for the club against Yeovil Town in April 2010.

That strike against the Glovers was a free-kick, and he is well-known for his dead ball prowess, inevitably drawing comparisons with David Beckham, as indeed any regular scorers in this way usually are.

Sam scored three goals last season in a campaign where he played at Wembley in the Johnstone’s Paint Trophy final defeat to Carlisle United, and he confirms that the ex-England captain Beckham is a source of inspiration for his set pieces.

“Becks is, without doubt, I do practice but I don’t overdo it. It’s more natural and you can never reproduce a match day situation anyway.”

Following Andy Scott’s departure, seasoned goalscorer Nicky Forster stepped into the managerial breach in February 2011 to guide the club to 11th in League One, Scott having also notably beaten Hull City and Everton in the Carling Cup before leaving.

The play-offs have been discussed as a realistic objective and with the team 7th, two points behind Notts County in the last top-six place, there is reason to be believe that it can be attained.

Footballing quality and team spirit play a huge part of course, as well as endeavour, something Sam has displayed as another example of a non-league player who made it professionally.

“We have the players, we just need a bit of luck and that word – consistency. There was a stage when I wasn’t playing and people would ask me how I was keeping my head, I think working hard made me appreciate what I had.” 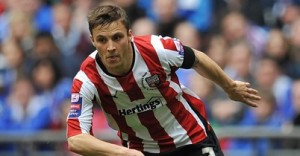 With six goals in all competitions so far Sam is the club’s top scorer and he has been raising money for Free Kicks Foundation, calling on his supporters to pledge an amount for whenever he scores, also matching the donation each time himself.

“Well it’s a thing I have started with @freekicks on Twitter, trying to get the Bees fans to donate every time I score. I’m just trying to give a bit back and if interested, the page is www.justgiving.com/samsgoals.”

Sam bagged the winner in Saturday’s 2-1 away victory over Rochdale and was the instigator of Brentford’s attacking spark in their recent draw with Sheffield Wednesday at Hillsborough.

This was a game I was at and one where the home fans engaged in what were generally light-hearted verbal exchanges with him when he took the corners in front of the Kop.

“I take it with a pinch of salt and play along. I love the interaction with the fans home and away, it’s a great part of football and you really enjoy it.”

Injury troubles and a lack of a real sustained run in the side had held back Sam at times at Griffin Park in the past but under Rosler’s management he has started to thrive.

Observers of his play will testify that he is a player with an abundantly clear level of natural ability and he has emerged this season so far as one of the standouts in a promising Brentford team.