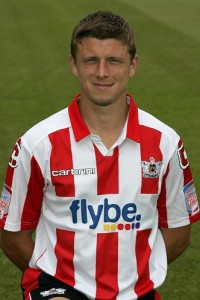 Bristol-born Danny, 30, spent three years on Humberside with Barmby one of his Hull colleagues, describing his footballing ability in the most positive of terms, even if he cannot speak as highly of his music!

“Nicky Barmby used to love Elvis Presley, it was his era! Elvis is a legend but I don’t want it on in the gym.

“Barms was without doubt the best player I have played with, the ultimate pro and it’s a pleasure to say I have played in the same team as him.

“There was also (Cheltenham Town defender and ex-Bristol Rovers teammate) Steve Elliott. He loves heavy metal and if I got in his car I had to take ear plugs!”

Centre-back Danny started out with Bristol City and his debut came while he was still 18 years old, in a 2-2 home draw in Division Two (now League One) against Oxford United in April 2000.

That first appearance was at a time when the Robins were under the caretaker management of Tony Fawthrop and the late David Burnside, before Danny Wilson returned to management at the club following his departure from Sheffield Wednesday.

Playing under Wilson for four years before midfield mainstay Brian Tinnion took over, Danny appeared 180 times for the Ashton Gate club in all competitions and joined Peter Taylor’s Hull City in the Championship for £200,000 in July 2005.

The early days at the club were impressive for Danny as he played his part in a Tigers defence that kept three clean sheets in his first five games in 2005/06 before knee trouble would rob him of the rest of the season after nine appearances.

He returned in 2006/07 to play 22 times, featuring once more for Hull the season after, before moving north for a brief loan spell with League One Hartlepool United in October 2007.

It was back to his home city with Bristol Rovers soon after, on loan before signing permanently in January 2008, with goals for him that season coming against Port Vale, West Brom and Fulham.

After 112 games for the Gas, his four-year stay would unfortunately end in relegation to League Two last season.

Danny, who has spent his entire career in the second and third tier of English football, journeyed next to his current side, Paul Tisdale’s Exeter City where he is enjoying his football and how he is feeling at present.

“I feel I’m playing well at the moment, I feel as fit as I did when I was 21 at Bristol City so hopefully I can carry on performing well for the remainder of the season.”

He has played 21 times so far, scoring his first goal for the Grecians at the weekend in the 3-0 win over Tranmere Rovers and he hopes they can continue their ascent up the League One table from their 17th-placed berth.

“On a team point of view we want to finish as high as we can. We are working towards mid-table now and once we get there we will look further up again.”

At the St. James’ Park club, Bristolian full-back Scott Golbourne and captain David Noble both previously represented Bristol City but Danny has of course played for both of the city’s league clubs.

Full-back and winger Brian Williams played for both clubs in the derby game itself in the 80s, with strikers Peter Beadle and Marcus Stewart, midfielder Gavin Williams and goalkeeper Steve Phillips other examples.

Although Danny has not played for both in a Bristol derby like the names above, he has donned the City jersey in a 3-0 success against Rovers in a January 2002 match-up in the Football League Trophy.

“It was great representing both Bristol clubs because I’m born and bred. I had my best years at Bristol City, it’s a massive club with huge ambition.”

Although Nick Barmby’s Elvis classics are no longer something Danny gets to enjoy/suffer, the selections dominating the Exeter City airwaves pretty much suffice!

“A lot of dance music gets played, Sak Noel (‘Loca People’) is a tune that the boys have a bit of banter with!”

As for Danny’s personal sound system preferences, as the two artists below illustrate, his music taste over the years has altered somewhat!

“The first record I ever bought was Rick Astley ‘Never Gonna Give You Up’, I still love the song now. My favourite artists at the moment are Nicki Minaj and Rihanna.

“I love r&b and hip-hop, the music I dislike is bands like Nirvana, not into all that heavy metal stuff!”

Furthermore, when it comes to albums there is an esteemed songstress who is particularly deserving of a place in his list of favourites for a special reason, as he explains:

“I have a few favourite albums that I like to chill to, Alicia Keys ‘The Element Of Freedom’ because it used to get my daughter to sleep! Also Usher ‘8701’ is a legend of an album.