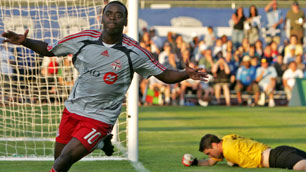 Since departing the English game in 2008, ex-Arsenal and Tottenham Hotspur midfielder Rohan Ricketts has been on something of a voyage both on and off the field, making some considerable connections along the way, with US star 50 Cent a notable example.

The 28-year-old met the ‘Get Rich Or Die Tryin” rapper and actor during his spell in Major League Soccer with Toronto FC (from 2008-2009), even seeing 50 wearing a replica shirt with ‘Ricketts’ emblazoned on the back at one point.

“It was through speaking to someone from his security in Toronto that I got the chance to meet him. I was a big fan of his older stuff, although I do still like his music now.

“I got to visit two of his offices in New York and we’ve kept in contact. Hopefully I’ll get the opportunity to meet up with him again, he’s very intelligent and someone I’ve learned a lot from.”

Rohan was an FA Youth Cup winner with Arsenal in 2000 and 2001, appearing for the Gunners’ first team in their 4-0 Worthington Cup win over Manchester United in November 2001 as a 70th-minute replacement for Jermaine Pennant.

That night at Highbury, French forward Sylvain Wiltord netted a hat-trick and Rohan’s first taste of professional action would be his only Gunners outing before a surprise switch to North London rivals Spurs in 2002.

“There were a lot of different cultures at Arsenal, the French players and those with African backgrounds for example. The older players liked their hip-hop, but more old school artists, guys like KRS-One and Big Daddy Kane.

In three years at White Hart Lane, he appeared 36 times for the club, also spending time on loan with Coventry City and later Wolverhampton Wanderers who he joined permanently in 2005, being re-united with his former Spurs manager Glenn Hoddle.

“The music when I was at Spurs was more r&b and hip-hop, UK garage and house were popular as well. The Caribbean players liked their reggae, Jermain Defoe for example with his St. Lucian background was into his soca music.”

After 56 games with Wolves in two years, as well as a brief loan spell at fellow Championship club Queens Park Rangers, he left Molineux in 2007, signing for Barnsley who are at present his most recent English side.

Rohan’s stay in South Yorkshire took in 13 appearances before he left Oakwell in April 2008 to join Toronto FC in an exciting new chapter of his career and indeed his life.

The South Londoner thoroughly enjoyed his experience in Canada, experiencing very good form in his debut season for the club, netting six and finding a place in his heart for the city.

“It was easy to settle in Toronto, the people are much kinder in general than London for example. I really like it there, it’s my home , well my other home, and I would encourage anyone to check it out.

“The music in Toronto as a city is really mixed, with the African players at the club I got into the African music and I love it still. I also got into salsa there as there is a massive Latin community, the reggae is more isolated, it’s less widespread.”

In 2010, Rohan spent time briefly with Hungarian club Diosgyori VTK , as well as FC Dacia in the Moldovan capital of Chisinau, where he had to deal with a pretty astounding situation.

His story in Moldova was detailed at length in Column 10, his online magazine which brings together the work of contributors from all over the world to form a site catering for a range of subjects.

Rohan’s experience with FC Dacia has to be fully read to accurately understand the goings-on, which included broken promises, bizarre characters and withheld salary payments.

He then spent the last few months of the 2010/11 season in Germany with SV Wilhelmshaven, leaving in the summer and bringing the end to a unique three years abroad.

“Germany was the easiest of the last three places as most people spoke English there. Moldova was very difficult, although some of my teammates were very funny and I got on well with them.

“Hungary I’d say was the most dificult, extremely so. The people there were very closed up and it was hard.

“The standard of football at the club I was with in Germany was decent. There were some players there who could play at a higher level, as well as some who definitely should think about moving lower!”

The mention of Column 10 gives a bit of an insight into some of Rohan’s ventures outside of the immediate business of playing, as he has fully utilised his acumen in creating new opportunities across a wide spectrum of subject areas.

He has appeared on television and radio (also presenting), worked as a football analyst, written for Fan 590 and Sabotage Times, to name but a few, with his articles in particular providing a unique insight into his experiences.

At present his close friend Christopher Ellis, a singer and songwriter, and son of the late and acclaimed reggae star Alton Ellis, is making great progress in his own career.

Known also for his work with Stephen and Damian Marley, Ellis is due to perform at Sunday’s One Love Festival set between the borders of London and Essex, alongside a host of fellow musicians.

Rohan has been keenly supporting Christopher, while working on his other ventures, which of course include finding a club for this season, spending time on trial with Chesterfield with links also to moves to Southend United and Stevenage FC.

“I’m currently speaking to teams, one in England, one in Scotland and also in Germany.”

Ending on the subject of music, Rohan has a favourite song which he likes to take the notion from, a particularly apt one considering the complex and interesting journey he has been on for some time now.

“Bob Marley, One Love. With the feeling of it I think it speaks to the world.”