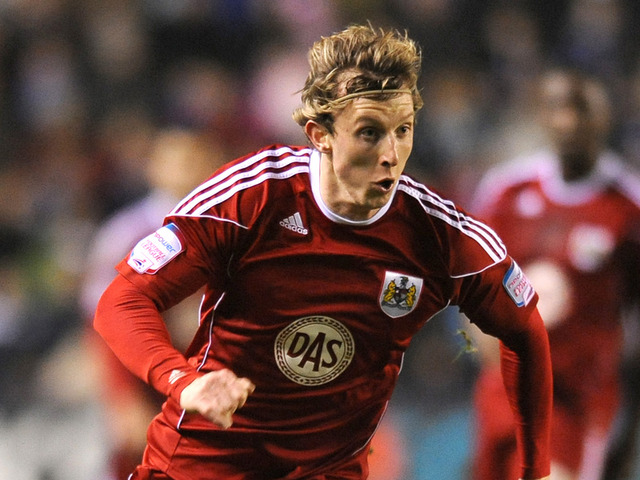 Bristol City winger Martyn Woolford is one of a number of players to successfully make the progression from non-league football to the professional game and it is one of his ex-top level colleagues at Ashton Gate whose iPod gets the most airtime before games.

The 25-year-old Yorkshireman joined The Robins from Scunthorpe United in January, with former Premier League players such as David James, Neil Kilkenny, Nicky Hunt and Kalifa Cisse among his current teammates.

Striker Jon Stead also featured in the top division with Blackburn Rovers, Sunderland and Sheffield United and it is the striker who generally gets to play the music for the team in the dressing room.

“Steady’s is the one that goes on if he’s got it,” Martyn said. “If not it depends who’s got one with them, it seems to be the same few iPods going on.

“Most keep theirs to themselves but it depends who brings their iPod. It’s usually the latest dance and r&b tracks that get played, whatever’s big at the time and upbeat to get you going.”

Much like most who are interviewed for this blog, the Pontefract-born left-sided player is into a mix of music, but he has also been to a few reputable live shows.

“I like a variety, I’ve got a random iPod. I like indie, The Verve, Snow Patrol, Kings Of Leon, Paramore.

“I saw The Enemy in a smaller gig too which was good. I’ve also been to Rihanna and Beyonce concerts with my girlfriend and really enjoyed them too.”

Born in 1985, Martyn grew up in an era where the ‘Now That’s What I Call Music!’ compilations were popular, the first was released in November 1983 and this July saw the 79th regular edition go on sale.

“I can remember getting the ‘Now’ albums bought for me when I was younger. I think the first album I bought was Red Hot Chili Peppers’ ‘Californication’, about 15 I think I was, at a guess.”

As a teenager, he began his career in the Northern Counties East League Premier Division with Glasshoughton Welfare, a team who goalkeeping legend Bruce Grobbelaar made an appearance for in 2007 to help raise much-needed funds for the club.

With Barnsley, Doncaster Rovers and Bradford City reportedly deciding against signing the emerging youngster at the time, Martyn joined Frickley Athletic of the Northern Premier League’s top tier in the summer of 2005.

While at Frickley he had combined football with working on a building site and studying civil engineering at Leeds Metropolitan University.

The following year with interest from league clubs increasing, he opted to sign for York City of the Conference and reached the play-off semi-final in his first season at the club, although they lost out to Morecambe.

“When I signed for York they let me carry on my studies up to HND (Higher National Diploma). I might pick up the degree again some time.”

He hit 17 goals a season later and his Football League chance arrived in 2008 when he joined Nigel Adkins’ Scunthorpe United who had just been relegated to League One. 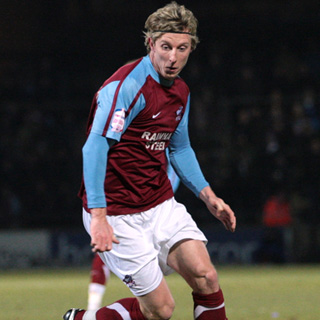 The 2008/09 campaign was a very successful one for Martyn, culminating in magnificent fashion with a Man of the Match display at Wembley in a 3-2 play-off final victory over Millwall.

He instigated both goals for long-serving midfielder Matt Sparrow before notching the winner in the 86th minute to send the Iron up to the Championship on a glorious day for him and the club.

“It took a while to sink in. Playing on that stage alone was amazing but to win promotion, score the winner and get the Man of the Match as well will stick with me for life.”

In the latter stages of the January 2011 transfer window the time came for Martyn to move on, making the switch to fellow Championship side Bristol City.

Unfortunately, Scunthorpe did not manage to beat the drop in 2010/11, but after 20 goals in his two and a half years at the club, Martyn left with a heavy heart and fond memories.

“I was happy with what I achieved at Scunthorpe. Promotion, then surviving the next season and chipping in with important goals, leading goal scorer when I left last year.

“It was difficult to leave as I enjoyed my time there and the players and all the staff were great.”

However, a select few of the Glanford Park dressing room had some taste in music that Martyn was not quite sold on, without mentioning any names, not quite anyway!

“A few of the Irish boys had some random Irish music which was horrendous!”

Persistance has certainly been key for him and without wanting to stumble upon any cliches, graft has played a huge part in taking the former building site worker to English football’s second level.

“I’ve enjoyed every bit of each step up, playing with better players helps your game. I’ve had to work harder and harder to make sure my game is up to the standard it needs to be, but I love training so that’s not a problem.”

Outside of football, a keen golfer and a fan of box sets, namely ’24’ and ‘Entourage’, Martyn, having come so far by the age of 25, has high ambitions for 2011/12 with Bristol City.

The Robins have taken four points from their opening four league games and the winger has even featured in an unorthodox role at left-back so far this season.

Coming on as a late replacement for Albert Adomah in the 0-0 home draw with Portsmouth this Saturday, Martyn returned to his favoured left-wing role, which will probably be a necessity if he is to reach his own personal goal target.

“Everyone at the club has got high hopes this season. Personally I’m aiming to first secure my starting place and then to get ten goals, the aim as a team is to get promotion.”

Some of Martyn’s favourite songs:

Example – Changed The Way You Kiss Me