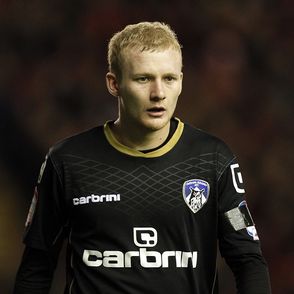 Oldham forward Robbie Simpson has relished being back at Boundary Park on a permanent basis and while lifting the lid on his Latics colleagues’ sound choices he voiced his belief in the strength of the link between music and football, even if his manager may disagree with some of his players’ selections!
The 27-year-old former Coventry City man had spent time at Oldham on loan from Huddersfield Town before making a full-time switch to the North West in January. The management team at the club is headed by the ex-Leicester City duo of former Scotland international Paul Dickov and Northern Ireland defender Gerry Taggart and Robbie offered a glimpse into their preferences while running through the music tastes circulating at the League One side.
“He’s (Dickov) definitely not into rap, we have a lot of hip-hop on the team coach and while we were on the journey for the Portsmouth game he was shouting down the coach to ‘turn that rubbish off’! Gerry Taggart’s a big fan of house music, anything with a beat he’s into.

“Jonathan Grounds is really into his house music, coming back from Marbella this summer I saw that there’s a big house vibe over there, he does the music in the changing room as well. Glenn Belezika likes all the hardcore hip-hop and he tries his best to rap a bit!
“James Wesolowski is massively into indie music and he always comes up with bands no one has heard of. Connor Brown is always playing nothing but r&b on his iPad which is good too.’’
Dorset-born Robbie represented both Cambridge City and Cambridge United as well as gaining a degree in Sports Science and Mathematics from Loughborough University before he received his break in the Football League with Coventry in 2007. After 71 appearances and 7 goals in total for the Sky Blues he moved to Huddersfield in the summer of 2009 for £300,000 but his opportunities were to be limited under Lee Clark and he sought first-team football elsewhere. While with fellow League One club Brentford in the 2010/11 campaign he scored 8 times before joining up with current employers Oldham last season. The separate qualities of football and music and how they intertwine is the idea of this site so it was heartening to hear Robbie comment on the link he believes the two have while discussing his own favourite artists and genres. 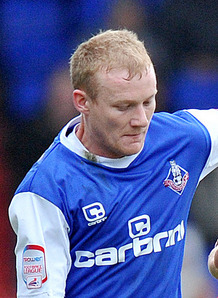 “I think the links between football and music are massive and I don’t know what a dressing room without music would be like, it would be a strange situation. I’m quite open with my music, there’s not really a specific type I go for above all else but I’m into r&b, funky house and back in the day a lot of old school garage.
“The last album I bought was Drake’s and his was the last concert I went to, I’ve actually seen him twice so he’s probably my favourite artist. I’ve not been to any festivals, which I’m gutted about, but I do want to go to one soon.
“I was going to go to Ibiza when Swedish House Mafia were out there but my missus got to enjoy that pleasure instead! Since moving to Manchester I’ve noticed that quite a few people seem to be into Ben Howard and I quite like his music.
“Sticking to the r&b though I’d say Ne-Yo is one of my favourites and especially now he’s moved to the house scene a lot more. I’ll give everything a go but I don’t like too much of the rock and metal stuff and I don’t go overboard with the more depressing side of indie either!’’
The appreciation for r&b is highlighted in Robbie’s first record bought and the song in question was a collaboration that was huge in America and almost as successful here in the UK, reaching number two in the singles chart back in 1998.
“The first I ever bought was ‘The Boy Is Mine’ by Brandy and Monica when I was about 13.’’ 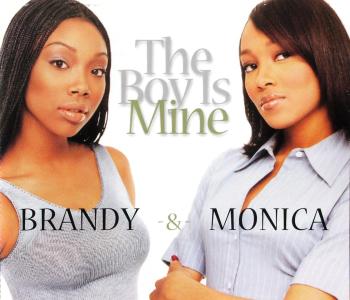 When speaking about teammates or fellow players he knows that make music in their free time Robbie cited two people who have both been covered in detail on here before with their own interviews, as well as a third player, who has a sibling in the industry.
“Leon McKenzie’s brilliant, he’s really good mates with Harvey (So Solid Crew) and he was always into his music and always singing. Leon’s got a really good voice and is passionate and he looks like he could do well, especially working with Harvey and the extra interest he’ll have from Celebrity Big Brother now.
“Neil Danns is massively into his music and Aaron McLean is another one who’s really good, his brother is obviously the singer McLean.’’
Due to the ever-popular initiation procedure many teams have stipulating that new players have to sing in front of everyone it is not only those who have a gift for rousing vocal efforts who are required to get up there and perform!
“When I first signed for Oldham I did a bit of garage MCing which went down quite well and Jonathan Grounds when he signed this season sang ‘Maggie May’. One of my good mates Nathan Clarke also did Usher ‘Nice and Slow’ which was great.’’
Ex-England defender Tony Adams was said to have tried his hand at the piano during the latter spell of his career but Robbie identifies one of his own one-time teammates who seems to enjoy that particular genre!
“There’s definitely been a few for dodgy music tastes but the strangest would have to be Jay Tabb who’s now at Reading. He was with me at Coventry and he played classical piano music and liked listening to opera and he’s the only footballer I’ve met that seems to be into that!’’

Robbie’s time with Oldham began with a loan spell but was made permanent towards the end of the January transfer window this year, and last season he scored 9 times for the club. Among the goals was his hat-trick in the league against Chesterfield and his 28th-minute strike at Anfield to give the Latics the lead against eventual finalists Liverpool in the third round of the FA Cup before the top flight quality led to a 5-1 success for the Reds. He has noticed a difference since he made the move on a full-time basis and feels this can continue to show in his performances for Paul Dickov’s side.
“I’m delighted to be back, during my loan spell and afterwards I got to know the manager and played some of the best football of my career. Over the summer it was a matter of getting the right deal sorted for me to stay and I’ve been more settled off the pitch since then so hopefully we can build on last season.’’
As a Sheffield Wednesday supporter I have seen Robbie play against us on a number of occasions for Brentford, Oldham and for Coventry as he scored back in 2008. When he last came to Hillsborough in April, Oldham were in the midst of a poor spell of form but I could see promising signs in a lot of their play despite their 3-0 defeat. Oldham have four points from the opening four games of 2012/13 and face league leaders Notts County at home this coming Saturday. Robbie describes the improvement that has been targeted this season and also believes that League One is much more of an even playing field in comparison to last time around.
“It’s definitely a lot more open than last year when you could pretty much have named the top five before the start of the season. This season you can’t say one team is certain to be in the top six but I wouldn’t say the quality has gone down.
“The teams coming down and the teams coming up are all strong when you look at the likes of Swindon, Crawley, Shrewsbury and Crewe. There’s a lot of teams who could be up there challenging, even those who survived last year, so it’s a very tough league.
“The manager has changed the squad around and built it up, I wasn’t there at the start of last season but the feeling from the players is that it’s a lot more settled now. We’ve brought in the likes of Jonathan Grounds and Lee Croft with Premier League experience and have kept some of the better players.
“We went away in pre-season and that brought the team together so there’s a really good feeling at the moment and I think we can definitely improve with the league being a lot more open this year.’’
The Sports Science and Mathematics degree Robbie gained was referenced earlier and although he is still only 27 he has thought about how this could possibly fit into his future plans. Among his off-field ventures is racehorse-owning but he would like to stay in the game once he retires, though that time is hopefully still a long way off yet.

“One of the reasons I went to uni was for that reason, one bad injury or bad tackle and my career could be over so I always have that to fall back on. Even after football I’ve still got that but I’m interested in getting my coaching badges and then maybe management but like you say I’m only 27 so hopefully I’ve got a good few years yet.’’
After hearing all about the good and the bad of Robbie’s teammates with regard to the musical preferences I put one of my regular questions to him to end with. The 5-a-side team he would choose (including himself as a prerequisite) comprising of the best he has played with in his career so far contains a distinctively Coventry City-themed basis, with the attacking prowess of one of his ex-Huddersfield colleagues added in for good measure.
“Keiren Westwood in goal, can I have two defenders? Danny Fox and Scott Dann at the back, and in midfield… Anthony Pilkington.’’