In his previous stay with Real Salt Lake, striker Robbie Findley’s form helped to secure the MLS Cup and took him all the way to the World Cup, and now after his time in England he is back with the team and part of a winning atmosphere once again.

The thought of the 11-cap US international lining up in the RSL jersey like the old days was more than enough to get the fans’ enthusiasm flowing at the start of the year. The 28-year-old had spent the previous two years doing what he had set out to achieve by representing a team in Europe, and a prestigious one at that. Nottingham Forest may have been out of the top flight for 14 years now but the former champions of England and two-time European Cup winners remain a substantial proposition in the second tier.

Off the back of a World Cup year in 2010, Robbie’s stock was high having appeared three times for Bob Bradley’s team as they reached the last 16 in South Africa. The Arizona native battled it out with the likes of John Terry and Jamie Carragher as the US drew 1-1 with England in the opening group game in Rustenburg. Robbie also started in the knockout defeat to Ghana after Landon Donovan’s last-gasp winner against Algeria had snatched top spot in Group C from England.

His move across the Atlantic part-way through the 2010/11 season saw him join a Nottingham Forest team chasing a long-awaited return to the Premier League and manager Billy Davies made considerable efforts to get him to choose a switch to The City Ground. As it would transpire, injury played a part in holding Robbie back during this chapter of his career but he did score six times for Forest, making 29 appearances in total. He had also featured seven times on loan with Gillingham in 2012/13, and they would win the League Two title at the end of the season.

Robbie and Nottingham Forest went their separate ways in January this year but the former LA Galaxy man is glad to have had the opportunity.

“I had a great experience out there in England. It was crazy going through five coaches in two years, but I learned from each one.
“I also met a lot of good people and still keep in touch with them today.”

As he makes reference to, Robbie ended up getting the benefit of tutelage from five different full-time Forest managers, as well as working with ex-Chelsea and Holland striker Jimmy Floyd Hasselbaink, who was first team coach. With the plus points of learning from Billy Davies (now back in charge), Steve McClaren, Steve Cotterill, Sean O’Driscoll and Alex McLeish naturally came immense upheaval.

The club has been led since July 2012 by the Kuwaiti Al-Hasawi family and they are set on achieving promotion back to the big time. It didn’t happen while Robbie was there but the whole experience was worthwhile, and he enjoyed being in the country despite one or two initial roadblocks.

“I loved being able to get to London and Manchester on the train. It was obviously tricky driving at first, but I got the hang of that pretty quick.
“It was also hard for me to understand people even though they were speaking English. It got easier as the days went by.”

It was a case of returning to the scene of former glories when the January 16th announcement was made that Robbie would be running out for the Claret-and-Cobalt once again as his Real Salt Lake switch was confirmed. He hit 29 goals last time he was with RSL, including one that will never be forgotten in the Wasatch Front. In the 2009 season, Robbie scored a career-best 12 goals and he got the equaliser in the MLS Cup match against his old side LA Galaxy. The showpiece game went all the way to penalties with Robbie dispatching the second in the shootout as RSL triumphed 5-4 to take the title.

Two players who lined up in that final game of four years ago are still vital to the team and synonymous with the organisation itself today. One is goalkeeper Nick Rimando who produced an outstanding performance in the draw with Rocky Mountain rivals Colorado Rapids last weekend, and the other is midfielder and captain Kyle Beckerman who featured on here with an interview back in late 2011. Robbie explains their role and that of music in creating a positive atmosphere for the players before they go out onto the field.

“We have a pretty diverse locker room of players from different countries. Most popular is hip-hop, you’ll also get some r&b, rock, and Spanish music.
“It’s usually either Kyle Beckerman or Nick Rimando (who chooses the playlist). They have good taste in music, so the locker room is always in good vibes.”

Jason Kreis’ team have certainly taken that buoyant mood with them into games this year and they lead the Western Conference with 38 points from 23 games. Despite recent setbacks in losses to New York Red Bulls and Sporting Kansas City with late anguish in both, and drawing with Colorado Rapids to relinquish the Rocky Mountain Cup for the first time since 2006, there is every reason for RSL supporters and staff to keep the belief.

The team won their 100th MLS regular season game when they beat FC Dallas on the road last month and Robbie, who won the penalty for Alvaro Saborio to score from in the Colorado draw, tells how he likes to kick back and also how he tunes into the desired frame of mind on game day.

“Music helps me get ready for games and it also just relaxes me. My favourite genres are r&b and hip-hop, but I like all music.
“Meek Mill is probably my go-to right now and a lot of old school r&b. I play Meek Mill before my games.” 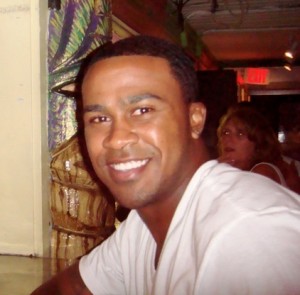 Singing for the pleasure (or pain) of teammates is something that many players in the game have to go through when they sign up to a new team. This initiation procedure has been explored many, many times on here with plenty of enlightening responses along the way! It is a dreaded prospect for a lot of players but some have the confidence to sing even when they have not been called upon. For Robbie, he was not alone when he showed off his voice on the microphone and he also recalls the performance provided by a Haitian international who he played alongside in his previous spell with RSL.

“I had to do karaoke with a few teammates and sang Bon Jovi’s ‘Livin’ On A Prayer.’ Not my choice!
“Jean Alexandre was one that I’ll always remember. He sang Usher’s ‘You Make Me Wanna’ on the bus.”

Former Oregon State standout Robbie may have gone all ‘Slippery When Wet’ with his karaoke link-up but he kept it strictly hip-hop with the first record he ever bought.

“I want to say it was Bone Thugs-n-Harmony.”

Since his switch from LA Galaxy in 2007, Robbie has built up a strong connection with RSL which began when his six goals in his first season made him the first Claret-and-Cobalt rookie to get the team’s Golden Boot. A further six followed in 2008 before that superb success in 2009 and his 12 strikes to aid the achievement.

Prior to his move to Nottingham Forest, he had scored 5 and assisted 4 in 2010 as RSL reached the Conference semi-finals where they were ousted by FC Dallas. Portland Timbers had selected Robbie in the expansion draft towards the end of that year which meant that even though he went to England instead RSL had to pay the Timbers allocation money this year to acquire his rights. In 2013, the side under ex-US international and the club’s very first player Jason Kreis have by and large found that sought-after winning formula.

Robbie won the AT&T MLS Goal of the Week for his right-footed curler from the far side of the box in the 3-0 home win over San Jose Earthquakes on June 1st. His coach Kreis mentioned in recent weeks how Robbie has had a stop/start time of it with some injuries this year so the hope is now that he can have a free run through to the season’s end. He has scored five goals in 16 regular season games to this point and there are some essential aspects that have allowed him to enjoy being back.

“It is a very professional club with an owner (Dell Loy Hansen) that really cares about the players. He visits us on a consistent basis and listens to what we have to say.
“It’s like a big family, from the players and coaching staff, to the front office.”

In the question to wrap it up, Robbie was required to think over the teammates he has had in his career so far and to pick the best four to play alongside him in a 5-a-side line-up. Here are the ones he decided on and in goal there is one of RSL’s MLS All-Star representatives, behind a former Nottingham Forest colleague at the back who according to the chant ‘you’ll never beat’. In midfield there is Robbie’s aforementioned current club captain and recent Man of the Match as the US beat Panama to win the CONCACAF Gold Cup. Finally, leading the line with Robbie is an Armenian striker who plays for Spartak Moscow and netted eight times to win the MLS Cup with RSL four years ago.

“Nick Rimando- the best keeper in MLS in my opinion. Wes Morgan – big, strong defender with good pace, doesn’t get beat often.
“Kyle Beckerman – strong presence in the midfield, reads the game well and is a general in there. Yura Movsisyan – explosive striker and gets the job done in front of the goal.”

Keep on track with each and every Beats & Rhymes FC interview