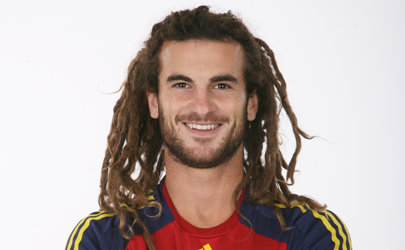 Alongside the premier names in the USA international squad, it is Jesse Bignami who is combining his role as kitman with a stint in charge of the team’s sound system, as Real Salt Lake captain and national team midfielder Kyle Beckerman explains.

Music lover Kyle, 29, said: “With the USA team our kitman Jesse is all over the tunes. The past couple of games he’s had on a big mix with all pretty popular hip hop tunes remixed with popular dance beats.”

Hailing originally from Crofton, Maryland on the East Coast, Kyle is now plying his trade in the West of the country in Utah as he skippers the 2009 MLS Cup winners Real Salt Lake.

He has also represented his country on 18 occasions and has been part of ex-Germany striking sensation and national team coach Jurgen Klinsmann’s selections in his early days in charge of the USA squad.

Music forms a prominent part of Kyle’s personality and there are a plethora of artists and bands who rise to the forefront of his thinking when it comes to his current personal favourites, with reggae featuring strongly amongst others.

“Nothing comes to mind that I dislike, I guess I just wouldn’t listen to it if I didn’t like it. There is this track by Lil Wayne called ‘Kobe’, I like to listen to it before I take to the field.

“The first record I ever bought was either an Ice Cube or Cypress Hill cassette tape.”

In the home dressing room at Real Salt Lake’s Rio Tinto Stadium, experienced goalkeeper and a US international in his time Nick Rimando, gets the opportunity at times to showcase his choice of music.

As well as Kyle himself, also frequenting the pre-match selection was Jamaican international midfielder Andy Williams, a player who this week announced his retirement from the game at the age of 34 having been with the club since its first season in 2005.

“We play a lot of hip-hop in the locker room, especially before games. A lot of times I’m the DJ but sometimes Andy Williams.

“Rimando sometimes gets in there and will want to rock out with a mix of his that usually has some punk. He also gets our in-stadium music before games, which we might have to change!

“Nobody really has bad taste in music but we have some guys from South America that like their local music. I’ll just say it doesn’t make it to our stereo very often when everyone’s around.”

As a teenager, Kyle began in Major League Soccer with the Miami Fusion, who before ceasing operations in 2001 had on their books prestigious Stateside names such as frontmen Roy Lassiter and Eric Wynalda as well as MLS legend and ex-Everton and Portsmouth midfielder Preki.

The club also had former Colombian midfielder and one of the most distinctive footballers of his generation Carlos Valderrama, in addition to ex-West Ham United and Manchester City midfielder Ian Bishop, and Ian Woan, who spent a decade with Nottingham Forest.

Having recovered from the setback of a leg break while playing for the Nike/MLS-Project 40 program, Kyle would go on to recover to join the Colorado Rapids in 2002.

He firmly established himself in the team from the 2003 season onwards and went on to notch an impressive 7 goals in 2006 from his midfield role.

Mid-way through the 2007 campaign he moved to Real Salt Lake, the Rocky Mountain rivals of the Rapids for whom he had made 145 appearances.

This was also the year in which he made his international debut in a January friendly with Denmark, going on to play at the Copa America too.

After securing the captaincy at RSL in 2008, becoming an integral part of the ‘Claret-and-Cobalt’, he would be selected for the MLS All-Star line-up in 2009 (and then again in each of the next two years).

Internationally he represented the US at the 2009 CONCACAF Gold Cup, playing all of the games as the team finished runners-up on home soil to Mexico.

Under former Major League Soccer MVP Jason Kreis’ management, Kyle was a key part of the RSL’s Eastern Conference and MLS Cup success that year, as they defeated the Los Angeles Galaxy in a shootout in the final to secure the trophy.

This season saw the team finish as runners-up in the CONCACAF Champions League, while losing out to eventual winners LA Galaxy in the MLS Cup semi-final, having finished in 3rd place overall in the MLS.

“Well I really try to look at the season from a team perspective,” Kyle said. ”I think we had to go through a lot of adversity with injuries, international call-ups and suspensions.

“With all those things thrown at us I think it’s a big accomplishment to finish in third place. I think we’ll learn a lot from this season and it will help our club grow in the future.”

With former Tottenham Hotspur idol Jurgen Klinsmann in charge of the US national team, Kyle has found himself in the World Cup winner’s plans, and has been buoyed by his coach’s influence thus far.

“Being coached by Jurgen has been great. We have been working really hard and trying to get familiar with what he is asking from us.”

With Kyle now a long-established name in the US game, I also put the question to him of whether playing for a European club is on his list of objectives for the future.

“The training in Germany has been great and their hospitality has been first-class. I think playing in Europe is every soccer player’s dream and sure I’d be open to it.

“That said, I’ve been really happy at Real Salt Lake and have enjoyed helping to grow the league into what it is now.”

The debate of whether football (I better call it soccer in this instance!) will ever manage to effectively bridge the gap in popularity in America to sports such as basketball, and the others that are a colossal part of the nation’s culture, has been discussed at length many times.

Kyle acknowledges the extremely gradual process that this will be but believes that legendary English Premier League stars like David Beckham and Thierry Henry performing in the MLS can only help the profile of the sport.

“Signings like Henry and Beckham have been great and I think our league has become more widely recognised in part because of them. Our league definitely has a lot more growing to do but I think in time soccer will be one of the top sports in the country and MLS will become one of the top leagues in the world.

“Unfortunately I will be long retired from playing professional soccer when that time comes.”

There are many dimensions to Kyle’s colourful persona, including his guitar-playing, fishing, skateboarding and ping-pong skills, as well as his time as a state wrestling champion back in Maryland!

He has also produced his own ‘KB5’ (his squad number) clothing range but beside all of that he still finds some time now and again to watch coverage of English football, when the difference in timezones allows.

“I try to catch as much English soccer as I can but some of the matches are just too early for me to get up and watch. I really enjoy when two big teams go at it and put on a good performance.

“I have no favourite team, I feel like I must be from somewhere to be able to really be a true fan. I just hope for a good match to watch and root for that.”