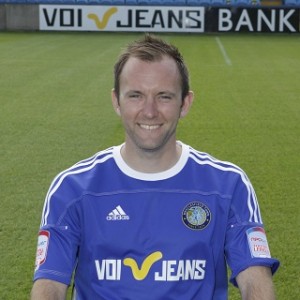 Although Macclesfield Town midfielder Matt Hamshaw is very much a family man, harking back to the first record he ever had brings back memories of two famous extraterrestrial puppets surrounded by female admirers!

“It’s an embarrassing one and I know I’ll probably get some stick for it from the lads but the first one I ever had was Zig & Zag ‘Them Girls, Them Girls’! I’d seen them on The Big Breakfast, I couldn’t have been very old!”

Matt would eventually develop his musical appreciation beyond the two characters from the planet Zog, to a slightly more local act!

Rawmarsh-raised and a firm favourite from his early career in Sheffield with Wednesday, it is a band who garnered huge acclaim in the Steel City before exploding into the mainstream whom Matt names as his favourites.

“I’m a big fan of Arctic Monkeys, with them being a local band and the accents they use in the songs, I like all that and I can identify with it. I like all music though to be honest, I’m not one of these people who can say they’re into a certain aspect like dance or r&b more than any other, I’m quite open with it.”

At the Moss Rose club, a midfielder and former Sheffield United youngster is the one currently tasked with choosing the pre-match changing room song selection.

“It doesn’t vary too much really, Sam Wedgbury does it at the moment, with hip-hop, garage and dance.”

When talking questionable quality of music taste from teammates in his career, it is two familiar international names from Hillsborough days gone by who Matt instantly thinks of.

“A lot of the foreign lads, Gerald Sibon had mad taste in music at Wednesday, Petter Rudi’s was bad as well. In fact just all the foreign players really!” 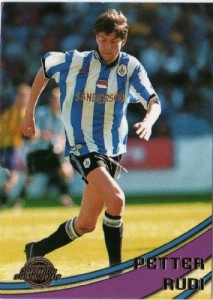 Shortly after relegation from the Premiership in 2000, Matt emerged as an exciting prospect for Wednesday at a time when the club was struggling considerably, decimated in no small part by high earners and underperformers.

An England international at schoolboy level (and subsequently for the Under-18s too) alongside the likes of Jermain Defoe and Jay Bothroyd, Matt’s professional debut for The Owls came in August 2000 away at Grimsby Town at the age of 18.

Looking back on that time, firstly under Paul Jewell’s management, he is philosophical when assessing how established players on huge wages may have affected the atmosphere around the place.

“It never really bothered me to be honest, I was at that age where I just loved Wednesday to bits and was honoured to be playing at Hillsborough. When you cross that white line you don’t really tend to think ‘oh he’s on £25,000-a-week’, it didn’t really affect me.

“Maybe looking back I might have thought I should have been on the same wages as them. There’s bits and bobs looking back where I could have got some better deals at times in my career but that’s life really.”

Following Jewell’s departure in February 2001, past caretaker manager Peter Shreeves took charge on a permanent basis, steering the club clear of relegation from Division One that year.

Former Wales manager Terry Yorath replaced Shreeves in October 2001 and the team reached the semi-final of the Worthington Cup by defeating Watford 4-0 at Hillsborough, a game where Matt scored a magical solo effort.

The goal is always associated with him by Wednesdayites and while it has been discussed with him often, he unsurprisingly remains proud of the effort that illuminated Hillsborough that night.

“It’s my best goal without a doubt. The circumstances play a part in it as well, in the quarter-final under Terry Yorath and looking to progress to the semis, and to score it in front of the Kop.

“The lads at Macc have all seen it on YouTube! I could spend all day talking about it with you.”

Having staved off relegation in 2001/02, Yorath resigned in October 2002 after he was told by a female supporter: “Terry you are a nice fellow but do the best thing for this club and quit.”

Chris Turner, who as manager would regrettably not get to enjoy a sliver of the success he had as a goalkeeper for his lifelong club, took over from Yorath.

Matt scored in Turner’s first game in charge, a home defeat to Derby County, and was a star performer in the 2-0 win over Nottingham Forest on Boxing Day 2002.

Unfortunately the high of his form would be ruthlessly eradicated by a knee injury in that game which would rob him of the next two seasons.

Wednesday were relegated to the third tier in 2002/03 and Matt offers a reason why that was the case!

“Yeah, me not being fit! No it’s hard for me to say, under Chris Turner the results picked up a bit but we’d left a lot to do by Christmas.

“Boxing Day against Forest was the best I’d ever played, I was flying. We’d changed from a 4-4-2 to 4-3-3 with myself and Adam Proudlock up with Gerald Sibon.

“It was a mixture of inconsistency, confidence and injuries that contributed to us going down. It hurt me more being injured and having to watch without being able to help.”

When Matt returned to play again in the 2004/05 season he found himself the club’s longest-serving player at the age of 22! 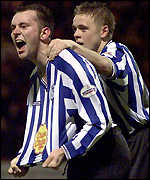 Turner was dismissed in September 2004 and replaced by Paul Sturrock who hauled the team from mid-table to promotion via the play-offs in his first season at the club.

“Paul Sturrock came in and got us all ultra-fit, he was what we needed at the time. It was a great year, players coming in like Kenwyne Jones were a massive help.

“Everybody in the team had personality and got on which is quite rare. Off the pitch we’d all go out Saturday night no matter what, even if it was just a meal, which was great.

“I still speak to lads like Chris Brunt, Glenn Whelan, Graeme Lee, Steve MacLean, we’ve been at each other’s weddings and have stayed in touch.”

After starting the two semi-final games against Brentford, departing early in the second leg at Griffin Park with a hamstring injury, Matt was to miss out on the 2005 play-off final at the Millennium Stadium where The Owls beat Hartlepool United 4-2 in a pulsating game.

“I’d had injections for ten days solid before the game and I thought I’d made it. I was in tears in Sturrock’s office, it felt like everything I’d worked for at Wednesday was for this game.

“It was still my mates playing though and it was a great day for the club and to see smiles on the fans’ faces. Unfortunately I got released a few days later so it was a bit of a bad week personally!

“Paul Sturrock’s a good bloke and when he told me he said ‘I know how much the club means to you’, I remind him that he released me though when I see him! I was devastated to leave, it took me the whole summer and a bit of the next season to get over it.”

His next port of call was Stockport County and as captain he came up against Wednesday in his fifth game for the Hatters, in a Carling Cup game at Edgeley Park in August 2005.

The vast away following that night showed their appreciation for Matt despite his status as an opposing player and he has the very best praise for Wednesdayites.

“They’re the best in the country for me. I know there’s fans like Newcastle’s but I can’t speak highly enough of Wednesday fans, home and away, selling out at places.

“It’s always the first result I look out for and I wished it would be the club I’d spend my whole career at. I’ll never stop supporting them though and I hope I get the chance to come back and thank them one day as you don’t really get the opportunity apart from in interviews.

“I’ve played against them before but not at Hillsborough so I hope we can get them in the cup.”

A former Mansfield Town player also, and a promotion-winner from League Two with Notts County, Matt played his 20th game of the season on Saturday against Gillingham.

Macclesfield are 13th in League Two at present, six points from the play-offs and he is not ruling out the possibility of breaking into those coveted places.

“You never say never and we want to finish as high as we can. With the young age of the team overall you can get inconsistency but importantly apart from losing players like Tyrone Barnett and Emile Sinclair we’ve managed to keep the team together.

“Age is creeping up on me and the gaffer (Gary Simpson) gives me a breather now and again. I struggle to play back-to-back games but I feel like I’ve picked up a bit and been quite good lately.”

A naturally talented right-sided player, Matt had the chance to learn from one of the best when a certain ex-England star was his reserve team manager at Wednesday,  and he names him as the best he has worked with.

“Chris Waddle because he still played as well and got involved in training. He helped me with crossing and tracking back every day and he was unbelievable.

“For a young kid it was fantastic for me and he’s not a bad one to pick is he?!” 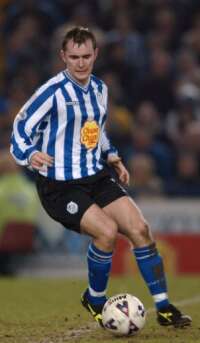