Olivia Godfrey has been succinctly illuminating television screens for over a year in her role as a Sky Sports News presenter and her career portfolio to date has also encompassed the likes of modelling, fashion and entertainment. Of the numerous facets that come together to form her character music is one with consistent relevance, whether it is the deeply meaningful songs she recalls from childhood or a hit from an Australian singer that will remain in her mind for reasons she would rather forget!

English-born but a graduate of UCLA in Los Angeles, Olivia became a recognisable figure to a huge audience when she made the transition from working on the production side to presenting on Sky Sports News in July 2011. Since then she has proved to be extremely well-received by viewers, blending undoubted ability as a host with the much-desired charm that successful presenters exude.

Her CV comprises of so many areas of work, vastly different in some cases but equally impressive with each example. As one of the select few chosen to deliver Sky Sports’ latest stories on screen each day, as well as being a Chelsea supporter and a lover of music, Olivia was most certainly ideal to talk to for the site. Her experience in the fashion world includes working with the press office for Stella McCartney, as well as for Elle at both the London and New York Fashion Week.

Olivia has also modelled for the cover of magazines such as Style and Pulse but there was another moment in her career that she remembers less fondly and she recalled it when I put the question to her of whether she has had to sing in public before.

“I have, and that’s my biggest fear in life by the way! I was modelling once for a very famous photographer and besides having the pictures taken I also had to come up with a song on the spot to sing, which if anybody asks you to do you just can’t think of anything.
“The song I thought of at that moment was one of the most awkward and obscure ones you could ever think of, the Vanessa Amorosi song ‘Absolutely Everybody’. It was terrifying and went very badly, needless to say I didn’t get the job!’’ 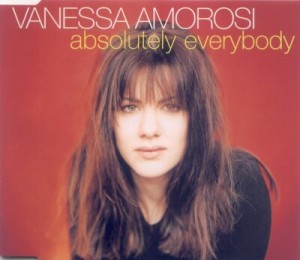 There was a great moment while Olivia was detailing that story when we both recalled the title of the song at the same time and while Vanessa Amorosi’s track (her only hit in the UK thus far) holds a degree of unorthodox nostalgia for Olivia there is much greater depth to her musical taste than the Australian songstress!

“I would say I’m just very affected by music, I’m an emotional person so me and music go very well together. Every song I listen to means something to me, I drive a lot so that helps, and it’s a great source of motivation when I’m working out for example.
“At the moment, let’s see, I’m a big fan of Mumford & Sons, Frank Ocean, also ‘Latch’ by Disclosure is a great song. There’s also a great artist called Willis Earl Beal who’s a soul singer from the US and he recorded his whole album on a Dictaphone.
“There’s not really a genre of music I dislike, I used to listen to a lot of UK garage but now I’m way more into house, although not hard house.’’

As any music listener will agree, there are specific songs that can evoke memories and take you back to a time or place the very moment you hear the first chord or vocal. For Olivia, this could be considered an extremely fitting description as she named the first record she ever had, and it led to another recollection of a song that has connotations with her childhood. 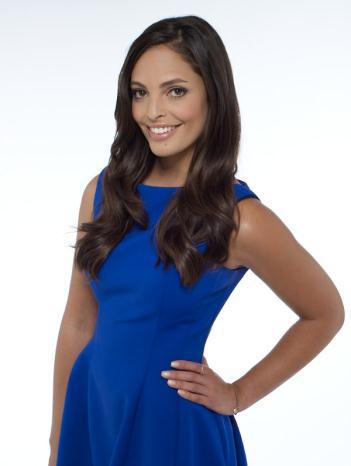 “The first record I had I won it, and it was Bryan Adams’ song from Robin Hood (‘(Everything I Do) I Do It For You’). I also loved the song ‘Senza Una Donna’ (by Zucchero and Paul Young) as I had an au pair who used to play it.
“I love Elton John and ‘Your Song’ is one of my favourites. I was a big fan of Annie Lennox too, but then equally I like songs such as ‘Lollipop’ by Lil Wayne so that tells you a lot about my music taste!’’

As Olivia alluded to, UK garage was something she listened to at one time and it was a mid-to-late 90s / early 2000s scene which was huge for those who enjoyed it both domestically and on the Cypriot resort of Ayia Napa. Although Olivia was not one of the many revellers at venues like Nissi Beach she has been to other holiday destinations linked in with music, and has a long-renowned UK festival she wants to sample in the future.

“I went to Magaluf when I was a teenager with my friends, I went to BCM there, I did that whole thing. I’ve also been to Ibiza a few times and I was going to go to Glastonbury but I was working, though I would really like to go.’’

Olivia’s degree from UCLA was in American and Canadian Studies and her time Stateside has included an internship with Warner Bros. Records. She explains how such an opportunity arose as well as a rather unique and memorable moment that stands out regarding a very well-known duo who stopped by at the time.
“It was an amazing experience and it came about because I was working at Live 8, I was only there for a day but I was in charge of giving out the VIP wristbands. It meant I just got to meet everyone and there was a guy who claimed to be Madonna’s manager, but I didn’t have his name on the list.

“I said ‘I’ll let you in if you give me work experience’ so I emailed him because that was the condition! I got to go to Warner Brothers and it was brilliant, The White Stripes came in and did an album preview to the whole office, which was amazing.’’

It is clear by this point that Olivia has an authentic connection with music and besides hosting the ‘Make It, Break It Awards’ in Liverpool in 2009, a songwriting contest which had Coldplay frontman Chris Martin as one of the judges, she has a fiancée who is a DJ.

“His name is Zeb Wayne, he’s managed by Anglo who also manage Pete Tong and Fatboy Slim. He mainly produces house, but not too hardcore, and he’s a resident DJ at some of the top London clubs with a real vibe.’’

The list of ventures Olivia has been involved in to this point is extremely well-populated, with corporate hospitality, work at sporting showpieces such as Wimbledon and her status as a qualified ski instructor to go with all the others mentioned previously. To have reached the extremely reputable position she now has with Sky Sports News does she believe that having a number of strings to your bow is key to being a success in industries such as media and broadcasting?

“I think persistence and determination are key elements. I started in fashion when I was so young and sort of fell into it and although I liked it I didn’t necessarily see it as my goal.
“I had the chance to do some presenting and to then work in sport which I love the most. I’ve done a number of PR and office roles in the past and I think it really helps to try things.’’

Of course viewers may only get to see the Sky Sports News presenters on the television for a small part of the day but for a channel that runs for 24 hours, seven days a week this naturally means that there are sacrifices for the team who work in front of and behind the camera. 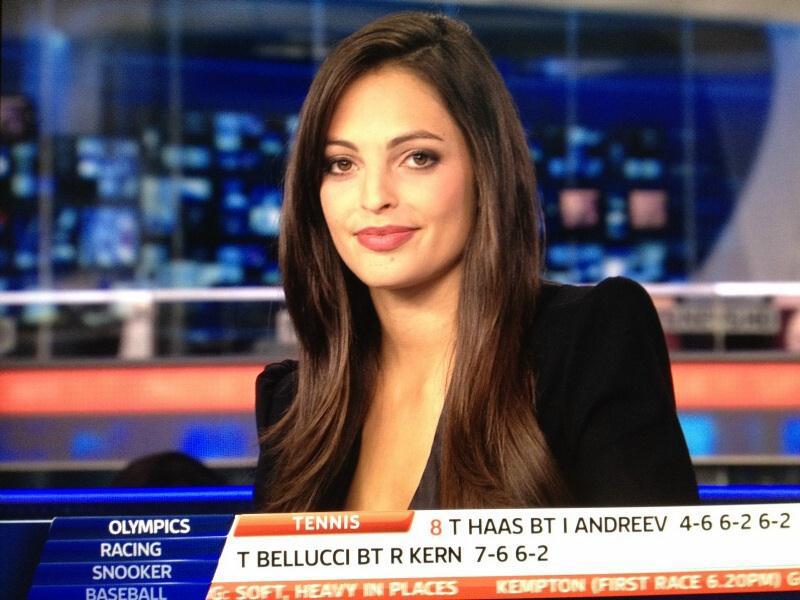 “Firstly, I absolutely love my job, it’s the best thing I’ve ever done. My whole life has changed but luckily I love it.
“I work shifts so I’m in bed early every night and up at 3 most mornings, as well as working on weekends and on Christmas Day for example. It’s a complete overhaul of your life in that sense but it’s a great industry and if you’re going to work in it there’s none better than Sky.’’

It could be suggested that a highly significant part of a presenting job is being able to adapt at times and this is heightened all the more on an outlet such as Sky Sports News. Olivia describes how she feels when the camera is rolling and also when developments occur in the sporting world and she is one of those tasked with communicating that message to a very large audience.

“Every day there are moments when you have to think on your feet, people think that you’re just reading from an autocue but it’s live and when there’s breaking news, a manager has been sacked for example, you have to react to it. It’s a big adrenaline rush and it’s fun but it’s tough.
“We had Jess Ennis in recently, the face of London 2012, and you have such great access to great people. You’re also essentially representing a brand though so there is a certain amount of pressure, but it’s good pressure.’’

Many of the Sky Sports presenters are known for the football clubs they support, for example, Natalie Sawyer (Brentford), Simon Thomas (Norwich City), Charlie Webster (Sheffield United) and David Garrido (Sheffield Wednesday). Olivia follows Chelsea and she got on board with the feature I always end these interviews with, although I had to adapt it slightly in this case of course. I usually ask the players to choose a 5-a-side team of the best teammates they have ever worked with, but with Olivia I asked for this line-up to contain the Chelsea players she would select from her lifetime. There have been some very intriguing selections on here in the past but Olivia’s would be very interesting to watch, not least for the fact that she did not want to have an orthodox goalkeeper in her team!

“I think I’d have to go for players who are quite nimble like me and particularly good on the ball so I’d probably have to leave out players like (John) Terry, (Didier) Drogba and Kerry Dixon. As it’s 5-a-side I’ll choose Ashley Cole and he can double up as a defender and a keeper because I think he’s good in goal as well.
“I’d have Ruud Gullit in there for his presence and because he’s so good on the ball, a legend. (Juan) Mata because although the likes of (Eden) Hazard and Oscar have been great lately I think he makes Chelsea tick and he’s the man of the moment.
“Gianfranco Zola would be in there for the goals he’d score, and who would get the last place? There’s obviously players like Lampard, I think I’d choose Marcel Desailly though as he was an absolutely great defender.’’