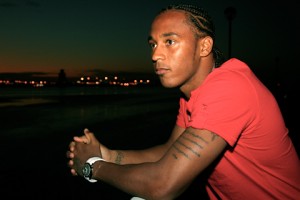 Midfield man Neil Danns has been one of the main components in Sven-Göran Eriksson’s new-look Leicester City team lately, and while football is of course number one, making music is a love that remains constant for him.

The 28-year old joined the club in the summer after three and a half years at Crystal Palace and his music was already catching the eye when he was an Eagles player.

“I’ve done about seven tracks so far,” Neil said. “Hopefully there will be a little mini-album that will be released on iTunes.”

His collaboration ‘Summer Flowers’ with former Arsenal youngster Ryan Smith, also once with Leicester, was featured on Saturday morning TV programme Soccer AM in the 2009/10 season when Neil was a guest.

The video was produced and edited by Neil who has harnessed these skills while studying at the London Academy of Media, Film and TV and 2010 was also the year of his first release on iTunes.

‘Survive’ saw him link up with KOF, an acclaimed artist who is currently seeing his reputation grow by the day, performing this week in Radio 1Xtra’s Live Lounge on Trevor Nelson’s show.

Neil’s father has also been a musician in the past and from he and his mother, Neil experienced an upbringing surrounded by diverse music, nourishing his appreciation of many genres and providing some of the inspiration seen in his own material today.

“To be honest I was really young when my Dad was making music but the stuff he listened to influenced me a lot. He listened to a bit of everything, from old school Motown, to newer r&b, to even Gloria Estefan.

“His taste in music was massive for me. The music I was brought up with means that I’m open-minded about my own stuff, I don’t set myself boundaries when I make it.”

Neil’s vocals possess a clear amount of soul and although still in many ways in its infancy, his guitar-playing ability is in evidence in his acoustic cover below of Beyonce’s ‘If I Were A Boy’.

On the field, the former Liverpool youth featured in the Premier League for Blackburn Rovers before loan spells in what is now League One with Blackpool and Hartlepool United in the 2003/04 season.

Leaving Ewood Park, initially on loan, he joined Phil Parkinson’s Colchester United and hit 12 goals in all competitions in his first season at Layer Road.

Promotion was achieved the following campaign and Neil scored eight times in the league, as well as registering a superb total of ten goals in cup competitions.

Steve Bruce moved to sign him for Birmingham City in 2006 and the midfielder played his part in the Blues’ immediate promotion back to the top division.

In January 2008 he moved south to Crystal Palace where he would experience the play-offs from a watching brief (due to injury) and two relegation battles, none more unique or nerve-shredding than in 2009/10 where the team survived in a final day ‘winner takes all’ clash with Sheffield Wednesday.

As the mathematics dictated, Palace who had been deducted 10 points for re-entering administration stayed up over The Owls with a 2-2 draw at Hillsborough, although Neil missed out through suspension.

After 20 goals in 114 games for the Selhurst Park club he chose to join Leicester City this summer and as a key player in the early throes of 2011/12, music has of course taken a bit of a back seat recently.

“At the moment with the season starting obviously that is my main priority. As it moves along I’ll be able to get more involved in other stuff, hopefully releasing some things in the next couple of months.

“With football coming first obviously it’s hard to take the music too seriously but it’s something that allows me to relax and chill. If people like it then that’s great.

“I’ve talked to a few producers and maybe in future I’ll look at a publishing deal that can allow me to do something more like songwriting.”

The music Neil has so far put out is intriguing to say the least although like everyone there was a time when he was a youngster buying his first record, and the mention of it raises a laugh between us!

“The first record I actually paid money for was Kris Kross ‘Jump’, that’s taking it back a long time now!”

The Atlanta rap duo of Chris ‘Mac Daddy’ Kelly and Chris ‘Daddy Mac’ Smith were an early 90s teen act known for wearing their clothes backwards, and are now 33 and 32!

Singer-songwriter Ed Sheeran is arguably the man of the moment in UK music and Neil has got to know ‘The A Team’ performer personally.

“I went to one of his Liverpool gigs and we had a brief chat. When he did another gig in Liverpool, a sell-out one, he got me on the guestlist and I got to go backstage and all that.

“He’s a top man and I’m a massive fan, his sort of music is the stuff I strive to make. The way he blends urban and indie makes him the most exciting artist at the moment and I’m sure he’ll go on to be massive.”

Neil’s home city of Liverpool has a musical heritage that will forever be recognised the world over for a certain four-piece but he cites the 90s band Space as his favourite Scouse band.

One of their best-known songs ‘Female Of The Species’ had its popularity boosted by being featured, amongst other places, in the theme tune of well-loved UK drama series Cold Feet.

“The Beatles were huge for Liverpool as everyone knows but Space were a band I really liked.”

The urban scene is however one that does not quite manage to thrive in the city when compared to other places in the country, something Neil hopes will change in due course.

“I always keep an eye on the music scene back home but urban music in Liverpool doesn’t get much chance. It needs someone to open the doors and I’m sure once one makes the breakthrough there’ll be more to follow.

“KOF is a big one to watch, Janiece Myers too. Also Spyder who’s a cousin of mine, some of his stuff is really good so he’s definitely one to look out for.”

Neil had the opportunity to try his hand at interviewing close to home when at the Wirral’s 2010 Sunset Festival, reporting for MESH Culture.

There with his friend Jernice and her brother, Neil got to talk to two of the UK’s premier acts Example and Tinie Tempah, tieing in nicely with his video editing and production course mentioned earlier.

“I was doing the video editing and we took a camera and equipment down. I’m into my media and I thought it would be good experience, we just did it by being a bit cheeky asking to speak to people like Example and Tinie Tempah.”

As it happens, he is not the only player at Leicester who likes to play music, although he has never decided to play his own material in the Foxes changing room before a game.

“Darius Vassell plays guitar and there’s a YouTube video of him and a young lady doing an Alicia Keys cover, so he loves to get involved in that. I wouldn’t play my music in the dressing room but they’ve all heard it with it being on YouTube.

“Before games you get r&b, hip-hop, dance, house, more up-tempo sort of stuff because you wouldn’t want anything too emotional before you go out there! Some of the old Irish music like really country sort of stuff some ex-teammates used to play wasn’t my cup of tea, but each to their own!

“Footballers have a lot of free time on their hands so I think you’ll see a lot more starting to come through with making music.”

With regard to the day job, Neil has featured heavily this season in a Leicester squad that made 12 summer signings, garnering attention for the names and the money spent.

The Foxes are many people’s pick for promotion and lie 10th after six games hosting early pace-setters Brighton & Hove Albion this Saturday.

“For me it’s gone well, I’ve been involved in every game so I can’t complain. With the names and the quality in such a big squad that’s a sign I’ve been doing the right things.

“Promotion is definitely the aim for everyone and as long as we show the footballing quality we’ve got throughout the squad we’ll be there or thereabouts.”