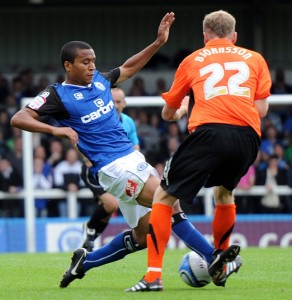 Togetherness served Rochdale well in League One last season, but there appears to be a fairly clear divide when it comes to the music in the team, as left-back Joe Widdowson has noticed!
The former West Ham youngster in his second campaign at Spotland was a standout performer at the weekend as the team registered a much-needed 4-2 win at local rivals Bury.
His corner was dispatched by Marcus Holness to put Steve Eyre’s side 2-0 up after just 10 minutes and the victory was Rochdale’s first of 2011/12 in the league.
As an ever-present in the season’s nine games thus far and an avid music fan, Joe is certainly in a position to discuss the dynamics of the team’s music taste.
“Most of the young lads like similar kinds of r&b, rap and hip-hop tunes but the older guys are not too keen! They prefer their old school ‘real’ music as they call it, Gary Jones and Dave Lucas spring to mind!”
Indeed goalkeeper and coach Lucas was described in an interview for this blog by his former Sheffield Wednesday captain as ‘definitely an Oasis kind of guy’, although Joe is not necessarily averse to this kind of vibe.
“I’m partial to most genres and like to listen to most things. My favourite genre of music is r&b, I also like hip-hop, house, rap, grime, pop, gospel, indie and jazz music.
“My favourite artists are people like Drake, J. Cole, Jagged Edge, Chris Brown, Wretch 32 and Guvna B. I don’t like techno or heavy metal music.
“I think the first album I bought was Usher ‘8701’ when I was about 10 or 11. The first single was Shaggy ‘It Wasn’t Me’, I’ve always been more of a downloader though!”
The 22-year-old Forest Gate-born defender began his career at West Ham, representing Rotherham United on loan in 2007/08 and Grimsby Town the following season, cutting his professional teeth in League Two with both clubs.
“I wasn’t really involved with the first team much (at West Ham) but all the young lads were into their grime and funky house. At Rochdale it (the music in the changing room) changes from game to game depending on who has their iPod.
“We like to rotate and see what everyone’s musical tastes are like, and who has dodgy tunes to hide!”
Although it would be foolhardy to dismiss the footballing education he gained as a youth with the Hammers, perhaps his most memorable moment at the club came in July 2008.
A 19-year old Joe lined up directly against David Beckham in an MLS All-Stars game in Toronto, playing the full game and putting in an impressive display against the former England skipper. 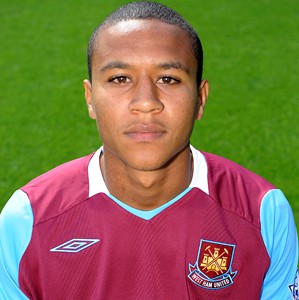 Coming up against a player, regardless of his global fame, (easier said than done with Beckham!) who is one of the very best of his generation for outstanding technique and precision must have been an interesting challenge for the youngster marking him.
“It was a great experience to play against a player with such quality and stature within the game. I just tried to enjoy the game as much as possible.”
So, when he has a delivery Postman Pat could only dream of how do you go about marking Beckham?!
“I closed him down quite quickly early on in the game, then he started drifting all over the pitch to pick up the ball and show his range of passing. He is the best opponent I’ve faced in terms of his movement off the ball and the positions he moved into.
“We spoke during the game and he told me that I played well at the end, which was nice. He was very polite and friendly.”
After departing West Ham, Joe signed permanently for Grimsby after his earlier loan stay and although impressive as the Mariners survived League Two relegation in 2008/09, the club could not manage it the following year.
Rochdale manager Keith Hill signed Joe for 2010/11, the North West club’s first season out of the bottom tier of the Football League for 36 years.
Dale impressed many and far from battling relegation back to the division they had spent almost an eternity fighting their way out of, they finished 9th, just three points and goal difference shy of a play-off berth.
Joe registered 38 appearances in his first season with the club and it was naturally a proud one for all concerned.
“Last season was fantastic for everyone at the club, we performed very well but just fell short of reaching the play-offs at the end. There was a great team spirit and understanding in the group and everyone was fully committed to the management and each other.
“Having arrived from a team that had been relegated the season before it was great to be part of a successful team.”
The success undoubtedly heightened interest in some of the personnel involved and gaffer Hill moved up to the Championship with Barnsley, signing defender Scott Wiseman and midfield man Matt Done from Dale for his new club.
Striker Chris O’Grady, now with divisional rivals Sheffield Wednesday, has also been missed so far this season as the team have lacked punch in the final third, as well as at the other end.
Sitting 21st in the table, improvement in order to scale previous heights again (at least) is the objective both for Joe and the team as a unit under successful former Manchester City youth team manager Steve Eyre.
“I think I’ve been OK so far this season, I’ve had some good games but can definitely reach a higher level. I think we’ve played nice football at times but we need to be more clinical when attacking and be a lot tighter defensively, we’ve conceded far too many goals this season.
“Hopefully we can improve our form and try to emulate last season and maybe go one better by reaching the play-offs. From a personal point of view I’d like to play as many games as possible and play consistently well.
“I also want to chip in with a few more assists and hopefully a couple of goals!”
It is always intriguing to hear the interests the players have outside of the game and not content with being a Southerner in Greater Manchester, Joe is learning another new language!
“I’m learning French and I want to study something else this season. I also like my music a lot, reading, computer games and cooking.”