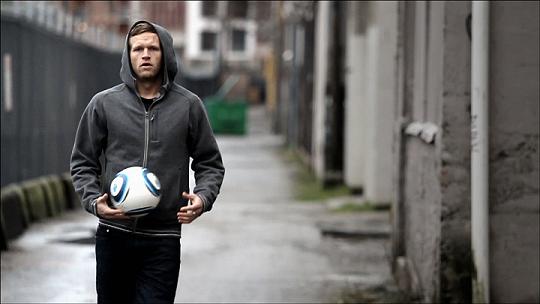 USA international defender and former Watford captain Jay DeMerit transcended the barriers that so often hold back potential professional footballers, breaking through numerous setbacks to paint a true tale of persistence overcoming all.

The notion that instantly enters the thoughts when detailing his elevation from Sunday league bench-warmer to World Cup star is always that of a Hollywood script, indeed many use this to illustrate his story, and it is certainly applicable.

After a fantastically unprecedented Stateside reception to the documentary, the film is to be screened across cinemas in the United Kingdom later this month, and whether football fans or not, the narrative is sure to hit the mark with audiences.

In addition to the story’s most prominent theme, the meteoric rise of DeMerit’s career, there are other underlying subjects that supplement this to make a captivating viewing experience.

From the moment early on in the film back in DeMerit’s native Green Bay, Wisconsin, we see just how radically different the sporting mindset towards soccer (as I’ll call it in this case to avoid confusion!) is when compared to England.

Of course it is no secret that soccer is fundamental to so many in the UK and yet so much further down the pecking order in the United States, but to see where he comes from is important viewing in this case.

To hear how his family and friends felt and thought about his decision to leave for England at 21 further emphasises just how colossal his quest to the top has been.

Along with Ranko Tutulugdzija (a school friend and ex-teammate of DeMerit with a fascinating story of his own), Nick Lewis (a California attorney who met DeMerit at college) directed, co-wrote and produced the feature and he explains how the concept was born.

“I actually came up with the idea,” he said. “I’m not saying that to take credit because people had explored a feature film before however around seven months before the 2010 World Cup I called Ranko and said that we need to make a documentary, and do it now.”

“When I talked to Ranko about it he agreed and called Jay the next day, we pitched it to him and he was a bit hesitant but ultimately realised it was a story with a bigger meaning. He was also interested in hearing what others said along the way, that is how it all came about.

“Ranko and I actually had a professional director lined up but he had some family issues and couldn’t do it at the last minute, so we were forced to do it or let it fade away. We jumped in without really knowing exactly what we were doing, we knew enough about Jay’s story and the game though to start, and from there we never looked back.”

DeMerit talks of how at 16 he decided to try to make it in soccer and his college team coach at UIC asked him to play in defence, a position he had learnt the principles of from basketball but had not yet played in when it came to soccer.

After going on to play in the reserve team at the Chicago Fire it then seemed his hopes were slipping away so he made the ultimately life-defining choice to seek the dream with his English friend Kieren Keane.

Together the two friends went to Europe, DeMerit with around $1800 to his name, and had former Arsenal and Fulham scout Henry Weatherly print up their CVs on Fulham-headed paper.

After laminating their references they set off with their backpacks to clubs all over Holland and Belgium with interesting tales to tell at the end of it, but no luck in securing a contract.

The two stars of this ‘buddy story’ as it was to begin with, then went to live with Kieren’s family in a homely and welcoming yet crowded household in London, his mother Virginia accepting DeMerit as a ‘fifth son’.

While taking on odd jobs they played for semi-professional Southall Town, being picked up for games in coach Dennis Bainborough’s van from which he sold ladies’ underwear!

Countless trials and broken promises continued to come, including one such incident where after a four-hour drive to play for Oxford United reserves they both came on in the 87th minute before being told: ‘we’ll call you’.

DeMerit returned home after the first year, borrowing money while looking for work, but he felt that his destiny had not even begun to be fulfilled and so he went back to England once more.

While playing for Northwood FC, he came up against Championship side Watford in a pre-season game, marking Icelandic striker Heidar Helguson, and impressing Hornets manager Ray Lewington enough for him to hand him a trial at Vicarage Road.

After grasping his chance against Real Zaragoza in a friendly Lewington signed him, and we then see what I believe is a wonderful touch, the email he sent to his college teammate Peter Viña at the time, which he still has to this day.

A landmark in DeMerit’s rise was the 2006 Championship play-off final where Watford beat Leeds United 3-0 at Cardiff’s Millennium Stadium to win promotion to the Premier League, a game in which he was ‘Man of the Match’.

His manager at that time Aidy Boothroyd makes the comparison to Rocky Balboa when describing him, and it is understandable both for the battle-hardened manner in which he plays and of course the storyline.

The trailer for ‘Rise & Shine’

In the section of the film at the 2010 World Cup in South Africa we see ‘The Jay Cam’ behind the scenes with the likes of DeMerit and his US teammates such as Bolton Wanderers’ Stuart Holden.

National team coach at that time Bob Bradley gives the perfect praise when he says that the defender, who played in all of his country’s four games at the tournament, epitomised the US team’s hard work to get there.

The ‘Rise & Shine’ section of the film’s title was the source of some intrigue for myself so I asked director Nick how that came to be.

“It was actually Jay’s idea, our original idea was to call it ‘A Story That Needs To Be Told’ because we thought that was the most appropriate name to go with Jay’s incredible story. However some thought it didn’t work, in hindsight it didn’t, so we kicked around a lot of other names.

“Jay is a creative person who actually studied design in college, he came up with the name and we all kind of knew it was the one.”

After an overwhelming response in the States, the film is to be shown in a huge amount of UK Odeon cinemas on the 17th and 29th of this month (the full list can be viewed here).

The initial response has simply astonished Nick, making all their efforts in producing such an impressive feature worthwhile.

“Honestly the response is something we never could have imagined. People really seem to love the film, people such as players, coaches and athletes as well as people who have said they don’t usually watch sports.

“We have had coaches call and email and let us know how inspired their team was after watching it. Some of the emails we get have almost brought me to tears, from people in other countries trying to do what Jay did, from parents, teachers and on and on.

“The film was screened in approximately 140 theatres in the US and although we had no real ad budget still got a great turnout.”

I have followed Jay’s career since his early days at Watford and even though I have read about his rise before and seen him play live I can truly say that I learnt plenty more from this film.

It genuinely reveals so many hidden details and intricacies about the story of the current Vancouver Whitecaps captain and there is humour to add in to the mix to provide such a unique charm and appeal.

The certificate is a ‘U’ and Nick describes what he believes makes it something that young and old, from all backgrounds, will enjoy.

“What makes it appealing is the message that anything is possible. So many would say something like this isn’t possible but it is and Jay proved it.

“On top of that it is a great adventures story, one of friendship, risk, loyalty, and an amazing cast of characters who are articulate, funny, and believe in Jay’s story. We were truly blessed to have so many athletes, coaches and others be involved in this film.”

It is not often that you stumble upon a tale such as this, to fascinate and inspire you, as Jay DeMerit himself states: the bigger the risk, the bigger the incentive.