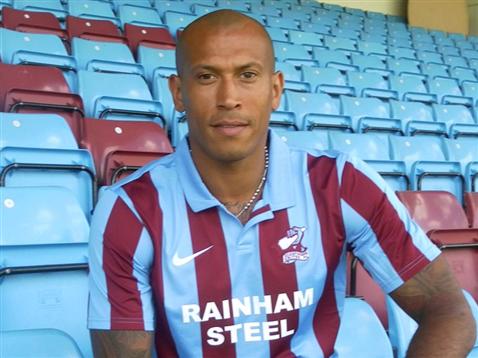 A great number of defences over the years have had to contend with an arduous physical battle when facing Chris Iwelumo so it is perhaps all the more surprising what the Scunthorpe United frontman reveals as his most-loved pastime.

Since he took to the pitch as a teenager with St. Mirren, the Scot has enjoyed a long and rewarding career in the game. Along the way for Chris, 35, has been European and international football, as well as four promotions and over a century of league goals. A Premier League player in his time with Wolves, he helped fire Stoke City, Brighton and Colchester United into the second tier and League Two Scunthorpe are the current beneficiaries of his presence and poise.

Last Friday, the former Charlton, Burnley and Watford man scored his second of the season to seal all three points for Brian Laws’ side at Southend United. It was the Iron’s first win since the opening day and it pushed them up to 11th in the table. As one of the elder statesmen in the squad, the onus is on Chris to offer his understanding to the younger players and he is progressing gradually with his coaching qualifications. This has of course taken up a degree of his free time and he discusses it alongside a wholly different interest which might catch more than a few people by surprise.

“Coaching’s good, I don’t think I’ll do my (UEFA) Pro Licence until I’m actually in a position in a few years time. I’d say that’s kind of the only thing I do (in terms of ventures) but what somebody wouldn’t know about me – I like my opera, which is a bit bizarre, I don’t know if I should tell you things like that!
“My godparents are very big on that and I’ve always spent a lot of time with them so it’s something that kind of rubbed off on me.”

As one of the more imposing striking performers the domestic game has seen over the past decade or so, the thought of Chris taking in a classical performance of such proportions may be a little difficult to imagine at first. However, sounds to stimulate the senses are very valuable to him regardless of whether it’s time to travel, prepare for a match, or wind down.

“Music’s massive, depending on your mood and what you’re listening to, but music’s definitely one of these things that always gets you up for it. It’s always going on, in the background, in the car, so it’s massive.
“I listen to a little bit of everything – love Ed Sheeran, Lil Kim, Joe, there’s a wide range. I love all the Ministry of Sound so I have a very varied kind of mixture.”

A four-cap Scotland international, Chris has worked with Iron manager Brian Laws previously, when he signed for Burnley in 2010. He was earmarked this summer as someone who could bring invaluable qualities to a group of players hoping to turn around the club’s fortunes and head back towards League One sooner rather than later. Also among Laws’ pre-season recruits was an ex-Carlisle United winger who featured in the top flight with Sunderland. As Chris describes, he is one of those with something to offer when it comes to identifying the tracks to get the fire burning in the players’ hearts as kick-off begins to approach.

“I’m trying to think whose phone goes on before a match because it’s the same phone that goes on every time. It’s the same playlist we listen to, it’s not too bad, me and Andy Welsh were actually talking about it after a game recently.
“He’s got quite a varied selection as well so it’s good.” 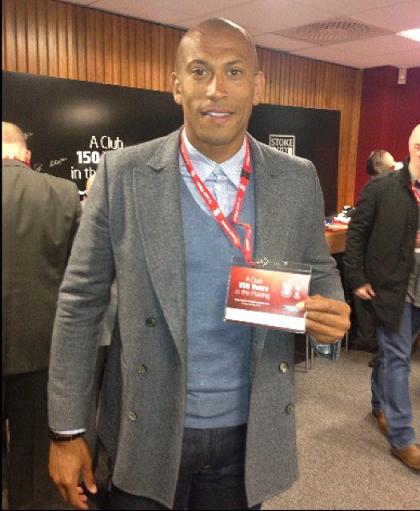 Scunthorpe are the 16th club Chris has represented and this has meant a huge amount of diverse characters and ways of thinking for him to mix with. Different loves for music also come as part of this and in the last two seasons, though he had loans with Notts County and Oldham Athletic last year, Watford were his full-time employers. Since Giampaolo Pozzo took over the Hornets in 2012 there has been a throughput of loan signings from his other clubs Granada and Udinese. Chris recalls his Vicarage Road spell most vividly when thinking of intriguing or unusual music tastes he has come across in his career.

“At Watford, a lot of the Italian boys who came in and even some of the African boys were a wee bit out there! I’ve put my phone on every now and again (in the changing room), it doesn’t last very long!
“I’d say at Watford it was Troy Deeney, he was the music man and he used to bring in some CDs for the boys.”

As even a relatively casual music fan would admit, some songs can be ever so powerful in taking you back to the time and place in which you first heard them or enjoyed listening to them the most. In the interviews on here, players are asked for the first record they ever bought and even though the name of his eludes Chris it still manages to evoke strong memories of the scenario that concerns it.

“Well I never bought it, I actually cut one of my neighbours’ gardens and he gave me a CD. I can’t remember the name of it but that got battered, I listened to it many times through.
“That was back in the day, I’d have been probably eleven.”

Since those days there have been more new beginnings and memories than he could surely have ever imagined. A departure from first club St. Mirren in 1998 heralded an opportunity with Aarhus Fremad in Denmark and he had a welcome he will understandably never forget, being picked up on arrival by the club’s owner and his model daughters!

Four years after leaving Denmark, and with hugely memorable promotion-winning stays with Stoke City and Brighton in between, he ventured abroad once more. The German agent he had brought in while with Aarhus Fremad got him a move to Alemannia Aachen in 2004 and although his time in the 2. Bundesliga lasted just a few months it had its upsides too. The club had been beaten by Werder Bremen in the previous season’s DFB-Pokal final meaning that they qualified for the UEFA Cup, facing the likes of Lille, Sevilla, Zenit St. Petersburg and AEK Athens en route to the knockout phase.

Although the most celebrated moments of Chris’s career have been while playing in England there is no doubting just how beneficial his European endeavours were in helping to shape the player and character he is today.

“You’ve got to remember, when I went to Denmark I was 19 years old and I went there with a holdall with a PlayStation in and my clothes – that was it. TV was English, cinema was English, everyone spoke amazing English so that made it easier for me.
“I think once you do something like that you can go anywhere in the world. Germany was a little bit harder because I’d say only 60 per cent of the squad spoke English but it’s one of those things.
“I had Danish and German tutors, Germany was a bit more difficult but I loved both experiences.”

Still only 26 when he returned to the English game with Colchester United in July 2005, Chris then showed the kind of form to back up the assertion that all the challenges of his overseas spells were worthwhile. He explains what stands out to this day as being the biggest lessons he took from a career perspective.

“I think how football is put to players, especially in Germany. It was a very good standard, there was no stone unturned with the formations and how players were taught football and coached.
“It was a massive learning curve for me and I became a better player for it, definitely.”

Chris started up front for Stoke at the Millennium Stadium in May 2002 alongside goalscorer that day and his current Scunthorpe teammate Deon Burton as the Potters beat Brentford 2-0 to win promotion to the second tier. Two years later, he was celebrating in the very same setting while on loan with Brighton. In the Division Two play-off final against Bristol City he won the decisive penalty for Leon Knight to convert and send Mark McGhee’s side up to the newly-named Championship.

A two-year spell with Colchester brought him yet another promotion from the third tier, this time automatically as runners-up in the 2005/06 campaign. His 37 goals for the Layer Road club were pivotal in launching them into the Championship and then helping them to an impressive 10th-place finish the following year.

He has lead the line at Charlton, Burnley and Watford in recent seasons, as well as having loans with Bristol City, Notts County and Oldham, but two years with Wolves included a career high point. He was a big favourite at Molineux and the 14 league goals he got in 2008/09 to go with strike partner Sylvan Ebanks-Blake’s 25 delivered Premier League football. 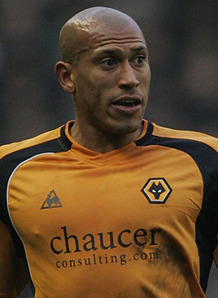 While at Wolves he scored twice in a 4-1 home win over Sheffield Wednesday in August 2008. On that day, current Iron teammates Deon Burton and Sean McAllister were on the other side, as was goalscorer Etienne Esajas and manager Brian Laws. Laws signed Chris for Burnley and he has now brought him to Glanford Park to add goals and to help along the club’s young players, including strikers Sam Winnall, Jamie Wootton and Matt Godden for example. Before Chris gives some honours to a select few of his career teammates how does he think the Chris Iwelumo of today really differs from the teenager who was once starting out at St. Mirren?

“Just experience. All these players coming through, everyone says they’re raw and they can go one of two ways.
“I was very lucky that I had some good coaches and a lot of luck along the way as well. I think you know the game and it becomes instinct and I think that’s definitely something that’s put me in good stead.”

Even though his winner at Southend last Friday is a reminder of what he still brings to the table it is time for him to have a look back at the best colleagues he has stepped out onto the field with in his career. The way this regular question works is for the player to place themselves in a 5-a-side team alongside four of the most impressive teammates they have ever had. As Chris could not choose between the Irish and Dutch international midfielders he selected it can only mean that he must take up a place on his team’s bench!

“I’d put Ed de Goey in goal. He was a legend, a funny guy, the funniest-shaped goalkeeper but unbelievable!
“I’d have Andy Reid (midfield) in it – just different class. Peter Hoekstra (midfield), of course.
“Defender would be Sergei Shtaniuk at Stoke. He was like Ivan Drago, he was on the treadmill with all the things on him and they were trying to batter him and it wasn’t even changing! The guy’s a machine – ‘I must break you’.
“Striker? God, I’ve had some good ones.
“I’ve got to say probably Jamie Cureton then. Me and Curo clicked really well but me and Sylv (Ebanks-Blake) did, me and Leon Knight did, so I’ve had some really good partners in my time.”

Stay on track with Beats & Rhymes FC – follow every interview