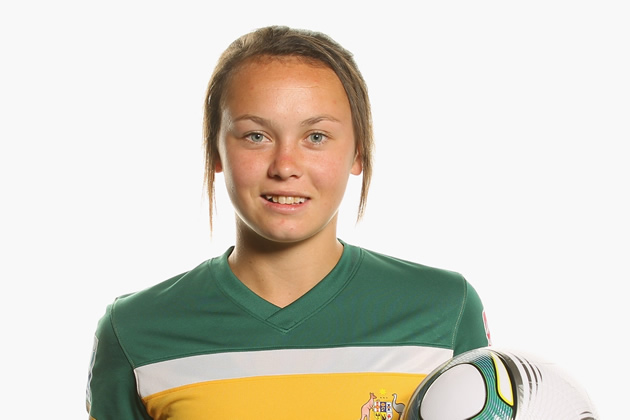 Sky Blue FC’s Caitlin Foord is indicative of the emerging talent that is primed to be the beating heart of the Australian women’s national team for years to come and there is a specific vibe of music that ignites the mood for the right-sider and her young Matildas counterparts.

Two years ago, the Illawarra native’s ability was on show for audiences across the world to see as she helped the Matildas to a quarter-final place in the FIFA Women’s World Cup in Germany. What made her acclimatisation to the big stage even more impressive was the fact she was only 16 years old, winning the Best Young Player award for the tournament. Now still only 18, she is preparing for the opening weekend of the National Women’s Soccer League in the US after joining up with forward and fellow Matildas star Lisa De Vanna at Sky Blue FC in New Jersey.

Music has an undoubted role to play in the preparation for national teams from far and wide, including the Australian squad, as explored on here previously with captain Melissa Barbieri, midfielder Emily van Egmond and the aforementioned De Vanna. There is a real sense of togetherness about the Matildas and it is clear to see with how the various personalities in the squad support each other. This is an ideology that runs throughout the ranks but it can also be seen in the way the young players identify with each other. Caitlin is closely connected to her fellow emerging gems in the national set-up and they share much in common, including the music they enjoy and tune into as the minutes go by in the lead-up to kick-off on match day.

“I think music plays a big part in all of my teammates’ preparation for a game. With Matildas, everyone on the bus has their iPods in listening to music to and from training and games.
“Once we get into the change room, someone puts their iPod into the speakers. We normally make a playlist before a tour, everyone sends in their favourite song and they’re generally the songs that get played in the changing rooms before games.
“There is a mixture of music in the playlist but it keeps everyone happy.’’

In late-January, Caitlin was an integral part of the Sydney FC team who defied expectations to go all the way to Grand Final glory in the W-League. Her reputation in the women’s game has risen in recent years and she previously had the opportunity to join INAC Kobe Leonessa in Japan but the move did not materialise with school commitments back home still to take care of. This year also presented opportunities to take on a new challenge abroad, with offers from England and Sweden coming in.

The lure of being part of the new NWSL was the strongest attraction for Caitlin though, with other Australians and close friends in the league one of the principle factors behind the decision. She has linked up with 2009 Women’s Professional Soccer championship winners Sky Blue and is joined in the States by Sydney teammates – captain Kyah Simon (Boston Breakers) and forward Samantha Kerr (Western New York Flash). Caitlin also names a midfielder and friend from the W-League-winning side when describing some of the players who are on her level for music taste.

“Myself and a few of the younger ones, Samantha Kerr, Kyah Simon, Alanna Kennedy, are into electric and house music, also old school r&b. I don’t think there is anyone with unusual taste in music, well not that I know of.’’

The first song or album someone ever remembers listening to can in many cases say so much about the music of the time they grew up in. At one point, there were many people listening to the trio Caitlin mentions, even if they would not like to admit it!

“My first album was Hanson ‘Middle of Nowhere’ because I used to love the song ‘MMMBop’ when I was about 7.’’

In the 2013 W-League Grand Final, Caitlin displayed her attacking capabilities early on as she drove at the Melbourne Victory defence, committing players in the process. In the 3-1 win for the Sky Blues they faced Matildas keeper Brianna Davey in the Victory goal and she is someone who sprung to mind when Caitlin discussed the tradition here in England of singing in front of teammates.

“I have never had to do that and hope I never have to! I have seen Brianna Davey from the Matildas sing in front of a few of us – she has a really good voice.’’

It feels as if Caitlin has been making her way at the top level for a long time but it is easy to forget she is still only 18. Moving to a new country has been a big step for her with this switch to Sky Blue and teammate Lisa De Vanna talked on here about the role she can play in helping Caitlin to settle away from home this season. The challenge of the NWSL against some of women’s football’s best is one thing but Caitlin has another matter to take her mind off it from time to time!

“I like a new challenge, meeting new people and making new friends, so it is exciting for me. Yeah it’s my first time living out of home, so far for me it’s the shopping!
“The shopping here is amazing, they have absolutely everything here and it’s so much cheaper than back home. I love it!’’

A right-back / winger who started out as a forward, Caitlin’s on-field career may not have happened at all if it wasn’t for her sister persuading her mother to let Caitlin join a local team. Her earlier playing days include representing Warilla Wanderers and in later years Central Coast Mariners. After the Mariners team folded Caitlin got the opportunity to move to the team she had always wanted – Sydney. Former national team coach Tom Sermanni recognised the talent she possessed and rewarded her with the chance to pull on the green and gold.

Caitlin made her Matildas debut and scored in the 3-0 victory over New Zealand in May 2011, with goals also coming from Kyah Simon and Leena Khamis. The World Cup followed and her performances against the likes of Brazilian superstar Marta in Mönchengladbach, in the 2-1 win over Norway in Leverkusen, and in the quarter-final defeat to Sweden caught the eye. She was on holiday in Italy when she found out she had been named Best Young Player and she then continued to make her mark domestically.

In 2011, Sydney topped the W-League table but lost the Grand Final to Brisbane Roar, with Caitlin playing the whole game in Campbelltown. Last season however the Sky Blues went all the way, overcoming the loss of key players and patchy form to snatch 4th place under Alen Stajcic. After beating Brisbane in the semi-final the 3-1 success over Melbourne Victory at AAMI Park was incredibly sweet. Nicola Bolger, Sam Kerr and Kyah Simon from the penalty spot secured the win and there were key performers all over the team, including Player of the Year Teresa Polias in midfield.

Caitlin is rightfully thought of as one of the brightest stars of the W-League and the national team and just as now-US team coach Tom Sermanni noticed it, so too has new Matildas boss Hesterine de Reus, selecting her in her first team camps. Caitlin may be a premier name in Australian women’s sport but she is also like any other teenager in many ways and in addition to being a fan of surfing she reveals her interests away from football, as well as what she loves about being a Matilda.

“I love going to the beach, I also enjoy catching up with my family and my friends from school. The best thing about being a part of the Matildas to me is having the opportunity to represent my country and travelling the world with my closest friends along the way.
“(The aim is to) keep growing and get better as a team and to do better in the World Cup and the Olympics.’’ It is an exciting time for the women’s game as a whole and there is a lot of anticipation in the air as the NWSL gets underway in the US this weekend. In the eight-team division, Caitlin’s team Sky Blue will open with a home clash on Sunday with Western New York Flash at Yurcak Field. The 5000-capacity venue on Rutgers University’s campus will host the likes of World Player of the Year Abby Wambach for the Flash, as well as US legend Christie Rampone and national team standout Kelley O’Hara among the Sky Blue attractions. Besides forward Lisa De Vanna, Aussie eyes will be on the match-up between the number 4s – Caitlin and her friend Sam Kerr.

Sky Blue coach Jim Gabarra represented the US men’s team at the 1988 Seoul Olympics and he has some intriguing options on the roster to choose from this season. Canadians Sophie Schmidt and Melanie Booth, and Mexican duo Nayeli Rangel and Mónica Ocampo are further examples of the international personnel who will be plying their trade in New Jersey in 2013. The opportunity is an exciting one for Caitlin and although it seems slightly unorthodox to ask an 18-year-old player for the best names she has ever worked alongside it is of course a regular question on here, so it had to be done! Here is the 5-a-side team Caitlin would pick (including herself) made up of her best career teammates so far – two from the US, two from back home.

“Goalkeeper – Brittany Cameron from Sky Blue. From what I have seen from training and games she is an awesome keeper – she seems to get a hand on everything!
“Defender – Christie Rampone. I haven’t played with her much yet but I am looking forward to playing with her at Sky Blue in the upcoming session and I am looking forward to learning a lot from her, she is a world-class player.
“Midfielder – Collette McCallum. She is such a smart player, she hardly loses the ball and is tidy with her touches and passes.
“Striker – Lisa De Vanna. She is so quick with and without the ball at her feet and a good finisher.’’