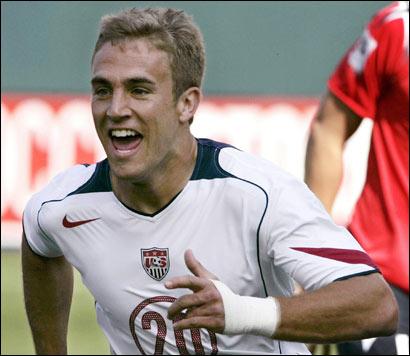 Former USA international striker Taylor Twellman was a hugely prolific finisher throughout the last decade for the New England Revolution and in perhaps a similar way his love for hip-hop has remained consistent.

Taylor, 31, was born in Minneapolis, Minnesota, the birthplace to the musician Prince as well as hip-hop acts including the underground group Atmosphere, rapper and producer Brother Ali, and DJ Abilities who performed with the late MC Eyedea.

Although his liking is strong for the more urban style, it is a certain New Jersey native who also features highly on Taylor’s list, Ol’ Blue Eyes himself.

“Frank Sinatra and hip-hop are my favourite artist and genre,” Taylor said. “I always have and always will be a hip-hop guy, and Frank, is Frank.”

The first foray into music-buying for Taylor was however a slightly different kind of choice from those two in terms of musical style, it was a hugely popular r&b group, also mentioned by Carli Lloyd in this blog’s last article.

“The first record I bought was ‘Cooleyhighharmony’ by Boyz II Men.”

Taylor actually grew up in St. Louis, Missouri, where the list of hip-hop names is headed by Nelly and his group St. Lunatics, with ‘Right Thurr’ artist Chingy and J-Kwon, known almost exclusively for his track ‘Tipsy’, also from the area.

Graduating from St. Louis University High School, the all-round young sportsman chose football, or soccer to clearly differentiate in this case, over baseball, taking up a scholarship at The University Of Maryland.

He represented the Maryland Terraphins in 1998 and 1999 and after scoring four goals at the 1999 FIFA World Youth Championship he made the move into the professional game in 2000 with German Bundesliga team 1860 Munich.

Despite scoring regularly for the reserves over two years Taylor did not manage to break through into the first team and in 2002 he moved to New England Revolution of the Major League.

This was also the year that former Liverpool great Steve Nicol took over as the club’s head coach, a role the Scot is still in today.

Taylor’s inaugural season for the Revs was a barnstorming success as he registered a superb 23 goals in 28 games as the team finished first in the Eastern Conference, eventually losing in the MLS Cup final to Los Angeles Galaxy.

In November 2002 he made his international debut in the USA’s 2-0 win over El Salvador at Washington D.C.’s RFK Stadium, although he would have to wait three years before he got his first goal for his country.

The Revolution actually reached the Conference play-offs in each of the eight seasons he played in, with the 2009 campaign the last of these.

Back to the music and the dressing room choice at the club was certainly to Taylor’s liking, even if the preference of former Revs teammate and US international midfielder Steve Ralston was not quite so.

“The dressing room music was always hip-hop, although nobody in particular chose it. I struggled with Ralston’s choice as country just isn’t my thing!” 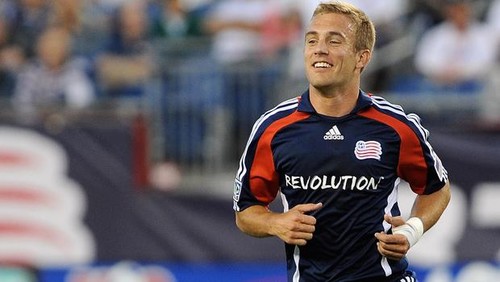 Taylor’s goals-to-games ratio was excellent during his club career and he won both the Major League Soccer MVP Award and the league’s Golden Boot in 2005, as he scored 17 times.

It was October 2005 when he registered his first international strike, scoring the opening goal in a World Cup qualifying clash with Panama as the US triumphed 2-0.

He would ultimately miss out on a place in the squad for the 2006 World Cup in Germany but a hat-trick in a 5-0 friendly win over Norway in California had seemingly boosted his chances.

The 2007 campaign was a landmark one as he reached the 20-goal mark and won his first silverware with the team, the 2007 US Open Cup.

Such a natural talent, Taylor sadly suffered with a number of concussions during his career through heading contact with the ball and most recently after being caught by an attempted punched clearance by the LA Galaxy goalkeeper Steve Cronin in 2008.

He managed two goals in two games (both coming in one of these fixtures) in 2009 but his playing time had become severely hampered by the injuries and he missed out on the 2010 MLS season as a result.

In November 2010, after 101 regular MLS season goals for the Revolution (109 in all competitions), Taylor announced his retirement from the game at the age of 30.

“I was very proud of playing for only one team in my MLS career. I just wish it could have been longer because who knows what would have happened with goals, MLS Cups, etc.”

The Twellman family is pretty rich in its footballing pedigree with Taylor’s father Tim a former player before turning his hand to coaching in 1985.

Tim’s son James was also once with the San Jose Earthquakes while daughter Alexandra represented the University of Richmond.

Along with his father Taylor is involved with Twellman Soccer which gives camps, trainings and clinics to support players and parents alike.

“Twellman Soccer helps all players of all skills to enjoy the game along with helping kids get recruited for their dreams. Also ThinkTaylor.org will be a concussion awareness/education program for kids out there.”

Taylor is now working as a studio and colour analyst with ESPN, as well as analysing for the Philadelphia Union and hosting for CSN New England.

Raising awareness of the seriousness of concussion and its implications is of paramount importance for him too as this not only curtailed his playing career but has also very much altered his everyday life.

It seems appropriate that such a fine forward talent can at least now witness the growing appeal of the sport in the US, given that he gave so much during a career which all those who saw him play know was all too short.

“Right now the MLS is on the rise especially with the TV deal with NBC and I love how soccer-specific stadiums are continually going up.”