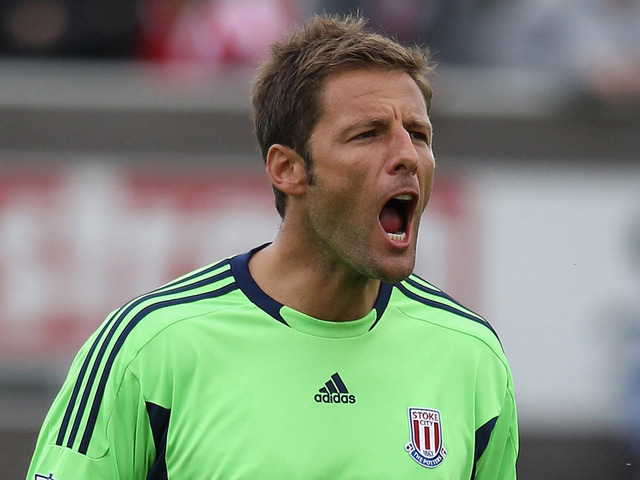 Although his spells as a first-choice goalkeeper in his career have been somewhat sporadic, Stoke City’s Carlo Nash is an experienced name in and around the top level of English football and as a Red Hot Chili Peppers fan he isn’t a big lover of his Jamaican teammate Ricardo Fuller’s tunes.

After his loan role in the latter stages of the Potters’ 2007/08 Championship promotion season, Carlo returned to the club permanently in 2010 after a two-year stay with David Moyes’ Everton.

While the Bolton-born stopper has, like many on this blog, a wide appreciation of different musical genres, the Caribbean vibes favoured by his colleague and former Preston North End hitman were the ones he cited with regard to dodgy music at the Britannia Stadium.

“Ricardo Fuller’s reggae music! It’s sometimes a dance mix (the team has on in the dressing room) and sometimes hip-hop but on the odd occasion Ricardo sneaks in a bit of reggae.

“I have a very varied taste in music from dance to opera but I guess if I was to pick one band I listen to the most it would be the Red Hot Chili Peppers. The first record I bought was ‘Poison’, Alice Cooper and I can’t remember how old I was but it was a long time ago!”

At a towering 6 foot 5, the imposing presence has long been in the armoury for Carlo, but his career once had altogether more humble surroundings than those of the Premier League he has enjoyed for much of the last decade.

Once a young member of the Manchester United School of Excellence, Carlo decided to take a few years away from the game after a car accident, returning when he was 19 with a local team in Bacup.

He remained in his home county with non-league Lancashire sides Rossendale United and Clitheroe before Crystal Palace of what was then Division One gave him his first professional contract.

The Eagles beat Sheffield United in the play-off final at the end of his first season at Selhurst Park thanks to a memorable last-minute David Hopkin winner at Wembley.

Winning promotion to the Premier League was a huge high for Carlo although his starting place he had won from Chris Day during the season was to be Kevin Miller’s when it came to the ill-fated 1997-98 campaign.

He left Palace after their 1998 relegation to return to the North West with Stockport County, featuring on a regular basis under manager Gary Megson and later Andy Kilner.

After a loan period without playing at Wolverhampton Wanderers, Carlo was bought by top-flight Manchester City with boss Joe Royle paying £100,000 in January 2001 for his services.

Despite immediate relegation back to the second tier, City stormed Division One the following season as Carlo battled with Nicky Weaver for the number one spot, playing 25 times in all competitions as the team won the league under Kevin Keegan.

His time at Maine Road interestingly coincided with him being voted as the club’s worst dressed player by his City teammates, although Carlo has his own response to that!

“I always said I was the only one who could pull off what I wore then, I honestly believe there was a bit of jealousy!”

He played 10 times (9 in the league), as the club comfortably adapted to life back in the Premier League in 2002/03, although he was now competing with ‘Great Dane’ Peter Schmeichel for a place.

With the arrival of ex-Arsenal and England keeper David Seaman in the summer of 2003, Carlo moved north to Middlesbrough and the club won the Carling Cup in 2004.

Opportunities were scarce however with Australian Mark Schwarzer very well established in the Boro goal and he joined promotion-chasing Preston North End of the Championship in March 2005. 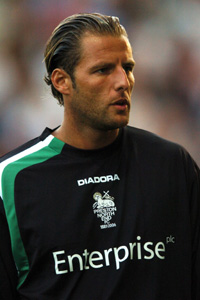 His form for the Lilywhites drew admiration from many observers but began with what Carlo describes as ‘both a high and low point’ as the Deepdale club were beaten to promotion by West Ham in the 2005 play-off final.

In 2005/06 Carlo set a new record for clean sheets for North End with 24 as Billy Davies’ team reached the play-offs again before losing out this time to Leeds United in the semi-final.

His stay at Preston was the most recent sustained period he has had as a first-choice keeper and he moved to Wigan Athletic in 2007, before his loan at Stoke mentioned earlier and then his switch to Everton in 2008.

“At Everton the music was a bit more organised. We listened to the same mix before every game as it seemed to give us good results on the whole throughout the season.

Carlo rates signing for his boyhood team as one of his career highlights and he got his chance in front of the Goodison Park faithful in December 2009 against BATE Borisov of Belarus in the Europa League.

With Everton and Stoke he has watched on as both sides have been beaten in FA Cup finals, in 2009 for the Toffees and latterly this year with the Potters.

For a keeper who has displayed his ability at clubs when given the opportunity, people may wonder if he has ever got anxious at having to sit it out on matchdays on numerous occasions.

“It is extremely frustrating because I know if given the chance to play at certain clubs my career may have been very different in terms of what I’ve achieved. However, that said, I’m grateful every day for the opportunity to do what I’m doing.

“I was brought up in a Christian family with Christian values and I think this has stood me in good stead for whatever life throws at me.”

A particularly intelligent man, Carlo has Italian ancestry from his father’s mother and has been a keen student of languages for some time, linking in clearly with another focus in his life.

“I love and play all sports but obviously football is my passion. My second passion is travelling.

“When my wife and I met nine years ago we both discovered we had the same passion for travelling and we set off at the end of that season on our first adventure together. Nine years later we have been lucky enough to have been to more than 80 different countries.

“About six years ago we decided to bring a series of travel books out based on our specific way of travelling the world and Luxury Backpackers Ltd. was born. Having the advents as a backpacker would with no fixed itinerary, but rather than the usual flee-ridden hostels, we’d stay in small boutique hotels, hence the luxury aspect.”

In the early stages of Stoke’s Europa League ventures this season Carlo has been on the bench in the wins over Swiss outfit FC Thun, naturally though he has ambitions for the future and an admirably considerable one at that.

“To be the first Premiership manager that has been a goalkeeper. I definitely want to stay in football, as I said before it’s a passion!”

Some of Carlo’s favourite songs:

Usher – U Got It Bad