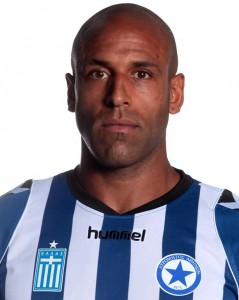 Ex-Stoke City defender Wayne Thomas now features in Greece’s top division and it is fair to say that the pre-match sounds are not a patch on the efforts of a certain young Arsenal hotshot, and certainly some way short of a seasoned shot-stopper’s unforgettable off-field display!

The 32-year-old who also turned out for Burnley, Southampton and Doncaster Rovers after starting his career with Torquay United describes the change in dressing room music since his move to Athens-based Atromitos FC last year.

“The music’s non-existent, the kit man Nico plays Greek songs on the radio which are terrible and the lads tend to wear headphones and listen to their own stuff thankfully. Back home a few lads would take it in turns to put their iTouches on the speaker for everyone – a few got taken off quickly as well.

“The bad ones lasted half a song tops but some good ones were Gilly (Simon Gillett) at Doncaster, Johnny Ini-Oster (midfielder John Oster, in reference to Barcelona’s Andres Iniesta)…and me!”

Diverse appreciation for musical genres are often claimed by interviewees on here but Gloucester-born Wayne truly lives up to that billing with his choices which include some folk thrown in at the end of his list for good measure. 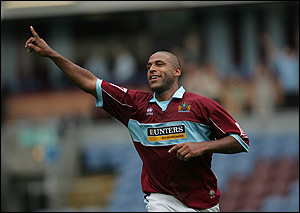 “My musical taste is varied and probably some of it isn’t what you’d expect! I like your standard r&b and hip-hop however I also enjoy classical, ‘Viens, Mallika’ sung by Anna Netrebko and Elina Garanca is a favourite.

“I’m also into progressive and electro house, and grime before a game and I recently got into James Vincent McMorrow and Bon Iver, so a wide range in taste I reckon.”

The former Burnley captain’s first record bought was a 1986 release which was reworked as a dubstep track last year by Nero and also featured as the 2012 soundtrack to Soccer AM’s annual Dance Off.

Wayne’s memory is a touch hazy on the subject of his own singing performances, though secret agents in dark suits spring to the forefront of his mind, nevertheless he has no trouble in recalling the identity of two one-time colleagues’ renditions.

“I think I sung either ‘Men In Black’ or ‘Gettin’ Jiggy Wit It’ by Will Smith when I was at Burnley, or I may have got away with it with a big influx of players. I remember Alex Oxlade-Chamberlain singing an Eminem song at Southampton with his earphones in – that was good.

“Mike Pollitt at Burnley singing ‘Lady In Red’ and even getting the hotel waitress involved, that was different class! He had a spoon for a microphone and all sorts.”

Wayne made his professional debut for Third Division (now League Two) Torquay United, breaking through in the 1996/97 season and establishing his place as a mainstay in the Gulls’ rearguard in the following years.

He moved up a division to the third tier with Stoke City in 2000 for a fee of £200,000 and would win promotion via the play-offs to what is now The Championship with The Potters in 2002.

It was at The Britannia Stadium where he would spend the longest first-team spell of his career to date, making over 200 appearances in five years before switching to fellow second-tier club Burnley in 2005. 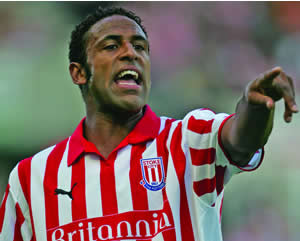 In 2007 George Burley signed Wayne for Southampton for a seven-figure sum but injury beset his progress in his second season with the St. Mary’s club and the team were relegated to League One in 2009.

His last stay (to date) in English football was in South Yorkshire last season with Championship side Doncaster Rovers where he featured 21 times before leaving at the end of the campaign.

After training last summer with former employers Stoke it was his ex-teammate and erstwhile Potters and Burnley frontman Ade Akinbiyi who helped engineer a move to foreign shores.

“There wasn’t a great deal of interest in England, of course a few clubs said ‘yeah we’re interested’, but never got to an advanced stage of actually sitting down with a club, which is a bit hard on you when you’ve been playing well in the Championship the season before! I’m a big believer in karma and positive thinking though and that everything happens for a reason so I don’t like to look back really, just focus on what I want, what I can achieve and what’s coming next for me and my family.”

Akinbiyi set up Players Plus with his former Palace striking counterpart Dele Adebola to assist players in buying and selling cars and homes as well as seeking out moves, as was the case with Wayne.

After putting the idea of a move to Greece to Wayne, Akinbiyi enlisted an agent he knew to push the deal through and in a couple of days Wayne signed for Atromitos.

“Ade’s been a great help, he’s set up his business and also works as part of an agency so he’s doing a lot right now to help players that are in or out of contracts as well as setting up academies to help young talent come through and get into clubs.”

Atromitos are based in Peristeri in the Greek capital and finished 11th last season in the 16-team Superleague Greece, but are challenging for European qualification this time around.

The format for qualification is slightly different in Greece to England and while the league winners go into the Champions League group phase, the teams in second through to fifth battle it out over a play-off system for the second Greek entry into Europe’s top competition.

The Superleague play-off runners-up and the Greek Cup winners go into the Europa League and there is a weighting system for the teams in the play-offs which is relative to their final league position.

“We’re fifth in the league behind Panathinaikos, Olympiakos, PAOK and AEK, there’s just eight games left of the regular season so hopefully we’ll stick in there. Also we’re in the semi-final of the Greek Cup so if as expected Olympiakos make the final from the other tie, the cup winners or finalists go into the Europa League so fingers crossed.”

The gulf in game pace is an obvious transition to acclimatise to for English players venturing overseas so Wayne has had to find a new way to get himself in the referee’s book!

“Personally I think I’ve adapted quite quickly, obviously I’m learning all the time as it’s a different game here, slower build-up, playing out from the back, Swansea-like. The physical side is pretty non-existent which was a big part of my game in England so no big tackles or headers, I’ve only been booked four times so far this season and three of those were for swearing in Greek!”

The playing business is one matter, getting used to an entirely different lifestyle is huge and in many cases too great an obstacle to overcome but Wayne is enjoying his current surroundings and a longer stay could be in the offing.

“So far so good, I was in a hotel for a month but now rent a place in Kifissia which is about 20 minutes from the centre of Athens, it’s really nice and has a great little centre five minutes’ walk from my house. The school is a five-minute drive and training is a fifteen-minute drive so it’s great all round.

“Surprisingly everyone has settled really quickly, my wife has friends from my son’s school as it’s an English school and my son loves it there. Football is going well for me so that makes it all easier!

“I get the little’un ready for school, drop him off and take the dogs for a walk in Mount Parnitha as there’s a lot of stray dogs about so I can let my old but boisterous Boxer and Shih Tzu off the leads. It’s then home and chill really until training at 3:30 although in summer months that’s 7:30 p.m. so I could probably throw a beach or pool in there somewhere!

“I’m currently contracted until the end of the season but it has been hinted that the club want to renew it which is great news, but nothing is done until the ink is dry so I can’t really plan anything yet. I hope to stay here as I’m settled, as are the family, and it’s not as far as the trip from Manchester to Southampton by car so family and friends are here every other month.”

Having completed half of a four-year physiotherapy degree (on hold while he plays in Greece of course) Wayne had the objective of working as a children’s physio in hospitals or private centres, and this is backed up by one or two other ambitions, the last of which is probably easily attainable!

“I’ve nearly finished my UEFA ‘B’ coaching badge, I just need to do my final assessment but that’s a bit tricky at the moment so I hope to get that done before May. I love golf, coarse fishing, and I’m a bit of an Xbox, well ‘Call of Duty’ addict.

“I like to read, Terry Pratchett is a favourite author, as well as business and financial books by the likes of Robert Kiyosaki. My main ambitions are basically to stay fit and healthy, to play for as long as possible and to try to get 5000 Twitter followers ASAP!”